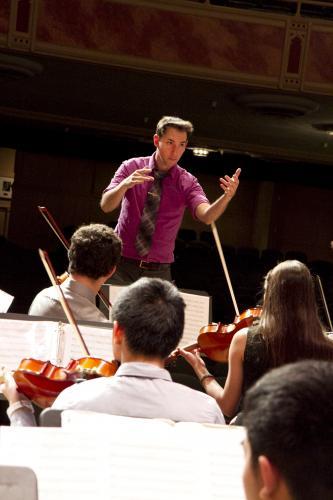 A native of Sacramento, John Cargile earned his BA in Music from UC Davis in 2008 studying Music History with a focus in Ethnomusicology. He then moved on to studying for his California Teaching Credential at CSU Sacramento before accepting a position as a graduate teaching assistant and enrolling in the Masters’ program in Music Education at the University of the Pacific’s Conservatory of Music. At Pacific, John honed his conducting and teaching skills under the tutelage of director Eric Hammer while given leadership of the University Concert Band during the 2010-2011 year.

In addition to working with university students, John also taught in the Davis Joint Unified School District for two years, working with the esteemed band directors at Davis Senior High School and Holmes Jr. High. At Jesuit, Mr. Cargile teaches the beginning band and string ensembles as well as some of the school’s most advanced ensembles: the Symphonic Band and JHS Symphony Orchestra.