Do Catholic Schools Really Matter? Catholic schools had a profound affect on Eric Jackson ’09, who lives out his faith with enthusiasm and real-world application. 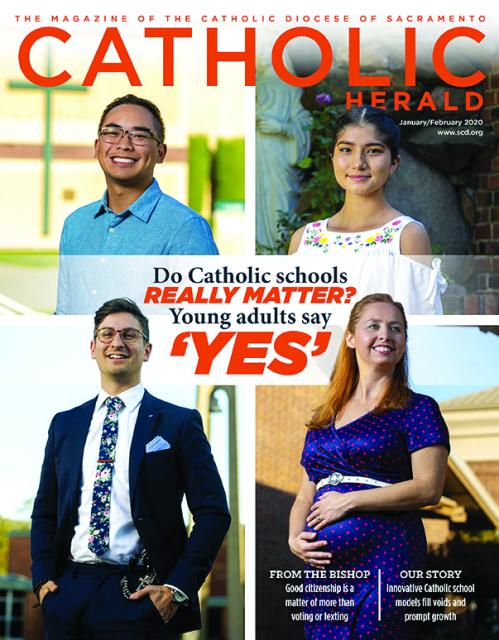 No doubt, Catholic graduates make a positive contribution to society and are more likely to practice their faith as young adults. Studies conducted in the past ﬁve years by the Center for Applied Research in the Apostolate (CARA) at Georgetown University show that among millennials (young adults born since 1982), there is a strong correlation between Catholic education and Mass attendance, with Catholic-educated young adults more than six times more likely to attend Mass weekly, participate in their parish, volunteer and tithe. Twenty-three percent of millennial Catholics have attended a Catholic elementary school at some point in their lives.

“Many of the values I live out daily, I attribute to my Catholic education,” says Eric, who lives across the street from St. Dominic Parish in San Francisco, where he has been actively involved in young adult ministry since 2016. He is also a young adult ministry representative to the Archdiocese of San Francisco, helping to organize events for young Catholic professionals in the city.

“The commitment to serving others,
especially serving the poor and working for social justice are ingrained in me from Catholic schools,” he says. But despite these particular values emphasized throughout his early years, he says his true understanding and praxis of the faith didn’t come until after his ﬁrst 12 years of Catholic education, and it was through devout Catholic peer groups outside of the classroom.

“The challenge for Catholic schools today is not only to instill these universal values of ‘compassion for others’—values held even by the secular world—but to truly teach children about the doctrines of the church and to form them as knowledgeable, practicing Catholics and ultimately, future saints,” he says.

He graduated from St. Francis of Assisi School in Sacramento in 2005 and Jesuit High School in Carmichael in 2009. From Boston College, a Jesuit university, he received a bachelor’s degree in philosophy and theology in 2013 and a master’s degree in linguistics in 2015.

He was baptized at St. John Vianney Parish in Rancho Cordova and received the sacraments of ﬁrst Eucharist, reconciliation, and conﬁrmation while at St. Francis School. His “ﬁrst conversion” experience was during the eighth grade, after having some in-depth conversations at home with his father, “opening up the Gospels to me as life lessons,” he says.

Eric chose to attend Jesuit as his father is an alumnus. “I knew of its reputation for academic life, spirituality and service,” he says. “I started to grow deeper in my faith and encounter the great thinkers of the Western world for the ﬁrst time—Plato, Aristotle and St. Thomas Aquinas—and opened up to the great philosophical and theological traditions.” He was involved in many service projects, including volunteering at Loaves & Fishes charity and other urban immersion experiences. Eric says he didn’t come to fully know and love the sacraments, especially the Eucharist and reconciliation, until he was in college and as a young adult.

“The peer groups at Boston College were amazing,” he recalls. “I met other faithful, devout Catholics who taught me more about the sacraments and the liturgical life of the church.”

He currently is a linguist and brand strategist at Salt Branding in San Francisco. Sometimes his coworkers ask him questions about this faith and he is happy to share with them.

“My desk is covered with cruciﬁxes and icons, so people know I am Catholic. Some coworkers have questions about the faith or share a story with me. I’m very much into expressing who I am and not ashamed of the Lord or the cross. Our goal as Catholics is not to be just an ‘in club.’ Our mission is that we are sent out into the world. I pray that I can evangelize even in the context of a secular job.”

His advice to Catholic young adults who are estranged from their faith or the church? “I ask them a very simple question, using words from the Lord himself,” Eric says. “The ﬁrst words Christ utters in the Gospel of John occur after he was baptized in the Jordan. He simply says to the two disciples following him: ‘What do you seek?’ So I say to young adults: What are you looking for? What do you want? What do you long for? Is it community? Friendship? Human connection? Beauty? Love? If you long for these things, I invite you to hang out with me and my friends. Come to church, which is the source of all those things.”

In the past year since the Catholic Herald article was published, Eric married his fiancé Andrea, in the midst of COVID-19 restrictions. Originally planned as a July wedding in San Francisco, they finally wed in September on the Feast Day of the Most Holy Name of Mary in Sacramento, where they could be married in the church and have a small outdoor reception with family and friends.

Eric adds, “And in this Year of St. Joseph, initiated by Pope Francis, we, too, ask St. Joseph’s intercession as protector of Holy Mother Church and terror of demons to guide us through this next year, and to protect our new family as a strong and loving father.” 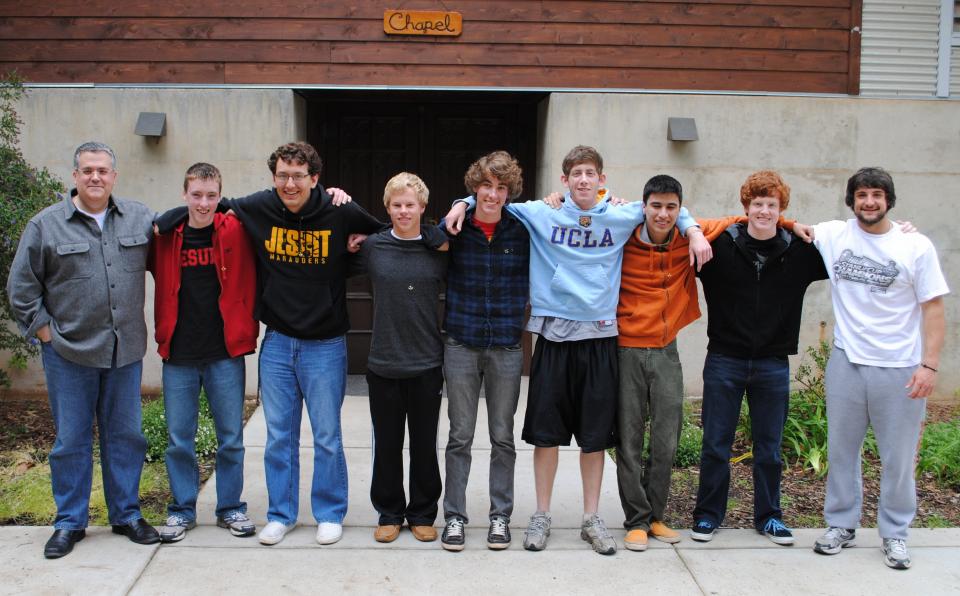 Campus Ministry’s primary concern is to prepare each young man for life, leading him to become a faith-filled and value-centered person, within the model of Jesus Christ, centered in our Roman Catholic heritage, and in the tradition of Ignatius of Loyola. All of the religious activities at Jesuit are designed to respect each person’s religious tradition.

Campus Ministry dedicates itself to the task of bringing out in each person those spiritual gifts that lead people towards deeper love of self, others, and God in the building of God’s Kingdom.