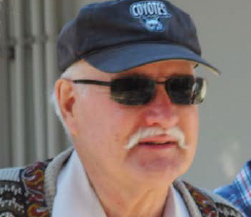 There’s a common thread in the life of Greg Huckabee ’68, and it’s a lesson that he learned while studying at Jesuit High School: life is about service to others — not consumption, but contribution.

That theme was present at Huckabee’s many different stops in life. Huckabee has worked all over the world and held some of the most interesting job titles you’ll ever see, all while obtaining a bachelor’s degree, three master’s degrees, and three law degrees.

Huckabee has worked in Puerto Rico, Poland, Germany, South Korea, and all over the United States. In each of his stops, he tried to make the situation around him better than it was when he arrived. Huckabee retired from the military in 2003, and immediately sought a position in academia. He had enjoyed his time teaching cadets, and found a job (through an old army connection) at the University of South Dakota. He was selected as the University’s Teacher of the Year in 2004 and went on to serve on the Board of Regents at his alma mater, Gonzaga University, in 2007.

For his 50th high school reunion, Huckabee made the trek to Sacramento from South Dakota, arriving in astonishment of how much the school had grown since his last time on campus in 1968.

“I couldn’t find my way around,” Huckabee said. “I just kept walking around saying, ‘Wow!’ You could tell that there was a lot of commitment and generosity that produced all those newer buildings, because we didn’t have squat.” Walking the campus for the first time in 50 years allowed Huckabee to take a long overdue trip down memory lane. Huckabee was one of the first members of the wrestling team in 1967 and was a JUG “champion” for being late and forgetting homework — proving that some things at Jesuit never quite change. Huckabee also remembers the hard work and ambition that consumed him and his 1968 classmates. “The hard work at Jesuit is what made it special. It wasn’t easy, but we were committed,” he said. “Jesuit taught us to think critically.”

In the Jesuit tradition, Greg Huckabee has lived his life in pursuit of knowledge, with a dedication to excellence and a spirit of service — truly a Man for Others.