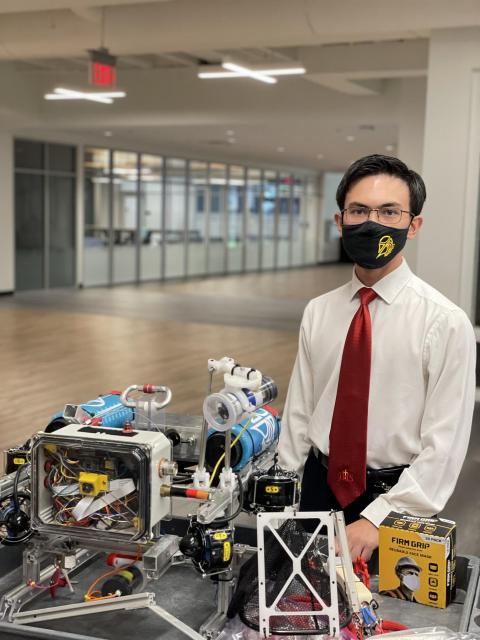 Charlie Diaz ’22 is a well rounded student, a hard worker, and an accomplished individual. Along with being the CEO for Jesuit Robotics, Charlie is a finalist for the National Merit Scholarship Program, and has had his AP Research project published in the Journal of Student Research.

Charlie has been active in the Jesuit community through Jesuit Robotics, volunteering for the ground crew, and keeps a strong desire to grow in knowledge. Jesuit Robotics is something that has meant a lot to Charlie, and has also opened up a lot of opportunities for him throughout his four years here at Jesuit.

“Robotics has been the single most important part of my high school experience,” Charlie said. “Through robotics, I met amazing mentors and peers who taught me almost everything I know about engineering and teamwork.”

Because of robotics, Charlie has learned many lessons from his personal experience and collaborative work.

“What I learned in robotics can’t be written in a textbook or taught in a class,” Charlie said. “The first hand experience I gained laid a foundation for my understanding of not only how mechanical systems work, but how a group of individuals can come together to achieve something great.”

This year, Charlie wanted to be a big brother, but unfortunately he was unable to sign up due to being busy from his work with the robotics team and robotics summer camp. This ultimately led to his decision to join the ground crew. As a member of the ground crew, Charlie noticed how he has truly been a part of something unique throughout his four years.

“Working there you could really tell the Jesuit community has something special,” Charlie said. “It’s really deeper than just a high school. It’s a community of people who have shared interests in being men and women for others.”

Along with participating in Jesuit’s special community, Charlie learned a lot from his teachers. One of the teachers who left a strong impression on him was Assistant Principal for Academics and AP Research teacher Mr. Colin O’Connor ’04.

“I feel like [Mr. O’Connor’s] guidance has had a huge impact on what I think is possible,” Charlie said. “At the outset of AP Seminar, I wouldn’t have imagined that I would have been about to write, you know, ten pages about my whole life. Whereas at the end of AP Research I wrote 30 pages about this super, hyperspecific motor experiment that I ran, [and Mr. O’Connor] really helped me through that.”

Mr. O’Connor noticed how Charlie was always willing to learn and always asking questions on certain topics to deepen his understanding. He learned that Charlie never stops searching for more and being open to learning new things.

“Charlie is highly inquisitive which in the classes I taught him, the AP Seminar and AP Research, those are the number one most important qualities to have, to be able to engage in a line of inquiry that the student comes up with,” Mr. O’Connor said.

“He built the housings and he built all the mechanisms he used in order to test their efficacy,” Mr. O’Connor said. “He was the only student in AP Research last year who did any experimental design, most students were doing correlational design or descriptive designs so it was really fun to see him get to tinker.”

Charlie turned his interests into an impressive project, submitting it to the Journal of Student Research, an academic journal that is faculty-reviewed, that aims to spread information about what students have researched. His paper has now been published in the 4th issue of their 10th volume.

Along with being a great student and engineer, Charlie has been able to build relationships with people, and grow close with others based on their common interests.

“I met Charlie at Jesuit; I hadn’t known him before then,” said Brandon Shihabi ’22. “The most significant way that we have gotten close during our time at Jesuit has been by talking about the different projects he has worked on and brainstorming ideas for cool robots for him to build.”

Brandon also attests to Charlie’s many interests, which he loves to share with others.

“I think Charlie has qualities that make him not only an interesting person but a great friend,” Brandon said. “He has so many things to talk about, ranging from his robotics knowledge to his experience around planes to even his ability to make origami cats.”

Although it may be a common theme among seniors, the community and brotherhood Jesuit creates is a feeling Charlie hopes to continue to take with him in the future.

“I hope what I take away from my time [at Jesuit] is a sense of community, being a part of something,” Charlie said.

After his time at Jesuit, Charlie hopes to major in physics as he is driven by his interests and desire to continue his education.

“I want to study physics,” Charlie said. “I want to get a degree in physics, and then I want to take that and then continue my education in graduate school and try to learn about nuclear fusion reactors.”

Charlie is a strong student, with a deep passion for robotics and physics. Whatever plans Charlie has for the future, the Jesuit community can be sure that he will be successful and bring his deep interests and personality with him.