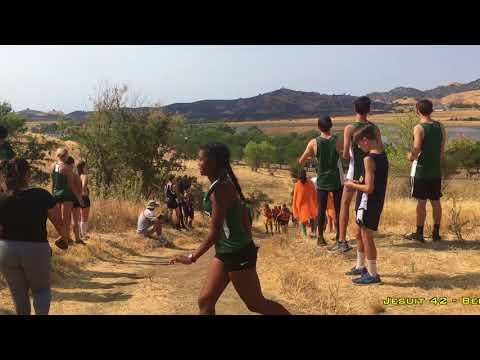 The cross country teams opened up the competitive season with team wins at 3 out of 4 levels at the Lagoon Valley Classic in Vacaville. The varsity squad scored a mere 39 points in their convincing win over second place Bella Vista and third place Davis by running over 2 minutes faster than their competitors. Junior Matt Strangio was challenged early but won the race in 15:39 while seniors Colin Ryan and Antonio Vargas showed the strength of the team by finishing 3rd and 4th overall in 16:09 and 16:11, respectively. Miles Worthen began his senior campaign with a 13th place finish in 16:37 and senior Colin Brannan rounded out the scoring in 18th in 16:46. Senior Anthony Rogado continued to impress in 24th, running 17:05, and senior Gabe Lovely finished 28th in 17:14. Senior Seamus Caslin individually earned a medal in 38th.

The junior varsity squad scored a near-perfect 18 in their win over Davis and Bella Vista on the 2-mile course. Juniors Connor King and JT Leach battled for 2nd place for the entire race with King crossing the line in 11:45 and Leach in 11:46 for 3rd. Junior Martin Smith placed 4th in 12:03 and senior Bobby Canalas placed 6th in 12:05. Junior Demetri Petuskey closed out the scoring in 9th in 12:28 and junior Eric Huitt (12:33, 11th) and senior Russell Kustic (13th, 12:37) finished before Davis’ 4th man all other teams’ 2nd man. Talon Krieger also individually earned honors in 25th.

The freshmen squad got a taste of the excitement in their first competitive outing in red and gold. In a tight-scoring race, Bella Vista put two runners ahead of Davis’ top two, followed by Jesuit’s number one Tyler Offerman who placed 7th in 12:19. Bella Vista then put in their third, but Jesuit responded with a sweep of the next 4 places in 9th through 12th to complete their scoring five. Gavin Joaquin led the way in 12:25, followed by Joey Ryan and Ian King in 12:26 and Spencer Morrison in 12:27. Davis put in another two runners with a Bella Vista athlete sandwiched between, and Jesuit’s Cameron Cleland (12:40) and Harley Sherman (12:42) inflated the scores of the opposing teams by finishing before their scoring 5. Jesuit and Bella Vista both finished with 39 points with Davis back with 51, but with tie-breakers going to the 6th man, Jesuit took the title. Showing their depth by individually earning medals were Julian Curiale, Tomas Penner, Diego Levenfeld, Ryan Anderson and Drew McDonald.