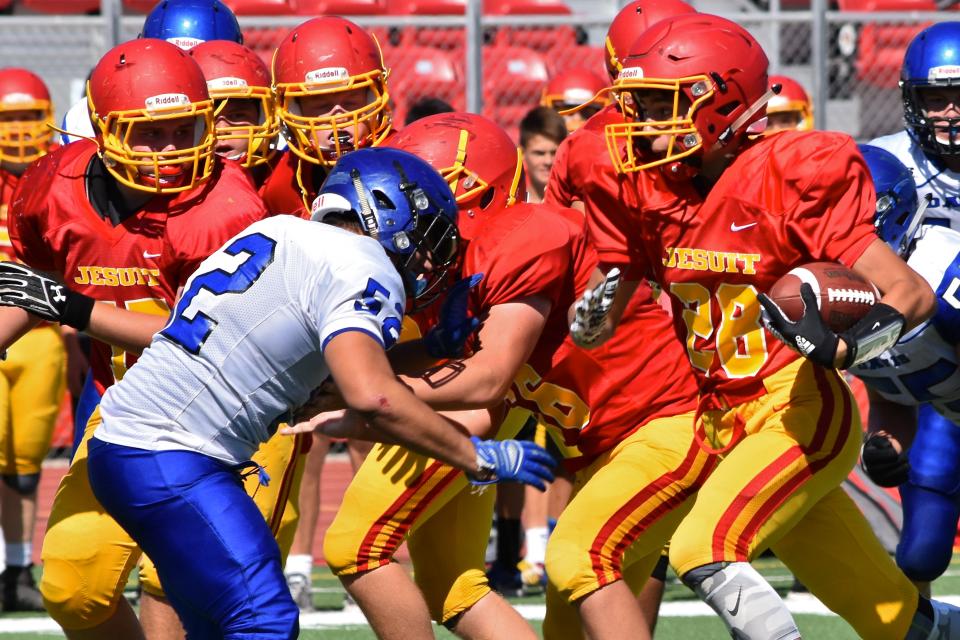 A warm and comfortable Saturday morning game time was set for the Homecoming battle between Jesuit and Davis. Looking to avenge three years of loses, the JV squad was ready to square off with the Blue Devils form over the causeway to start homecoming weekend on a winning note. The first half was a tug-of-war between the two run focused offenses. Jesuit put themselves in a hole by committing another early game turnover by failing to recover the opening pooch kickoff.  The Blue Devils were able to recover the kickoff and start the game with a first down in Jesuit territory. Davis initiated their strong running attack on their first possession pounding the ball between the tackles for solid gains resulting in an early Davis touchdown and after a failed PAT attempt, the Blue Devils led 6 – 0 early in the first quarter. Jesuit answered back on their first possession. Daniel Susac started with a pass to Jacob Hall for 23 yards. The Marauders then went to own dominating ground game and the running back tandem of Kiran Reddy and Ace Saca chewed up yards behind the tough Jesuit O-line.  Reddy cashed in the hard fought drive from five yards out to put Jesuit on the board.  A successful PAT by Gabe Neumann put Jesuit in front 7 – 6 with 4:19 left in the first quarter. Davis went back to work and continued to execute several downhill runs and converted another touchdown. After a good PAT Davis took the lead 13 -7 with just over a minute left in the quarter. Jesuit went back to work with a methodical 13 play drive. Susac completed two passes to Hall for 27 and 22 yards to move Jesuit into the Davis red zone. After three incompletions and a penalty, Coach Salais decided to go for it on fourth and 13. Susac found Cooper Shults down the sideline for an excellent pitch and catch for a 24 yard touchdown. Another Neuman PAT and with 7:38 left in the half Jesuit had the lead back at 14 – 13. The Jesuit defense was able to slow down the David ground attack and force Davis to punt on their next possession following an outstanding pass deflection by Nick Blake and tackles for loss by Zack Bagley and Hunter Donelson. Jesuit took over on the 34 yard line. Susac picked back up where he left off and hit a streaking Cooper Shults for 38 yards to start the next drive. Two plays later Susac hit Shults again. This time when it looked like Shults was stopped for a modest gain as he was hit the Davis 13 yard line. However Shults shakes off several tacklers and carried a Davis defender the last 10 yards into the end zone. After the Neuman PAT Jesuit had increased their led to 21 – 13 with 1:44 left until halftime. With just over a minute left in the half Davis was able to convert several big run plays to score just before the end of the half. A two point conversion tied the game at 21 going into half.

Jesuit kicked off to start the second half and Davis continued to pound their run game. After a nine play drive they punched it in to take the lead Davis 27 – Jesuit 21 with just over 5 mins left in the third quarter. Jesuit answered with a ground pounding drive of their own. Kiran Reddy lead the ground attack and capped the drive with a punishing 10 yard touchdown run of his own. Mr. Automatic, Gabe Neumann converted another PAT for the lead; Jesuit 28 – Davis 27 with 2:43 left in the third. On the ensuing kickoff Neumann executed an excellent pooch kickoff, which Josh Drinen recovered giving Davis a little payback for the opening play of the game. The Big Red offense went back to work with Susac leading the team on another scoring drive. Susac hit Zach Bagley for 12 yards followed by tough runs by Saca and Reddy to set Jesuit up with first and goal. Susac rolled out under pressure and hit Logan Marks for an excellent toe-tapping catch to stay in bounds for a six yard touchdown. A good PAT by Neumann and Jesuit extended their lead to 35 – 27 lead with 1:04 left in the third. The fourth quarter belonged to the Big Red defense. Davis’s two possessions resulted in a stifling Red Brick Wall stopping the Blue Devils on two fourth downs, including another big sack by Bagley to put the ball back in the hands of the Marauder offense. After trading possessions for half of the quarter Jesuit punted the ball for the only time all game. The Big Red defense held again thanks to the second impressive pass deflection by Grant Flesher and big tackles by linebacker Soren Peterson. The Jesuit offense started their last possession with five minutes left in the game.  The O-line and running backs took over.  After eight punishing time eating runs by Saca and Reddy, the Davis dreams of an upset were over.  They wouldn’t be allowed to possess the ball again and Jesuit lined up in the Victory formation at the Davis nine yard line to run out the clock and bring this homecoming game to a close.  FINAL Jesuit 35 – Davis 27.