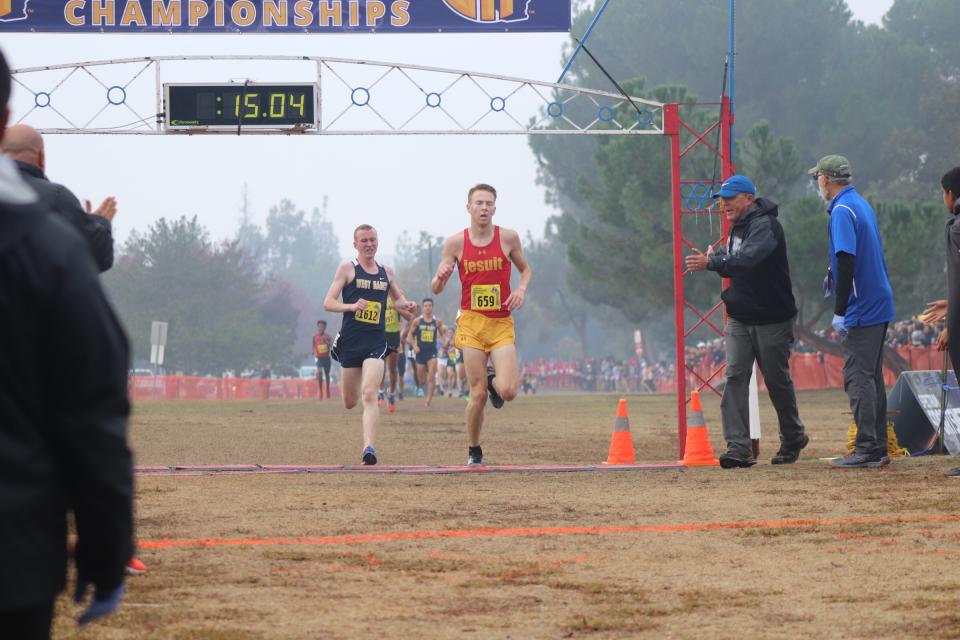 The 2018 Cross Country season culminated at the CIF State Championships where junior Matt Strangio led the team to a 5th place finish in the Division 1 race and won the individual title, covering 5K in 15:04. Strangio went with the lead pack from the gun, coming through the first mile in 4:45 with another 45 runners coming in under 4:50. The pack whittled down to 10 by the 2 mile with Strangio sitting in 3rd behind senior William Frankenfeld of Long Beach Poly and senior Jonathan Velasco of Mission Hills. Frankenfeld pushed the pace with only Strangio and senior Evan Bates of West Ranch able to keep up with half a mile to go. In the final stretch, it was down to Bates and Strangio with Strangio taking the win by 0.8 seconds, 15:04.5 to 15:05.3. Strangio is the second Jesuit athlete to win an individual state title in Cross Country with the first being Matt Farley in 1993 in a time of 15:06. Strangio’s finish ranks him 4th all-time for Jesuit on the Woodward Park course. Strangio was recognized as an All-State athlete and earned a bid to compete at the Nike Cross National Meet in Portland for the second year in a row.

Strangio will compete individually for a national title at Nike Cross Nationals next Saturday, December 1, in Portland where he placed 15th as a sophomore in 2017.