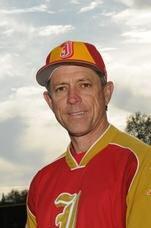 Joe serves as Jesuit High School’s baseball coach. He has been a member of the coaching staff since 1986. In addition to baseball, Joe coached freshman football from 1989-1992 and freshman basketball from 1991-1992. Prior to coming to Jesuit, Coach Potulny coached at the University of San Francisco as a graduate assistant in 1981. Later, Coach Potulny traveled to Wisconsin and was an assistant coach for the La Crosse Loggers in the Northwoods League, a summer collegiate league, from 2008-2012.

Coach Potulny has led Jesuit Baseball to  many titles:

Coach P shares his coaching philosophy. The field is an extension of the classroom. We are asking our players to be present with maximum focus for every repetition during practices and games.  No detail is too small.  Use your God-given athletic abilities to their fullest. We are process oriented. Positive outcomes are the end result of consistent repetition during practice time.

Joe mentions enjoying so many great coaching moments. Robbie Bystrowski ’95 scoring from first base at 1:00 am to earn the first trip to a Section Final. Bystrowski stealing home one week later for Jesuit Baseball’s first Section Championship. J.P. Howell ’01 pitching 49 consecutive innings without allowing an earned run on his way to becoming the State Player of the Year. The 2008 team competing with Buhach Colony in a classic three game series for the Section Title. Perhaps the greatest array of talent ever produced by two teams in the history of the Section Final. The 2009 team and their commitment to repeat as Section Champions was a great moment too.