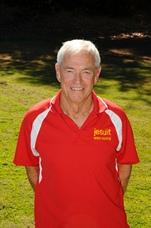 Walt was a competitive distance runner, competing at the high school, college, and post-college levels in track, cross country, and road racing from 1958-1983.

Walt’s coaching philosophy is that Jesuit Cross Country invites all those willing to make the commitment to daily pracitce. Everyone competes, no one sits on the bench. Cross country runners are challenged to reach their potential as athletes, students, and members of the Jesuit High School community, and have fun while doing it.

He adds that there are too many coaching moments to single out any specific athlete, but any runner reaching his potential on the competitive field has provided a great coaching moment.