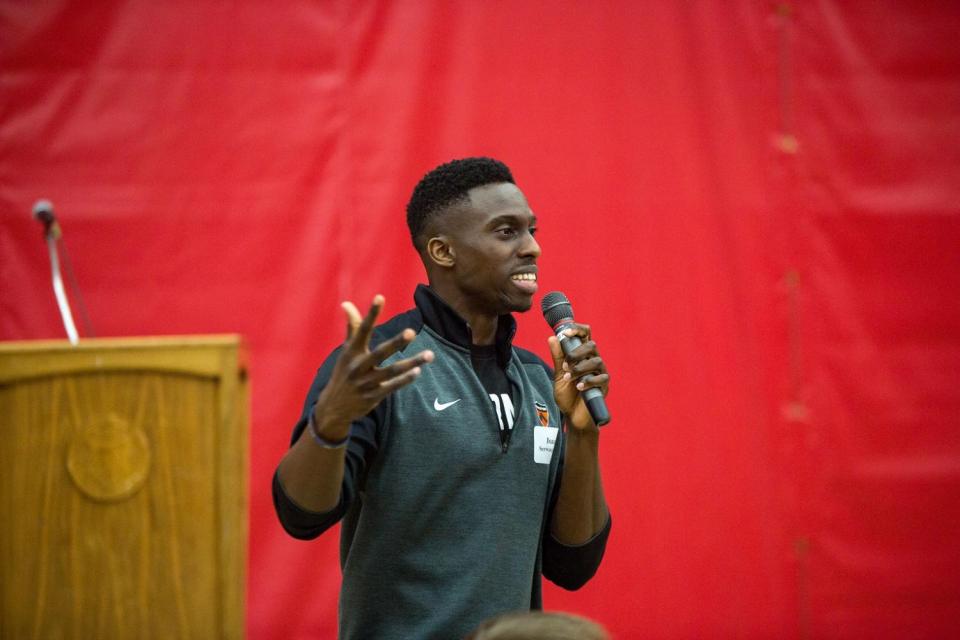 Isaac Serwanga ’08 is a motivational speaker, author, educational consultant, and advocate for the personal and professional development of high school and college-age students. He has spoken throughout the country to high school, college, and corporate audiences on topics such as personal branding, networking, and motivation.

While attending Jesuit High School, Isaac was involved in a variety of school activities. In particular, he was the president of the Black Student Union, a distinguished member of the National Honors Society, and a three-sport varsity athlete competing in football, basketball and track & field.

After attending Jesuit, Isaac went to Princeton University and graduated in 2013 with a degree in sociology. Since then, he has written the informational book “How to Network in College,” which educates college-bound students on the principles of networking.

Isaac explains how Jesuit helped him grow and excel in academics and sports.

“[Jesuit was] challenging & fulfilling, which is exactly what the school promised,” Isaac said. “I wouldn’t consider myself the most talented, but I did always strive to fill my plate academically, athletically and socially—and Jesuit made that very possible. I enjoyed being a part of the varsity football, basketball and track & field team brotherhoods.”

Isaac also elaborates on how Jesuit prepared him for his entrepreneurial journey.

“Jesuit demands a lot from you; the more ambitious you are, the more challenging,” Isaac said. “Very few high schools in the country create a community that understands the power of networking like Jesuit High (i.e. JHS Career Day every spring is a phenomenal event for students to network with alum like myself).”

Mr. Greg Harcos ’89, Isaac’s former coach at Jesuit, explained how Isaac was able to learn from his mistakes in high school and become a better leader.

“The lessons of struggle that he learned in high school gave him a better understanding of how to lead and what leadership really is and why it is needed,” Mr. Harcos said.

“Isaac has never been content to get by but has always applied himself with a strategic discernment of where he is, what he has, what he wants to accomplish, where he wants to be, and what he needs to do to get there,” Mr. Hornback said.

Many students at Jesuit look at Isaac as a role model, a peer tutor and a mentor. He has answered the call to serve young students and will continue to speak throughout the country to high school and college students about improving their futures.