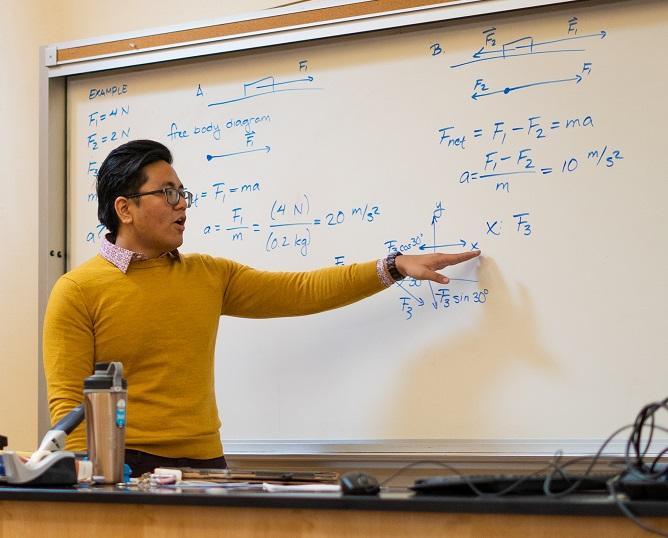 Following high school, Mr. Vergara continued his Jesuit education at Fordham University in New York, where he earned his undergraduate degree in music and physics.

After his time at Fordham, Mr. Vergara went to Hofstra University for grad school. At Hofstra, he studied medical physics, conducted research, and taught classes before deciding to return to his high school alma mater.

With his previous perspective as a student, Mr. Vergara is still adjusting to life as a teacher, but he is grateful to be back in the Jesuit community.

“I work alongside 13 [of my former teachers], in addition to one of my former high school classmates, Mr. [Patrick] Williams,” Mr. Vergara said. “I’m still getting used to the idea of calling them my colleagues, but they and everyone else in the faculty and staff have been nothing but supportive and welcoming!”

Ms. Julia Yang, who was Mr. Vergara’s science teacher, recognized his work ethic and talent as a student, and has only esteem for him as a colleague.

“Mr. Vergara brings with him a wealth of knowledge,” Ms. Yang said. “He also embodies the ideals of a man for others, so I’m sure our students will be well-served under his care.”

Students and teachers share in their warm reception of Mr. Vergara. One of his current students, Aidan Goveas ’20, is enthusiastic about the opportunity to be a part of Mr. Vergara’s class.

“[He’s] really energetic and a fun guy to be around,” Aidan said. “He loves music, and he’s an incredibly smart man. We have a pretty relaxed environment in class, but at the same time, we are working hard and learning a lot.”

At Jesuit, Mr. Vergara instructs juniors and seniors in AP Physics 1 and 2 and enjoys teaching the subject.

“There’s a sense of discovery and magic when students suddenly become mind-blown when they realize something new about the world around them because of physics and math, and it is those tiny moments of revelation that, as a physics teacher, make me smile,” Mr. Vergara said.

Mr. Vergara wants his students to develop new perspectives and a creative mind for solving problems. He desires that the knowledge his students obtain isn’t just temporary, but that they carry it with them for the rest of their lives.