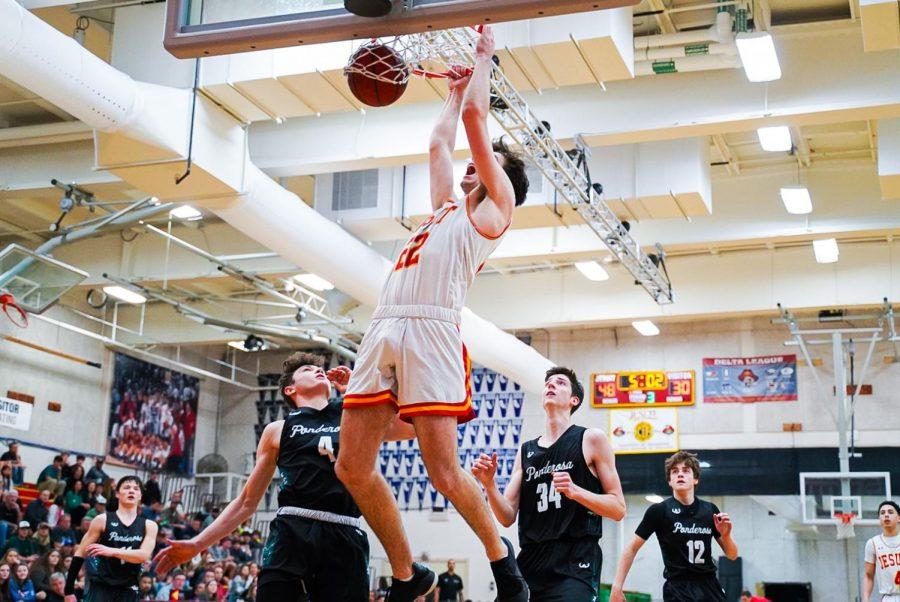 Jesuit High School Sacramento showed why it’s the No. 1 seed in the Division II Sac-Joaquin Section Playoffs when the Marauders handily beat the Ponderosa High School Bruins in the second round of playoffs on Friday, Feb. 21.

The Marauders took an early lead against the Bruins. The Bruins responded near the end of the first quarter, slipping in three 3-point shots in a row to pull ahead. Before the quarter’s end, Jesuit took a 1-point lead, ending with the first quarter with a score of 18-17.

In the second quarter, Jesuit scored nearly 20 unanswered points before the Bruins were able to respond. Jesuit had a 38-26 lead at halftime.

In the second half, the Marauders continued their dominance, subbing in their third-string players after taking a comfortable lead. Jesuit went on to defeat the Bruins 83-59.

Point guard Isa Silva ’21 achieved a double-double on his stat sheet with 25 points, 10 assists, and 5 rebounds.

Varsity Basketball Head Coach Tim Kelly attributed the win to the players fulfilling their assignments and carrying out the game plan.

“I was really proud of our team during the [PHS] game,” Coach Kelly said. “It was a very balanced effort. Guys [played] within our system and played unselfishly. It was a fun night.”

Jesuit’s next game is against No. 5 seeded Saint Mary’s High School from Stockton. Despite the solid win on Friday, Coach Kelly thinks that there’s some room for improvement before the upcoming match.

“Playoff basketball is all about defense and rebounding,” Coach Kelly said. “We need to continue to improve in those areas. [SMHS] is a really good team. We are going to need to be at our best.”

If the Marauders defeat Saint Mary’s High School, they move on to the section championship. The game is at home on Tuesday, Feb. 25 at 7 p.m.