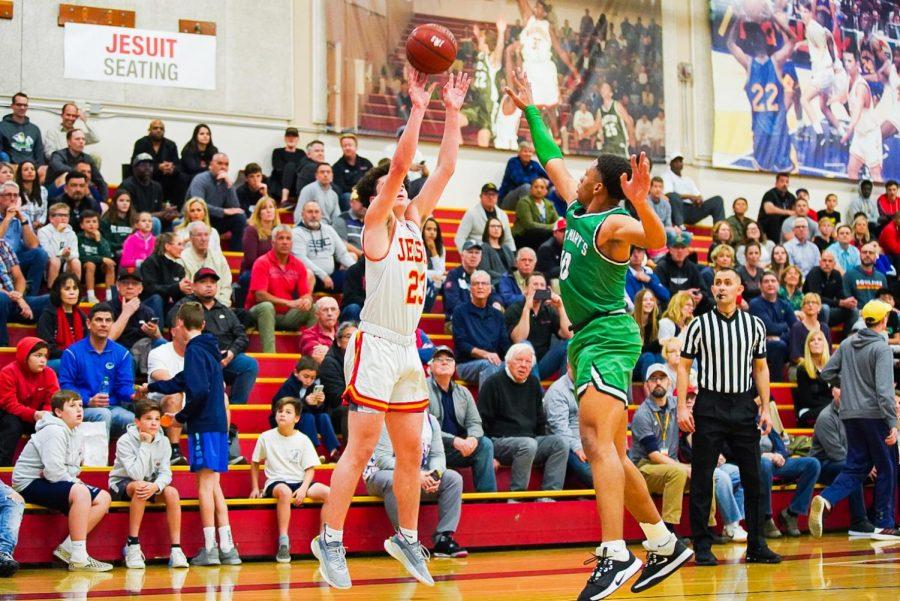 In a semifinal clash between the No. 5 seeded Saint Mary’s High School Rams and the No. 1 seeded Jesuit High School Sacramento Marauders, the top seed was knocked out of the Division II Sac-Joaquin Section Playoffs with a 42-48 loss on Tuesday, Feb. 25.

In a contest that demanded physical talent as well as mental fortitude, the game was a back-and-forth effort. Both teams saw chances, comebacks, and leads erased before the Rams solidified the win in the final two minutes.

Across the first two quarters, Jesuit saw continued deficits before Gabe Dirksen ’21 gave the team a 22-21 edge heading into halftime. By the end of the third quarter, Jesuit had sharpened their defense and found ways to make offensive plays, amassing a narrow 32-30 lead.

Varsity Basketball Head Coach Tim Kelly explained the process of working through those comebacks and the difficulty of the situation.

“We talked about staying with our process and staying present with each possession,” Coach Kelly said. “We just had a hard time scoring that night.”

Guard Isa Silva ’21 made a determined effort in the fourth quarter, scoring with a layup and delivering a clutch “and-1” free throw to give Jesuit a 41-37 lead with the clock ticking into the final three minutes. But as the night had proven, no lead was safe, and the Rams, led by senior Jamar Marshall, scored 11 points to deny Jesuit a spot in the final.

Guard Chris Holley ’21 notes the team’s missed opportunity to control the moment, something that they will learn from.

“What we will learn from this loss is to never let our foot off the gas and always keep applying pressure and to not lose our intensity,” Chris said.

As Jesuit basketball transitions to NorCal, Coach Kelly hopes the team uses the lessons from the loss to rebound at their final tournament.

“Hopefully, we learn some lessons from this game about managing the clock and can win a few games in the NorCal tournament to make it interesting,” Coach Kelly said.

Jesuit awaits their next opponents as the bracket for the NorCal Championships will be announced Sunday, March 1.