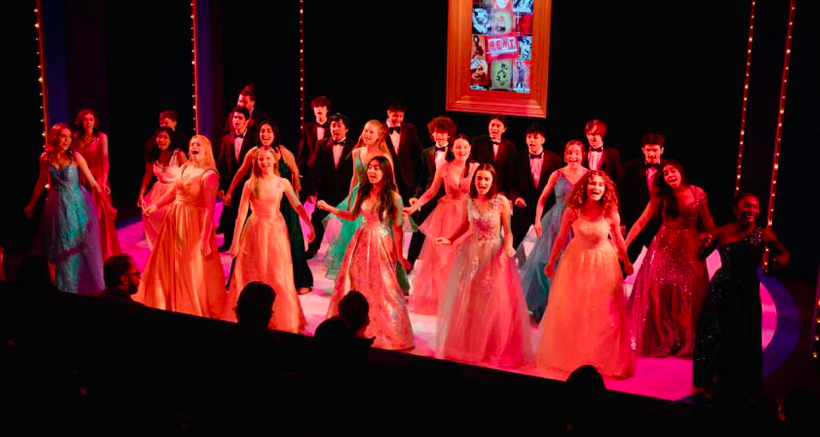 This spring, the musical was called “Hits! Great Songs From Great Shows.” It featured a series of multiple hit songs from different musicals, including “You’ll Be Back” from “Hamilton,” “Seasons of Love” from “Rent,” “One” from “A Chorus Line,” and “Only Us” from “Dear Evan Hansen.”

Director of Drama at Jesuit, Mr. Ed Trafton ’84 explains how the idea for “Hits!” came to be.

“We realized that doing a traditional ‘book show,’ a musical that has prescribed characters and a plot, would be challenging, if not impossible, given pandemic conditions,” Mr. Trafton said. “We needed to do something that was flexible and modular, something that featured self-contained parts, to deal with the many absences due to illness and quarantine. The revue format of ‘Hits!’ allowed us to do just that.”

Along with planning and directing, Mr. Trafton also contributed to the live music during the shows.

“On this production, I had lots to do!” Mr. Trafton said. “As the artistic director of Jesuit drama, I’m chiefly responsible for the overall drama program: play selection, budgeting, hiring, design, communication, etc. I also am the stage director, meaning I rehearse, stage and coach the actors during rehearsals. For this show, I was also one of the music directors, and I played the piano with the show’s band.”

The musical was more than just a show to present to the audience but also a way to share works of art that hold special meaning. Mr. Trafton shares part of his inspiration for the musical and the sentiment it holds.

“Arguably the greatest musical theater composer, Stephen Sondheim, passed away last year,” Mr. Trafton said. “And my favorite part of the show was our simple tribute to him as we performed ‘Sunday’ from this Pulitzer Prize winning musical ‘Sunday in the Park with George.’ It was a very tough song to learn, but worth it.”

The whole cast put in many long hours of practice and rehearsing to make the musical one to remember. Dance Captain Jack Hemmert ’22, also a Jesuit varsity football lineman, details how much work was put into their weeks of preparation.

“We spent a lot of months preparing for this, longer than football practices,” Jack said. “It was three hours everyday, so a lot of hard work came into this through rehearsals, through tech week, dress rehearsals all led up to opening day and we’re rolling through.”

To ensure that the stage would amaze the audience, many careful considerations were made to enhance the performance. Stage Manager Griffin Achondo ’23 speaks on how much hard work and effort was put into planning and laying out the musical.

“Rehearsals, it’s like getting there 30 minutes to an hour early depending on what we have to do to set up,” Griffin said. “Then we set up. We prepare for the cast and then depending on what we are doing that day we either take blocking notes, so if we needed to add people to a scene or number in this case, it would be a lot easier than to try and remember where people go. Then staying an extra 30 minutes and just reflecting on the rehearsal afterwards.”

After almost 2 years of not being able to put together an in-person musical, the Black Box Theater returned to being filled with lively and passionate performers and an excited and anticipating audience. Mr. Trafton shares what his goals and hopes for the musical were in spite of the COVID affected world.

“At the information meeting we had about the musical late last winter, I told the students who were there that the goal of this show was two-fold: to gather people back together in our Black Box and to perform a show that moves them in some way,” Mr. Trafton said. “This pandemic has challenged all of us, numbed us, exhausted us, and robbed us of a lot of joy, and I fear sometimes that in an effort to move forward and repair all that’s been damaged, we haven’t fully acknowledged or admitted just how hard this time has been.”

“Hits! Great Songs From Great Shows” was a heartfelt and meaningful performance given to the audience as a gift from the drama team. It was successful in bringing life back to the Black Box Theater after a long period of inactivity. Fans eagerly await the next hit that the Jesuit drama team has to offer.