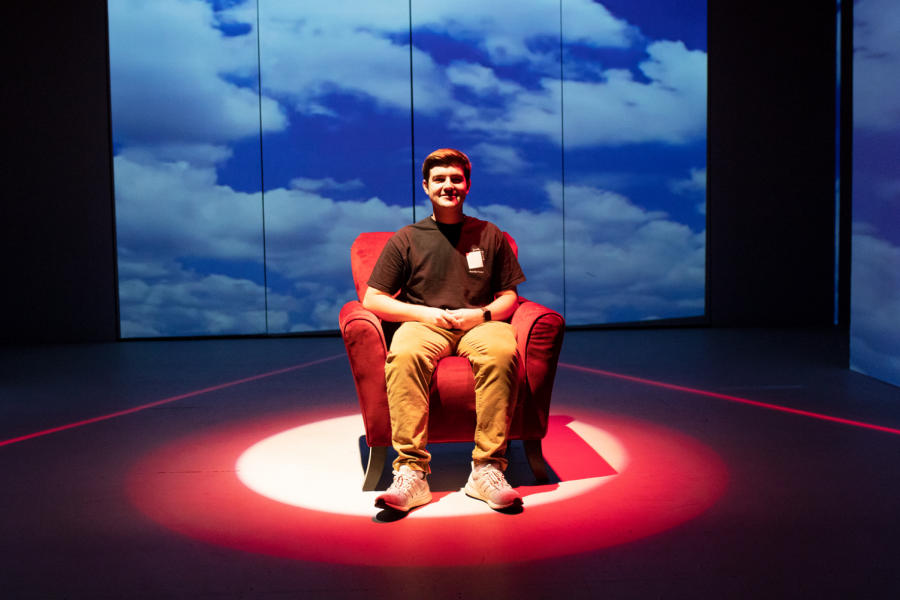 Vibrant colors flash on a pitch black stage as thunder booms in the background. While the music crescendos, the entire cast of the play gathers downstage, forming a line facing the audience.

The Black Box, Jesuit High School’s theater, is no stranger to absurd and unique stage designs. The theatre program has used almost everything from TV screens and projectors to an entire stage that rotates like a turntable. These innovations further enrich each show’s visual effects and entertainment appeal.

The idea of having actual rain on stage was especially ambitious, but it happened for the 2017 fall play, “Isaiah Says.” Thanks to the dedication and creativity of the play’s two stage managers, Josh Clark ’19 and Scott Tooley ’18, the unthinkable was made possible.

For Scott, the Black Box was something of a family affair. Following the lead of his older cousin, Director of Alumni Relations Mr. Kyle Tooley ’13, Scott joined the program during his freshman year for the production of, “An Encyclopedia of Early Earth” (based off of the graphic novel of the same name by Isabel Greenberg).

As a freshman, Scott stood out from the rest of the technicians. His understanding of sound design, as well as his ability to learn quickly, eventually elevated him into the role of sound designer for that same show.

“After just one show, [Scott] set the bar really high and made people understand that student roles and student leadership in tech were not only possible but something in which to aspire,” said Theater Director Mr. Ed Trafton ’84.

Not many professionals, let alone students, know how to manage sound design effectively. Despite Scott’s ability to make the process look easy, it actually is an incredibly difficult job. One outstanding example of Scott’s craftsmanship was witnessed in the 2016 fall play, “44 Plays for 44 Presidents.”

“44 Plays for 44 Presidents” took awhile to get all the sound and media done,” Scott said. “I believe it holds the record for most media/sound cues in a Jesuit production, with around 300 cues called and 1,500 internal cues working to make all the media and sound […] Finding the right sound effects can take awhile; I never quite know where to start; you have to get creative and look through multiple sound libraries to find the right sound. It’s not a particularly easy task to do.”

“44 Plays” was his fifth show and although later shows never became quite as difficult, Scott continued to go above and beyond for the Black Box, paving a way for other technicians to make their own impact on Jesuit Drama.

“His instincts, his intuition, and his theater savvy is something I don’t think a lot of people are really aware of or take that seriously sometimes,” Mr. Trafton said. “He has an incredible amount of depth, fantastic taste, a lot of theatrical instinct […] I think we can see his legacy with many other technicians and stage managers as well, who are all very able and willing to solve problems.”

Currently, Scott is studying business at St. Mary’s College, and even as an alumnus, Scott still continues to contribute to the Black Box, mentoring current sound designers and technicians to continue the Drama’s excellence for years to come.

But this is only part of the story…