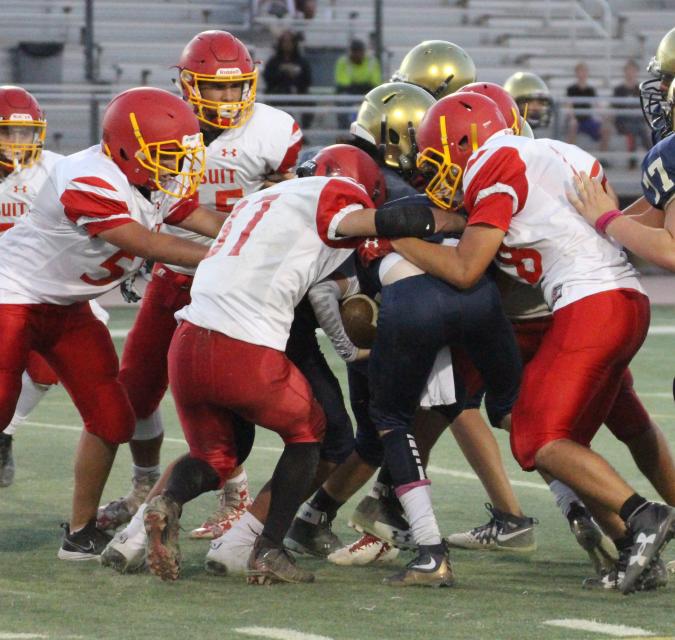 The Freshman Marauders improved their record 5-2 (an undefeated 3-0 in Delta League play) by beating the Elk Grove Thundering Herd 21-14.  The Marauders ran for 270 yards, and Chris Thorn threw for 43 yards in the win.

Jared Manuel took the opening kickoff to the Jesuit 32 yard line.  Two plays later, Thorn hit Carson Keim in a designed roll out 19 yard pass to the right. On the very next play, a fake handoff to Noah Clay fooled the entire stadium, and Thorn kept the ball himself, using a strong stiff arm to run 44 yards for the Marauder’s first touchdown.   Ryan Young kicked the extra point.  Jesuit was up 7-0.

Elk Grove’s first drive featured steady 7 and 8 yard runs.  The Thundering Herd marched up the field, until Carson Keim hit Elk Grove’s running back in the backfield for a three yard loss.  The Herd did manage to get a first down, and a 40 yard strike placed the ball at the Jesuit three yard line.  Elk Grove ran the ball in for a score, and the game was tied 7-7.

In the second quarter, Noah Clay ran steadily through Elk Grove defenders on a series of runs.  Then Thorn completed a 19 yard pass to his tight end Ty McGlynn.  However, Jesuit fumbled, and the Herd took over.  A strong hit by Noah Clay caused Elk Grove to fumble the ball right back.

Jesuit’s offense sputtered, and Elk Grove took over on downs at their own seven yard line.  Keleki Latu sacked the quarterback, and the Herd were in trouble deep in their own territory.  Elk Grove punted, and the half ended with a tie score of 7-7.

After a few runs up the middle, the Marauders used deception again to fake a dive, only to have Thorn run 35 yards for another touchdown.   Jesuit went up 14-7.

Yet Elk Grove was not giving up.  The Herd drove down the field on their next drive, with repeated long runs and a pass. However, at the Marauder 27 yard line, Declan Mitchell stepped in front of a Herd receiver to intercept the ball.

After a couple of strong runs by Chris Raboy, Cash Taylor scrambled for 27 yards for a Jesuit touchdown.  It was 21-7 with a few minutes left in the fourth quarter.

Elk Grove couldn’t seem to move the ball on their next drive, and they lined up in a punt formation.  In a gutsy call, the Herd faked the punt and threw for a 55 yard touchdown. 21-14 Jesuit with 7:52 left in the game.

The Marauders looked to milk the clock, but they fumbled after a couple of first downs.  In their next drive, the Herd were stopped on third down by a blitzing Cash Taylor who tripped up the quarterback in the backfield.  The Herd were forced to punt again.

Then Noah Clay ripped through a hole for a 60 yard gain to the Elk Grove 5 yard line.  Yet a holding call took another Marauder touchdown off the board, and Jesuit failed to kick a field goal.

With a little over two minutes to go, Elk Grove benefitted from a pass interference call that placed the ball on their own 35 yard line.  The Herd moved the ball, but Cash Taylor and Carson Keim sacks brought the Herd back into their own territory.  Declan Mitchell sealed the game with his second interception of the evening.  Final score:  Jesuit 21-Elk Grove 14.