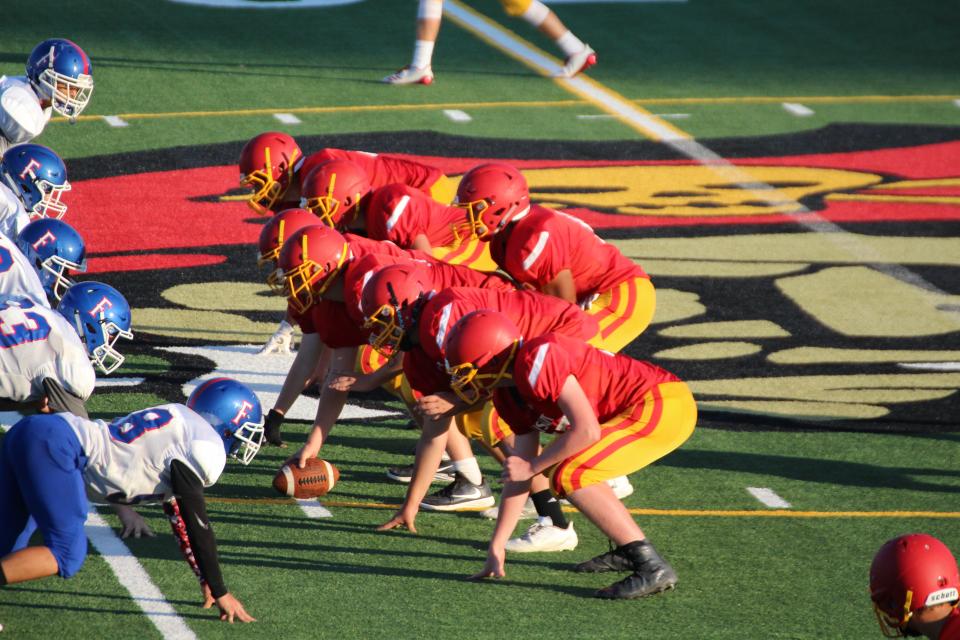 The Freshman Marauders (1-1) beat the Folsom Bulldogs 35-13 on a hot Thursday evening in their first home game.

Quarterback Chris Thorn got the scoring started on the third play of the game with a 50 yard run to the right.  He was freed up by a driving block from Connor Khosrovi and a deceptive fake handoff that fooled the Bulldog defense.  The extra point was blocked.  Jesuit was up 6-0.

The Folsom offense went nowhere on their first drive, with huge tackles from Noah Clay and James Econome.  Folsom’s punter bobbled the snap, and the Marauders had great field position for their second drive.  However, a fumble gave the ball right back to Folsom.  Both teams’ ensuing drives stalled and they traded punts. On the Jesuit side, Gage Johnson provided excellent coverage, preventing a thirty yard Bulldog reception.  At the end of the first quarter, the score remained 6-0.

The second quarter began with Cash Taylor’s driving tackle of Folsom’s running back behind the line of scrimmage.  Two plays later, Carson Keim sacked the quarterback.  Elijah Montevirgen blocked the punt on fourth down, and the Marauders had the ball on the Bulldog 30 yard line.

The Marauders scored for the second time with a pass from Thorn to a leaping to Gage Johnson.  Chris Thorn ran the ball into the end zone for a two point conversion, and the score was 14-0 Jesuit.

For the first time, the Folsom offense showed signs of life.  The Bulldogs scored off a 60 yard pass, and the score was 14-7 Jesuit.

On the ensuing kickoff, Jared Emanuel returned the ball 43 yards.  The Marauders drove steadily running the ball and with a beautiful pass from Thorn to Carson Keim, just before Thorn was about to be sacked.  On third and long, Thorn hit Keleki Latu with a lob that took the Marauders to the 5 yard line.  Thorn walked the ball behind his big center Nick Swanson to score the Marauders third touchdown.  Ryan Young kicked the extra point.  At the end of the first half, the score was 21-7.

To start the second half, Folsom proved they were not giving up and promptly passed the ball in a series of short passes down the field for a touchdown.  21-13 Jesuit.

On their first possession of the second half, Noah Clay ran over Bulldog defenders for a 20 yard gain.  But the drive stalled and the Marauders were forced to punt.  Folsom couldn’t move the ball either, and the Marauders completed a short drive, culminating in a pass from Thorn to Declan Mitchell.  It was 28-13 Jesuit at the end of the third quarter.

Folsom’s quarterback tried to the move the ball himself, with multiple sneaks that did not advance the ball far.  Jesuit took over on downs, and Thorn hit Roman Canaan for a 20 yard catch and run.  The Marauders ate up clock by testing the middle of the Bulldog defense, and Jesuit progressed slowly up the field.  The drive ended with Thorn’s keeper from the four yard line.  35-13 Jesuit with 2:43 left in the game.

The game finished for all practical purposes with an interception by Marauder defensive back Drake Bicknell.  Thorn took a knee, and Jesuit’s freshman had their first win.