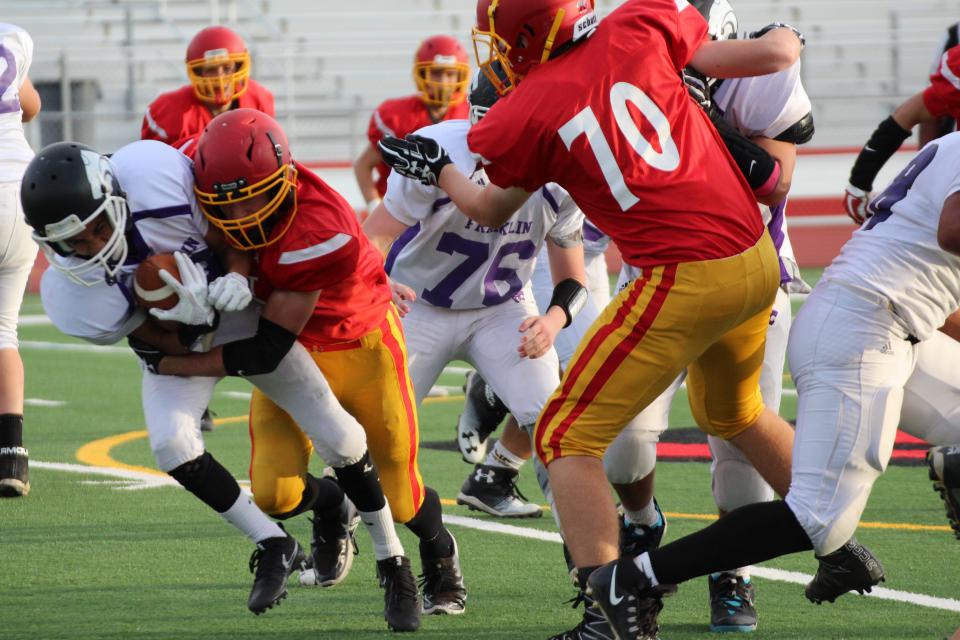 The Freshman Marauders beat the Franklin Wildcats 35-13 in their final home game of the 2017 season.  Jesuit’s record is now 6-2 (an undefeated 4-0 in league play).

Jesuit received the opening kickoff and quickly tested Franklin’s defense with the run.  Noah Clay found space inside and ripped off a 17 yard gain.  Four plays later, Cash Taylor ran virtually untouched off a great block from Devon Walczykowski for a 47 yard touchdown.  The extra point was no good.  6-0 Jesuit.

On the ensuing Ryan Young kickoff, Chris Raboy disrupted Franklin’s returner fielding a bouncing football, causing a Wildcat fumble.  Taylor Marks recovered the ball, setting up a Marauder first down from their own 28 yard line.  However, Big Red could not move the ball and turned the ball over on downs.

On Franklin’s first offensive drive, Keleki Latu pressured the quarterback on an outside blitz, forcing an errant Wildcat pass.  Franklin was forced to punt, but Jesuit failed to move the chains as well and punted the ball right back.

To start the second quarter, Keleki Latu both blocked a Wildcat punt and recovered the ball, setting the table for a Jesuit first down on the Franklin 16 yard line.  A few plays later, Chris Thorn threw to Jacob Peluso in the corner of the end zone.  Thorn ran a keeper for the two point conversion.  14-0 Jesuit.

Franklin moved the chains for a few first downs, but they ran of downs near the Jesuit 26 yard line.  Thorn threw a delayed short pass to Taylor Marks, and Cash Taylor finished the drive with his second touchdown of the day on a thirty yard run.  Ryan Young’s extra point was good.  21-0 Jesuit at the end of the half.

The second half began with a great special teams tackle pinning the Wildcats on their own ten yard line.  Hunter Hastings made a brilliant open field tackle, stopping a Wildcat receiver in the backfield, and Ryland Dewar broke up a Franklin downfield pass.  Franklin was forced to punt yet again.

The Marauders tried to use up clock but failed to move the ball.  After their punt, Franklin was looking to pass in order to stay in the game.  The Wildcat’s QB completed a few passes to move the ball.  However, he also threw an interception to Declan Mitchell, who ran for a pick six.  The extra point was good.  28-0 Jesuit.

Franklin drove the ball well on the next drive, completing passes and churning up running yards.  The Wildcats completed a long pass for their first touchdown, but Declan Mitchell broke up the failed two point conversion.  The score was 28-6 Jesuit.

The third quarter ended with Thorn moving the ball with his arm.  He completed a 20 yard pass over the head of the Wildcat defender to Gage Johnson.  It worked so well, the Marauders ran the same play and scored a touchdown.  35-6 Jesuit.

Franklin answered back by moving the chains and limiting the clock running, but Gage Johnson intercepted the ball at the Jesuit one yard line.  Chris Thorn ran a few keepers to get the Marauders out of danger, but Jesuit punted the ball.

In the waning minutes, Franklin scored again, but it was too little, too late.  Final score:  Jesuit 35 to Franklin 13.