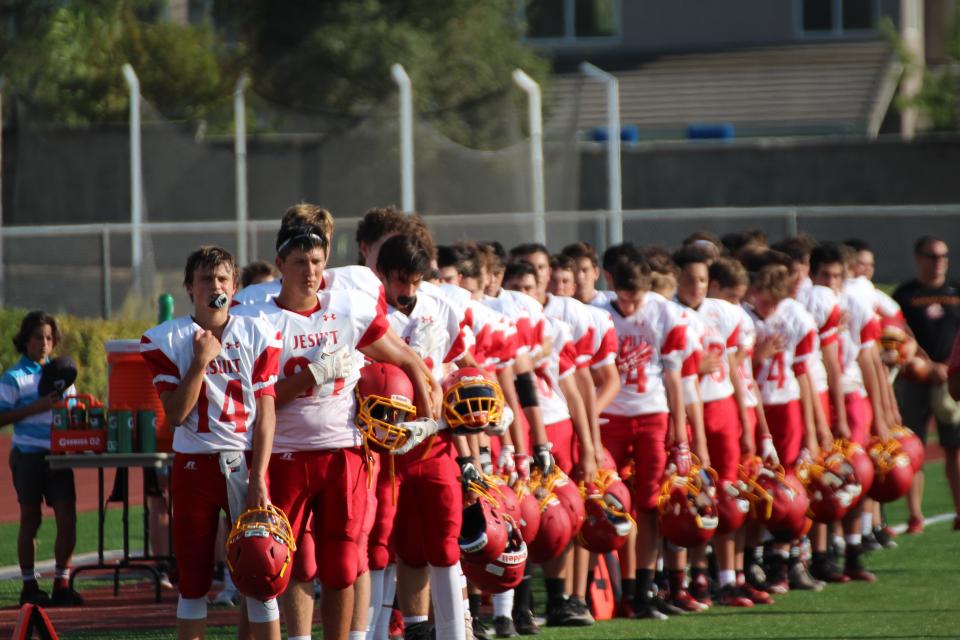 The Freshman Marauders began their season with a close, thrilling loss that came down to the final minutes on a blazing hot night against their non-league opponents:  the Granite Bay Grizzlies.

The first half of the game belonged to the Grizzlies.  After Gage Johnson returned the opening kickoff to the 24 yard line, the Marauders failed to make a first down on their first three plays from scrimmage.  Granite Bay scored on their opening drive with a 23 yard pass.  Jesuit was forced to punt on their second set of downs, and Granite Bay scored a touchdown off the ensuing punt return.  After passing for a two point conversion, the score was 14-0 GB.  The Marauders began the second quarter with another punt, and the big-play Grizzlies ended their next drive with a 39 yard touchdown pass.  Things looked glum with the score 21-0 GB.

Then, all of a sudden, there were signs of life for the Marauders.  Gage Johnson returned the kickoff 34 yards, with help from a monster block from Jared Manuel.  After a 15 yard penalty against GB, Quarterback Chris Thorn ran a keeper for another 15 yards.  The drive sputtered in penalties, but Jesuit was starting to awaken.  The Marauder defense tightened up as well, with Carson Keim overpowering the GB unbalanced, offensive line to stop the Grizzlies from continuing their drive on fourth and three.  At the end of the half, the score remained 21-0 GB.

The second half began with Declan Mitchell recovering a GB fumble, giving the Marauders the ball at the GB 15 yard line.  Cash Taylor scored the Marauders’ first touchdown of the season, off a beautiful delayed pitch from Thorn.   The score was 21-7 GB, and the Marauders were starting to get some swagger back.

Granite Bay went nowhere on the next drive.  Carson Keim and Keleki Latu stopped all GB runs, and the Grizzlies were forced to punt.  Cash Taylor and Chris Thorn alternated long runs behind solid blocking from a strong offensive line push from Nick Swanson, Ty McGlinn, Nick Bayard, Devon Walczykowski, Connor Khosrovi, and others.   The scoring drive ended with Chris Raboy running the ball in to the end zone, after a last second pitch from Thorn.  Jesuit failed to convert the extra point.  Score:  21-13 GB.

The fourth quarter began with the Grizzlies stalling out against a fired up Marauder defense, and GB was forced to punt.  A solid block from Taylor Marks freed up a 12 yard run for Elijah Montevirgen, and the Marauders looked like they were moving again.  However, a Marauder fumble gave the Grizzlies back the ball.

The defense was not giving up.  A thundering sack from Sebastian Torres forced a GB punt, but the Marauder offense punted it back.  GB scored on a 45 yard drive, making the score 28-13 GB.  On the ensuing drive, Chris Thorn began to make consistent, smooth passes to Taylor Marks and Gage Johnson that moved the chains.  His final pass of the drive was the most impressive:  a fade to Taylor Marks in the end zone that was one of the top highlights of the night.  28-20 GB.

With about a minute left, the Marauders needed a perfect onside kick.  Ryan Young chopped up a beauty, and the Marauders recovered a GB fumble.  The Jesuit sideline and stands erupted in celebration.  After a few plays from scrimmage that did not yield many yards, Gage Johnson came in for the final play of the game at quarterback.  As he was falling on his back getting sacked, Johnson threw a high ball that Taylor Marks sprang and caught.  Marks sprinted toward the end zone but was caught 20 yards short by the GB defense.  It was a thrilling finish to a memorable game.