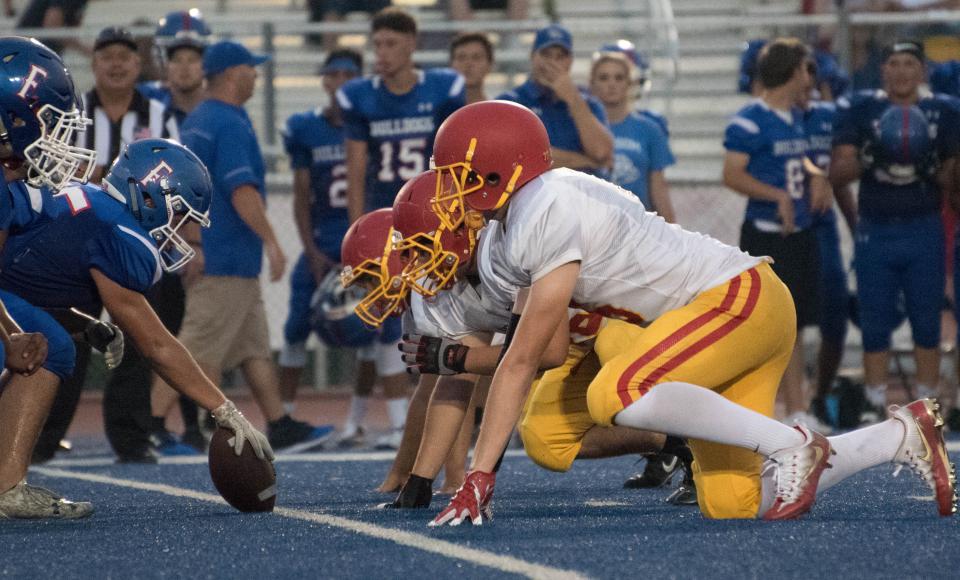 This week’s game was moved to Folsom from Jesuit to accommodate a later start under the lights and hopefully lower temperatures. The shift in location and start time did not help the Marauders as game time temps were still above 100 degrees. Jesuit put themselves in a hole early fumbling the opening kick-off giving the Bulldogs great field position at the Jesuit 12 yard line.  Two plays later Folsom cashed in turnover, Folsom 7 – Jesuit 0 with less than one minute played in the game. On their next possession Jesuit put together a solid eight play drive eventually having to punt the ball back to Folsom.  The host Bulldog’s quick strike offense converted quickly on the third play of their second drive for a 23 yard touchdown pass and after a missed PAT the score was Folsom 13 – Jesuit 0 midway through first quarter. The Big Red defense started to flex its muscle and combined a big pass deflection from Matthew Marsh and several solid tackles by Hunter Donelson, Soren Peterson, and Nick Blake to show down the Bulldogs. After the early mishaps and slow start Jesuit regrouped and showed their toughness putting together their longest drive of the season.  Working their way down the field they controlled the ball via a methodical 17 play drive through the remainder of the first quarter and well into the second stanza.  The drive was kept alive with a long passes from Daniel Susac to Jacob Hall (23 yard gain), and Parker Breen (28 yard gain).  The drive was punctuated by a beautiful back-shoulder touchdown throw by Susac to Cooper Shults for 12 yards and the first Bog Red score of the day.  After the successful PAT the score was Folsom 13 – Jesuit 7.  Jesuit’s D again stepped up on the first play of Folsom’s next drive by forcing a fumble recovered by Jared Hight. Jesuit put together a quick scoring drive of their own and four plays later Susac hooked up with Shults again for a 34 yard rainbow pitch and catch down the sideline to give Jesuit 1st and Goal at the one yard line.  Ace Saca powered it in for the one yard score and after the PAT by Gabe Neumann Jesuit had it first lead of the season 14 – 13 with 7:27 left until half.  The momentum shifted back to Folsom for the rest of the first half as Jesuit was forced to punt on their last three possessions of the half and Folsom converted on scoring drives on all three of their remaining first half drives to make the score going into halftime Folsom 34 – Jesuit 14.

Folsom picked up where they left off by taking the opening kick-off and returning it 70 yards to the Jesuit one yard line.  They converted the touchdown pushing the score Folsom 41 – Jesuit 14.  Once again Jesuit kept fighting despite the adversity.  The Jesuit offense moved the ball down the field behind more pinpoint passing from Susac.  He hit Cooper Shults for a 23 yard gain and finished the drive with a 27 yard bullet to Jacob Hall for a touchdown.  After the PAT the score was Folsom 41 – Jesuit 21.  The Big Red D again showed its toughness with several big stops slowing down the Bulldog offensive machine. After trading punts with Folsom on the next two possessions, Folsom put together their final offensive scoring drive that ended with a seven yard touchdown run.  At the end of the third quarter the score was Folsom 47 – Jesuit 21.

There is just no quit with the Jesuit Marauders.  Jesuit’s offense took the ball on the next possession and moved it down the field with their passing game.  Susac hooked up with Ace Saca (3 yards), Tyler Sloan (16 yards), Zach Bagley (20 yards) and finished it off with a touchdown pass to Nick Blake for 23 yards.  After another successful PAT by Gabe Neumann (5 for 5 on the day) the score with 9 minutes left in the game Folsom 47 – Jesuit 28.  Folsom tried to answer back on their next possession; however a beautifully defended pass break-up by Jacob Hall resulted in a one handed interception by Nick Blake to give possession back to the Marauders. This time it took Daniel Susac just two plays before he hooked up with Jacob Hall on a 64 yard touchdown catch and run.  After the PAT the score was Folsom 47 – Jesuit 35 with 4:25 left in the game and the Big Red machine was gearing up for a big Rally. The Jesuit defense was able shut down the Bulldogs final drive to force a turnover on downs and get the ball back. The Marauders were knocking on the door again driving to the Folsom 11 yard line before an unfortunate interception and return for a touchdown ended the game.  Final score Folsom 54 – Jesuit 35. Despite the outcome the Marauders illustrated they are resilient and never give up. The home town fans were growing nervous in the waning moments until the untimely last second pick six.