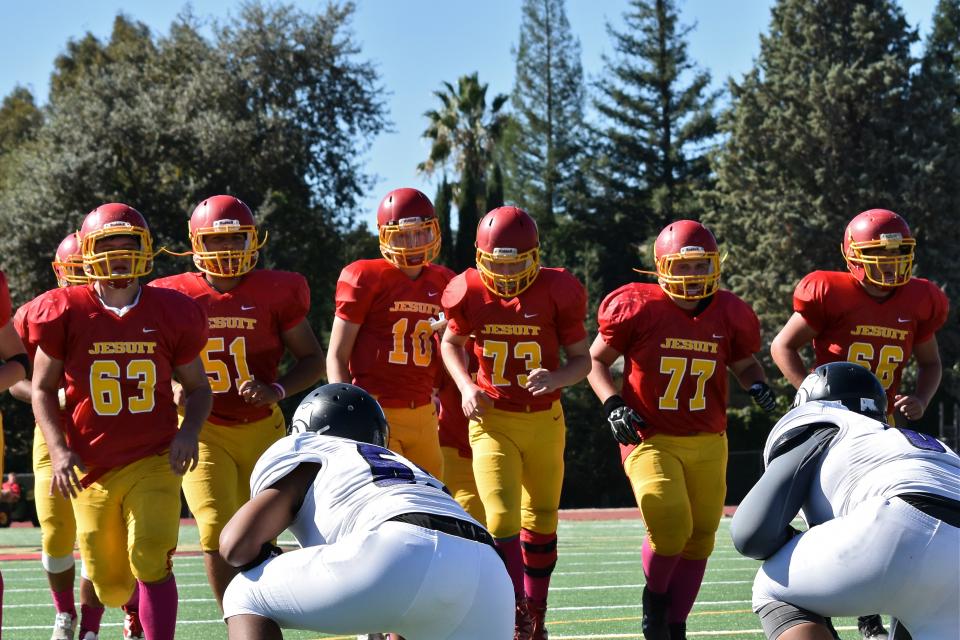 It was a beautiful fall Saturday morning for the Marauders last home game of the year as Jesuit took on a tough Franklin High School team in a critical Delta League contest. The Marauders early game miscues continued on this morning start time game. Following the opening kick-off Jesuit established the running game immediately.  Kiran Reddy broke off a 17 yard run on the first play of the game. Daniel Susac turned a potential sack into a big play when he scrambled for 13 more yards on the third play of the drive. Reddy went back to work and hit for another 18 yards. Unfortunately the turnover bug bit again and the Marauders fumbled the ball to stall an impressive opening drive. The scouting report on Franklin was they loved to run the ball behind their big offensive line and get their athletic running backs to the edge.  The first offensive play proved this accurate as a speedy Franklin running back  hit the edge with a sweep and raced for a 71 yard TD. After a missed PAT Franklin had the initial lead 6- 0 with 8:12 left in the first quarter. This would be the only lead in the game for the Wildcats.

On the ensuing kickoff Jagger Saca provided a solid return of 13 yards. Unfortunately Saca was injured on the play and was done for the day. Saca had made a valiant effort to come back from an early season injury with a solid performance last week. Losing him early in the game could have been a blow to the Big Red machine. However, the offense showed their resiliency and depth and answered Franklin’s first drive with a powerful running attack of their own. Again it was Reddy starting the drive with a strong 10 yard run.  Jacob Hall stepped up with a deep pass reception from Susac down the seam for 61 yards giving Jesuit a first and goal. After the Franklin Defense held firm on the first two plays, Susac hit Cooper Shults on a quick out route in the end zone. Shults shrugged off a vicious hit and held on to the ball for the TD. Gabe Neumann’s seemingly automatic PAT was good and Jesuit took the lead 7 – 6 with 6:38 left in the first quarter. The Red Brick Wall defense couldn’t wait to get back on the field to shut down the Wildcats. Hunter Donelson continues to lead the stout defensive unit and racked up a pile of tackles early in the game. Tino Foondos solidified the interior line making several key stops including a big tackle for loss (TFL) of minus 5 yards. Following a short drive Franklin was forced to punt. The Big Red offense quickly  took off with Susac hitting multiple receivers with precision passes (Nick Blake for 10 yards and Logan Marks for 10 yards). However, the drive was cut short and Jesuit was forced to punt where the Wildcats put together their longest drive of the game of 14 plays. The Jesuit defense stepped up and set the tone for the rest of the game. They made appropriate adjustments and began to seal the edge and stifle the quick footed running backs from Franklin. Donelson continued to rack up tackles with several teammates joining in the fun. Nick Blake, Reddy, Soren Peterson, and Logan Carter caused havoc the rest of the half for the Franklin offense. The Wildcats made an ill-advised choice to go for it on fourth and five in the red zone and the Red Brick Wall slammed the gate thanks to a big hit from Tyler Sloan. The rest of the half remained a struggle for both teams offenses and at intermission the score  remained Jesuit 7 – Franklin 6.

Franklin received the ball to start the second half and put together a solid drive. Their success was short lived as the sure tackling of the Big Red D kept Franklin out of the end zone. The 11 play opening drive was abruptly ended with a sack by Donelson. Following the Wildcat punt Jesuit’s first possession of the second half proved to be the difference in the game. A punishing 12 play drive punctuated by Reddy runs of 15, 6 and 11 yards. Susac hit Hall (16 yards), Shults (19 yards), and Marks (10 yards) to move the sticks. Mauricio Murguia-Sarin came into the game replacing the injured Saca and let everyone know there would be no fall off as he pounded the rock for 23 yards. The drive was capped by Reddy’s 1 yard touchdown run by Reddy. Another straight down the middle PAT by Neumann and the Jesuit lead was 14 – 6 with 2:00 minutes left in the 3rd quarter.  On Franklin’s next possession a backfield miscue combined with an aggressive front seven spelled trouble  as the Jesuit defense pounced on a fumble with Reddy recovering and giving the ball back to the Marauder offense.

Jesuit takes pride in maintaining conditioning throughout the season. The rest of the game proved the value of being in better shape than your opponents as the Big Red offense continued to wear Franklin down by pounding the ground game. After punishing Franklin with tough runs by Reddy and Murguia-Sarin, Susac hit Tyler Sloan for a 26 yard touchdown. Another good PAT by Neumann and  Jesuit extended their lead 21 – 6 with 8:38 left in the game. Franklin’s offense became desperate as their line became clearly exhausted could not establish any more offensive momentum. The Wildcats were forced to watch the fourth quarter clock tick and the Red Brick Wall shut them down again and again. More solid defensive plays from Donelson (who passed 60 tackles for the season) Foondos, Peterson, Hall, and Matthew Marsh continued to show the visiting Wildcats they were in for a long day. Zack Bagley provided several big plays from his Defensive End position with a big pass deflection and constant pressure on the Franklin QB as they were forced to throw the ball. Franklin ended their next drive while going for it on fourth and two; the Red Brick Wall shut them down again to turn it over on downs. The next Jesuit drive was unable to generate a first down and Blake was called on to punt. A high spiraling kick sailed towards the Franklin sideline where the ball hit a Franklin player. Cooper Shults provided great coverage and was there to grab the ball and the Jesuit O was back in business deep in Franklin territory. Murguia-Sarin immediately broke loose for a 36 yard gain setting up first and goal from the seven yard line.  Reddy finished the scoring for the afternoon and punched it in for the touchdown.  Neumann’s automatic PAT made the score  Jesuit 28 – Franklin 6 with 4:51 left in the game. Franklin again abandoned their running game and went to the air and again the defense was up to the challenge. A big sack by Soren Peterson (-7 yds) led to another turn over on downs. The Jesuit O was able to run out the clock and finish the game with a well-deserved victory formation to seal the win.