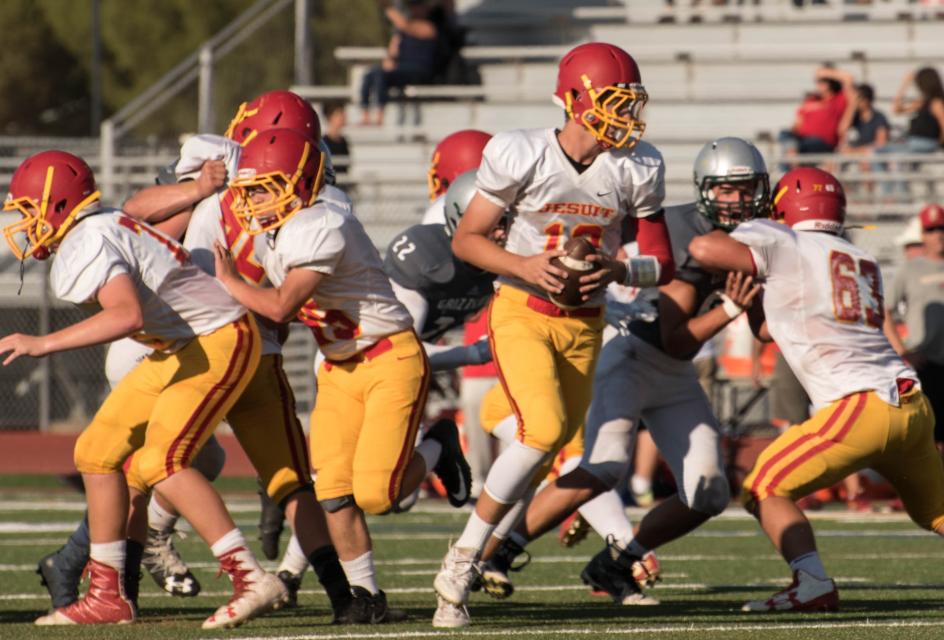 In what is certain to be the first of several extreme heat contests to start the season, the JV Marauders lost a heartbreaker in Granite Bay against a Grizzlies team motivated for redemption. Looking to avenge last year’s defeat the Grizzlies played an inspired contest in the scorching late afternoon heat on Friday night. In the end the Marauders lost a heartbreaker in which miscues and stellar Big Red Defense tell the entire story. The defensive struggle was hindered by unfortunate turnovers by the Marauders all night. The big red offense ended six drives with turnovers (four interceptions and two fumbles).  Jesuit started the first half with four consecutive drives ending with a turnover. All told the first half  Marauder offense had six possessions five of which ended in a turnover.

That is only half of the story. Given that unprecedented number of mistakes on offense you would expect the Marauders to be losing by double digits at halftime.  Not so, the Red Brick Wall defense was up to the task all night.  Despite being put in difficult field positions the entire first half the Big Red defense was impenetrable pitching a shutout in the first half.  The defense was highlighted by big plays by Hunter Donelson, Kiran Reddy, and Soren Peterson who all played stellar at Linebacker all night making numerous big time stops. Donelson who co-led the team in tackles had a big first half sack to kill a Granite Bay drive. Nick Blake and Soren Peterson made big contributions to stall Grizzly drives as well. Blake also had a key pass deflection to kill a Granite Bay drive. Peterson along with Tino Foodos provided some big hits on Granite bay runners, while Reddy made several big stops along with several teammates to hold the hosts from the northeast to only one score on the night.

The Marauders came out after halftime ready to redeem themselves tied 0-0.  The Grizzles took the ball on the opening drive of the second half and capitalized on their only big play of the game hitting on a 55 yard scoring pass for their lone TD of the game.  The PAT was successful and the Grizzlies lead 7-0. The Marauders took the ball for the first time on O after the Grizzly touchdown and looked to have renewed determination.  The offense put together their longest drive of the night moving from their own 36 yard line to the Grizzly 19 over 11 plays before the turnover bug bit them again killing the drive with an interception. The defense stepped up again after the turnover and forced a  quick three and out.

The offense finally broke through on their next drive.  Highlighted by a 34 yard pass and catch from Susac to Shults the Marauders finished a drive with a two yard touchdown run by Kiran Reddy.  After the touchdown the Marauder O lined up for a two point conversion to try to take the lead via a heavy set power run only to be stopped just short of the goal line. The third quarter ended with the Marauders down 6-7.

Unfortunately for the Marauders that score was how the contest ended. The fourth quarter continued the theme of defensive dominance for both teams as the teams traded possession without much success. The Big Red machine mounted one last valiant drive which came up short with a turnover on downs late in the game to seal the outcome. The overall effort, especially on defense was impressive. With a game which could easily have been 21-0 early finished with a statement the Marauder defense is for real and opponents will earn any score they get moving forward.

The defense was stingy all night.  Even with this long scoring pass the Marauder defense held the Grizzly passing attached to 46% completion with a total of 90 yards.  The defense also held the Grizzly rushing attack to 2.5 yards per rush on 33 attempts.