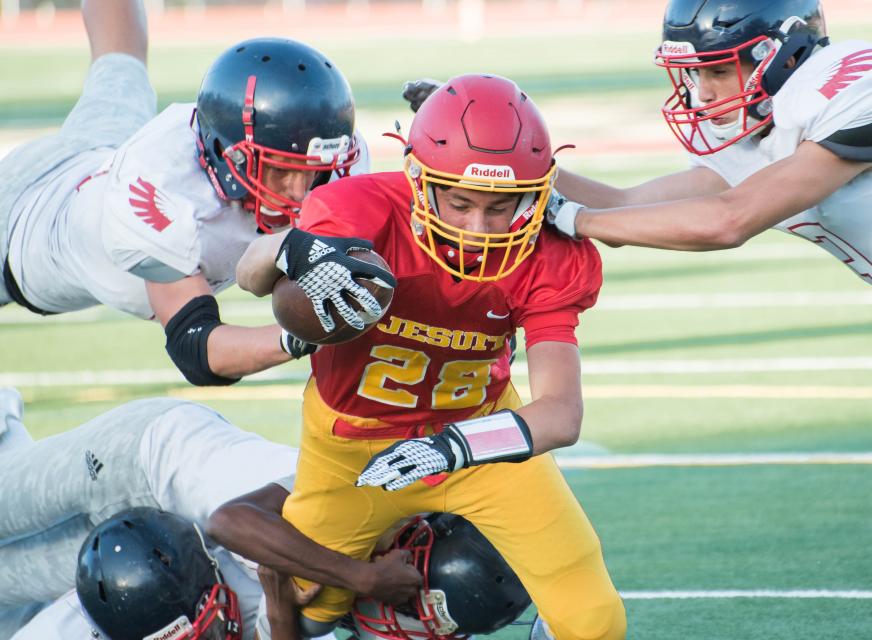 Fall is officially in the air as game time temperatures for this week’s contest were finally cool and comfortable. Not so much for the visiting Pleasant Grove Eagles who arrived at Jesuit for the team league play opener. The Big Red JV Machine continued their strong play and stingy defense as they dominated the Eagles on a pleasant yet rare Thursday evening contest at Hanson McClain Stadium.  After a short return of the opening kick Pleasant Grove started their initial drive on their own 23 yard line.  The Red Brick Wall defense set the tone early. Big hits by Soren Peterson and the rest of the swarming defense resulted in tackles for loss on the first two plays. The Marauders first offensive possession resulted in a three and out and once again the Jesuit Defense stepped up and shut down the Eagles offense forcing another punt back to Jesuit. Fans were excited to see Newtan Quinlan lining up to return the punt for his first game action of the year after an injury in fall camp.  The Marauder offense took over at PG 48 yard line and started rolling.  Jesuit established the run with solid gains by Ace Saca and Kiran Reddy. Daniel Susac hooked up with Jacob Hall down the sideline for a 26 yard completion and Kiran Reddy finished the drive with a very well blocked power run plan for a 12 yard score.  After the successful PAT by Gabe Neuman the score was Jesuit 7 – PG 0 midway through the quarter. Following a deep kick off the visiting Eagles took over and put together their longest drive of the game. They weren’t able to cash in however as the defense stiffened when PG crossed the 50 and were again forced a punt. Jesuit took over at their 20 yard line and went back to work with the rushing attack only to have the drive stall after six plays with a punt back to PG in the early second quarter. Any concern about a momentum shift were quickly put aside by the dominant Big Red defense.  After a completion and first down by PG Jesuit stiffened and a big backfield hit and tackle for loss by noseguard Josh Wilcox. The play was followed by the cousin  tandem sack by Soren Peterson and Cooper Shults leading to another PG punt.  Newtan Quinlan returned the punt for 22 yards to give the offense great field position.  Susac hit Jacob Hall again for 13 yards on the first play of the drive and then threw a strike to Tyler Sloan down the sideline on the next play for a 54 yard touchdown.  After the successful Neuman PAT the score was Jesuit 14 – PG 0 with 3:33 left until half.  The final three minutes of the half PG and Jesuit traded possessions, including trading interceptions with the Jesuit takeaway by Nick Blake to end the half, Jesuit 14 – PG 0.

The second half was more of the same; dominating defense and dominating O-Line play to provide huge holes to run through for the stable of Jesuit running backs.  On the first possession of the second half big chunks of yardage were gained on the ground by Ace Saca and Newtan Quinlan.  Jacob Hall caught a 26 yard pass from Daniel Susac and Quinlan finished the drive with a 25 yard touchdown run.  After the successful PAT by Neumann the score was Jesuit 21 – PG 0 with 7:22 left in the third quarter.  On PG’s first possession of the third quarter Jesuit forced a fumble, which was recovered by Zach Bagley.  Jesuit went right back to work. After eating up yards with short runs, Susac hit Cooper Shults on a post pattern for a 22 yard gain to give Jesuit first and goal at the six yard line.  Ace Saca took the hand-off on the next play and punched it in for a touchdown. Another straight down the middle Neuman PAT and the score was Jesuit 28 – PG 0 with 2:56 left in the third quarter.  PG took the ball on their next possession and threatened to score for the first time all game.  After a 26 yard completion to set-up first and ten at the Jesuit 19 yard line the Red Brick Wall stiffened again.  Josh Drinen made an acrobatic interception to get the ball back. The offense took over with a nice pitch and catch from Susac to Nick Blake for 8 yards.  Jesuit fans excitement to see Newtan Quinlan return from injury was rewarded watching Quinlan take a handoff, get to the edge of the defense, and speed past all defenders 72 yards to the end zone.  Neumann completed his perfect day on PAT kicks and the score was Jesuit 35 – PG 0.  The Big Red defense continued to dominate the Eagles with big sacks by Tino Foondos and Kiren Reddy. Hunter Donelson continued to lead the team in tackles with another strong performance. The end of the game was punctuated by some excellent runs by Mauricio Murguia-Sarin and Kabir Shaikh. The later to the enthusiastic delight of his teammates.  Ace Saca ended the game with a breakaway run for 51 yards where he exhibited excellent sportsmanship by stepping out of bounds at the one yard line. A final kneel down to run the clock out shows the true Jesuit spirit of playing hard and winning respectfully.

Jesuit moves on to a rivalry league game at home next Saturday vs. Davis at 11AM.