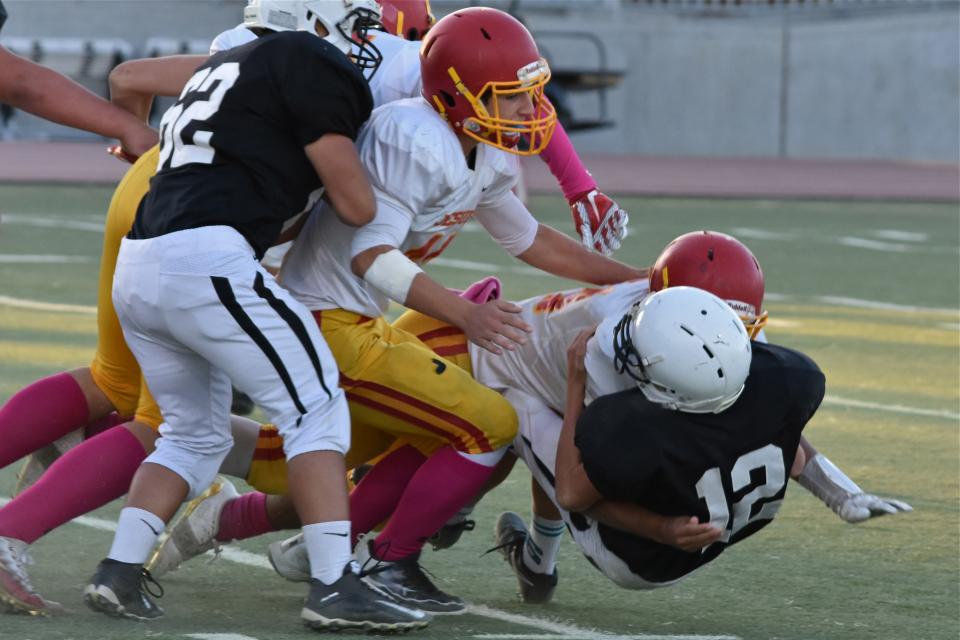 Another beautiful fall evening for football had the Jesuit JV Marauders making the short trip south to take on the Sheldon Huskies. The Big Red Jesuit faithful had plenty to cheer about.  This game was dominated from the start by Jesuit and Sheldon had no response for the fired up Marauders. Again the defense was the story as the Red Brick Wall pitched another shutout and held Sheldon to just two first downs all game.  Sheldon possessed the ball for a total of 12 plays in the first half with zero first downs and 16 plays in the second half with two first downs.  The defense also intercepted the Huskies three times (two in the first half and one in the second half) for one of their most dominating defensive exhibitions of the season.

Jesuit started the game with the ball after an opening pooch kick and on the second play of the opening drive encountered their only adversity of the day. Daniel Susac’s lob pass to Cooper Shults over the middle was picked off when a Sheldon defender made an acrobatic interception to set Sheldon up in Jesuit territory. The early game turnover bug wasn’t going to hinder the Marauders. The Jesuit defense set the tone for the evening on Sheldon’s first offensive play when Kiren Reddy made a statement with a big hit and a four yard loss. The next play from scrimmage Jacob Hall picked off a pass to give the ball right back to the Big Red offense. Starting at their own seven yard line, Jesuit went back to work and methodically moved the ball down the field. Susac hit Tyler Sloan for a 15 yard gain to get the drive moving and then the offensive line (Tino Foondos, Matthew Collier, Colin Seymour, Jacob Stone, Liam McLoughlin) gave the Huskies a taste of what the night was going to be like blasting big holes in the defense to set-up strong runs by Kiran Reddy and Jagger Saca moving the ball to the Sheldon 41 yard line. The next play Susac hit Tyler Sloan again this time for a 41 yard touchdown strike. After the successful PAT by Gabe Neuman it was Jesuit 7- Sheldon 0. Sheldon’s next drive starting on their 35 yard line was simply three plays of futility as the Big Red defense led by hard tackles by Soren Peterson and Tino Foondos forced Sheldon to punt the ball back to the Marauders. Starting on their 46 yard line, Jesuit continued their balanced attack. Powerful runs by Kiran Reddy moved the team down the field while Susac did his part completing passes to Jagger Saca (2 yards), Jacob Hall (22 yards) and Logan Marks (10 yards) to set-up first and goal when the first quarter ended. On the first play of the second quarter Jagger Saca punched it in from one yard out and with another good PAT by Neuman Jesuit increased their lead to 14- 0 with 9:57 left in the half. Sheldon started their next possession on their own 31 and on their first play Grant Flesher picked off an errant pass and put the ball back in the hands of the Jesuit offense. After their next drive stalled at the Huskie 25  yard line, Jesuit lined up for a 32 yard field goal. Gabe Neuman hammered it straight through the uprights with plenty of distance to spare increasing the Jesuit lead to 17- 0 with 5:57 left in the half. Sheldon’s next possession started on their 35 and quickly went backwards after two tough tackles for losses by Perry Jackson and Soren Peterson which forced another Sheldon punt back to Jesuit with 4:00 left in the half.  Jesuit went right to work Susac carved the Huskies up behind the stout Marauder offensive line.  Pinpoint passes to Hall (20 yards), Sloan (14 yards) and then finished the drive with a pass to Jagger Saca for a 29 yard touchdown. Another g0ood PAT by Neuman and Jesuit went to the Half with a 24- 0 lead.

The second half proved to be more of the same. After receiving the kick-off  Sheldon started their opening drive at the 22 yard line. The Big Red defense held Sheldon to another three and out forcing another punt. The Jesuit Offense executed their fastest drive of the night. One play for a 50 yard passing touchdown from Susac to Hall. Another PAT by Neuman and the rout was on; Jesuit 31- Sheldon 0. Sheldon started their next drive at the 25 and managed to get their first – first down of the game; however, their success was short and were quickly turned over on downs by the stout Marauder Defense. Jesuit took over on the Sheldon 48 yard line. After some  tough runs by Mauricio Murguia-Sarin and Ace Saca, along with a 15 yard pass reception by Cooper Shults the drive was stalled in the red zone at the 10 yard line. Neuman was called upon to attempt another field goal and he nailed it right down the middle from 27 yards out making the score Jesuit 34 – Sheldon 0 with 16 seconds left in the 3rd quarter. Starting the fourth quarter with the ball on their own 20 yard line Sheldon managed to gain their second and last first down of the game before being turned over on downs again by the Red Brick Wall. More solid tackles by Matthew Marsh, Nick Blake, Hunter Donelson, and Josh Drinen shut the door on any hopes Sheldon had of scoring. Jesuit took over on the Sheldon 32 yard line and after five plays were stopped on the 30 yard line. Never wanting to punt, The Jesuit coaches called on back up kicker Susac who lined up the boot and inched it over the uprights for a 37 yard field goal pushing the Jesuit lead to 37 - 0 with 2:32 left in the game.  Sheldon took the ball for what would be the last possession of the game. With just seconds remaining, The Huskies attempted a long pass over the middle. The Big Red D shut them down again. This time defensive back Nick Blake stepped in front of a Sheldon pass and made an impressive one handed interception. His athleticism took over and Blake made a twisting, turning,  run to the end zone for a big defensive touchdown to end the game.  Final Score Jesuit 43, Sheldon 0.

On Saturday, October 21st the Jesuit JV team will kick-off their last home game of the season vs. Delta League foe Franklin. Game Time is 11 AM and Hansen McClain Stadium.