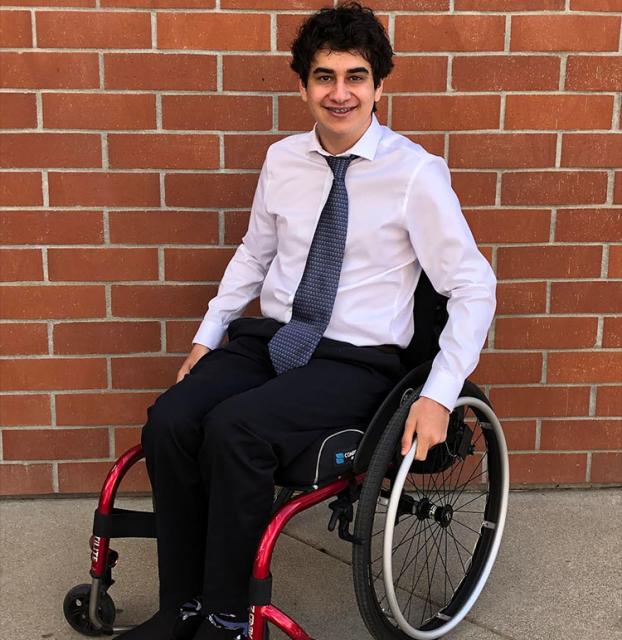 On Oct. 6, 2020, Jesuit High School Sacramento student Bassem Mansour ’23 was riding his bike when he was hit by a truck and dragged 50-feet. After the accident, he had to be airlifted to the hospital due to severe blood loss.

After his condition was stabilized and doctors attended to his injuries, he was bed bound for weeks. He was also unable to move anything below his chest for five weeks. Ever since then, he has made a determined recovery.

“My recovery so far has been pretty good,” Bassem said, “So far, some milestones I have made are the ability to dress myself, I can walk with a walker, and I can also take solo steps in my pool.”

Bassem has made massive strides, yet he still recognizes that he has a long road to full recovery.

Bassem has still been making the most of life and his high school experience during his recovery. According to Band Teacher Mr. John Cargile, Bassem inspires others around him with his love of playing drums in the band.

“So, I bet you this is going to be the same for when everyone tells you this, but his energy and enthusiasm; he is just so excited to be here and to do things,” Mr. Cargile said. “For me, in particular, he loves band, so every opportunity he gets to play, like I have to kick him out when I want to get lunch or coffee and he will just get sad. His energy and enthusiasm is the biggest thing he gives to the class.”

World Language Teacher Ms. Leslie Willson, who knows Bassem by his nickname “Bass,” constantly notices how he inspires and helps those in the Jesuit community.

“He has always brought enthusiasm, optimism, kindness, and generosity,” Ms. Willson said. “I think Bass has displayed even more optimism because he has missed most of the last year and attended on zoom for a long time; we all really missed him. I know he has been through a lot which has made him more mature because he had to undergo so many difficult moments. He is a hard worker.”

Bassem has undergone much struggle, yet he remains one of the most enthusiastic and courageous members of the Jesuit community. He serves as a remarkable model of determination and of what it takes to be a “Man for Others.”

Since our interview, Bassem with the help of his family established a fund at UC Davis to support pediatric trauma. You can learn more and donate here.