Despite an inconsistent season, Jesuit basketball looks hopefully towards the future 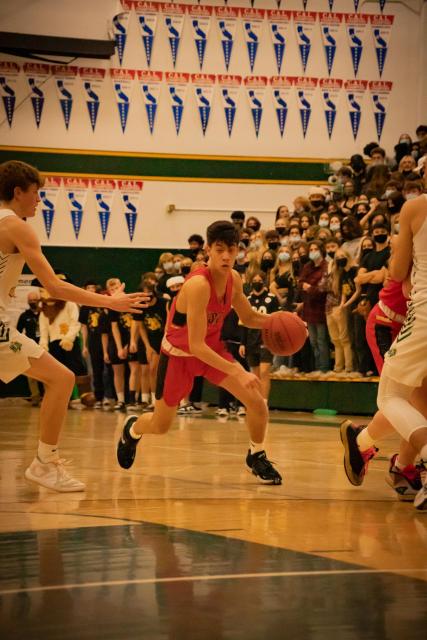 On Friday Feb. 18, 2022, the Jesuit High School Sacramento varsity basketball team had their first game of the CIF D2 Sac-Joaquin Section playoffs against Vacaville High School, which they won 64-52. They then played Elk Grove High School losing 60-51, and thus, ending their season.

Their first game was at home against the Vacaville Bulldogs, a team that Jesuit had already faced in the Father Barry Classic when the Marauders won 61-54. Jesuit’s playoff victory against VHS boosted their record to 14-13.

This game against the Bulldogs was a back and forth affair. Late in the fourth quarter, Jesuit forced several steals leading to fast break dunks and firmly changed the momentum in favor of the Marauders. Forward Andrej Stojakovic ’23 was a big factor for the Marauders in the win, scoring an efficient 26 points while grabbing 10 rebounds. Andrej also showed his impact on the defensive end with three steals and two blocks.

Guard Owen Ubaldo ’23, who scored 13 points, believes it was an outstanding all around game adding that the home crowd played a big role in elevating the team’s confidence.

“I think the Vacaville game was our best team basketball,” Owen said. “Everyone was scoring, passing the ball; and it was just a fun environment with our Galley Crew and support that we had, so that definitely helped a lot.”

In the second round, Jesuit left the comforts of the home court  to travel to Elk Grove in a match up against the No. 2 seeded Thundering Herd, who were 22-5 coming into the game. Although Andrej scored an impressive 31 points in the contest, the Marauders unfortunately could not keep up in the fourth quarter and lost by the score of 60-51. The loss put their record at 14-14 and ended the team’s post season hopes.

Andrej explains how the team prepared sufficiently and played well against Elk Grove, but could not score down the stretch to put the game away.

“Obviously, Elk Grove won the league and they were probably one of the best teams we faced this year,” Andrej said. “So I thought we prepared pretty well, but we just couldn’t finish the job at the end.”

While the team did well in many games, looking back on the season, it is clear that consistency was an issue. The Marauders had a four game losing streak followed by a five game winning streak at the end of their season. This inconsistency was partly due to injuries and COVID-19 outbreaks.

Head Coach Timothy Kelly notes the team’s perseverance and how they used that as a tool for growth.

“This season we had a lot of obstacles,” Coach Kelly said. “We had a few injuries, and we had to deal with COVID on our team for a while; specifically in the middle of the season. We also played a really tough schedule, especially a lot of road games. So there was a lot of adversity, and I’m really proud of the guys for continuing to play hard and never giving up.”

Looking to next season, Coach Kelly expresses hope for the team’s future with its playoff tested sophomores and juniors.

“I think that there are a lot of guys that, going into next season, will have some bigtime experience,” Coach Kelly said. “[…] and against some bigtime opponents in pressure situations. So yeah, that’s definitely an advantage for us as a team.”

With this year’s basketball season in the rear view mirror, the program is looking confidently toward the future.