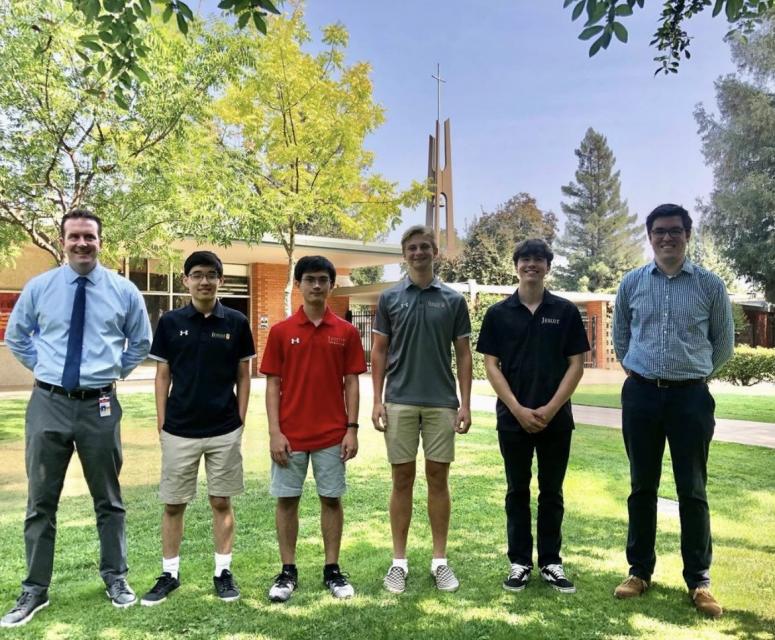 The National Merit Scholarship is awarded to students who scored the highest in the nation and the state on their PSAT and have a history of academic excellence.

To become a semifinalist for the National Merit Scholarship is a remarkable accomplishment.

“In the senior class we have about 240 students, four students who are recognized out of that class of 240, it’s a pretty good achievement,” Mr. O’Connor said. “Knowing there are some years that we might have one or zero [students chosen], those are other ways of identifying ‘this is pretty awesome.’”

Last academic school year, Jesuit had one semifinalist for the scholarship. Nevertheless, whether it’s four students or one, Jesuit always celebrates the accomplishments of its students.

“Last year we had one [semifinalist], Peter Wisner,” Mr. O’Connor said. “This year we are really excited that we have four, and we are just as excited about having four as having one last year.”

Seeing the fruit of his own efforts, Charlie shared how he prepared for the PSAT, and how fulfilling the outcome was.

“I studied for a month before taking the PSAT,” Charlie said. “I went through like three prep books and I took like ten practice tests, and having it pay off like this is really cool.”

This scholarship also allows students more collegiate opportunities thanks to the financial aid the scholarship can provide. According to James, colleges that may have seemed financially unavailable can now be considered by the semifinalists.

“I find it exciting because the National Merit Scholarship opens up a lot of financial opportunities with colleges, and that could come in to be a really big help with the college search process,” James said.

Being a semifinalist is a great accomplishment, but Matthew reminds himself and the rest of the other semifinalists that there is still work to be done.

“I think it’s important [to note] that it’s not over yet, we still have a little more work to do,” Matthew said.

Reaching this point, all four students shared the same sentiment and felt gratitude towards their parents, and the work their parents also put into helping them.

“I thank my parents for making all of this possible, for making this opportunity, for this to happen, for us to do this,” Robert said.

According to Principal Dr. Michael Wood ’99, the students’ achievement brings both a sense of dignity and humbleness to the school.

“It’s a source of pride for the school and it’s a source of humility because these young men have chosen to give their gifts and talents to the school with such intensity that it is an important reminder of the work that we do, and just how grateful we are to the students who have accomplished so much and give that to the school,” Dr. Wood said.

As these students continue to finish up their final year at Jesuit, we wish them luck in their pursuit of their goal in becoming finalists for the National Merit Scholarship.