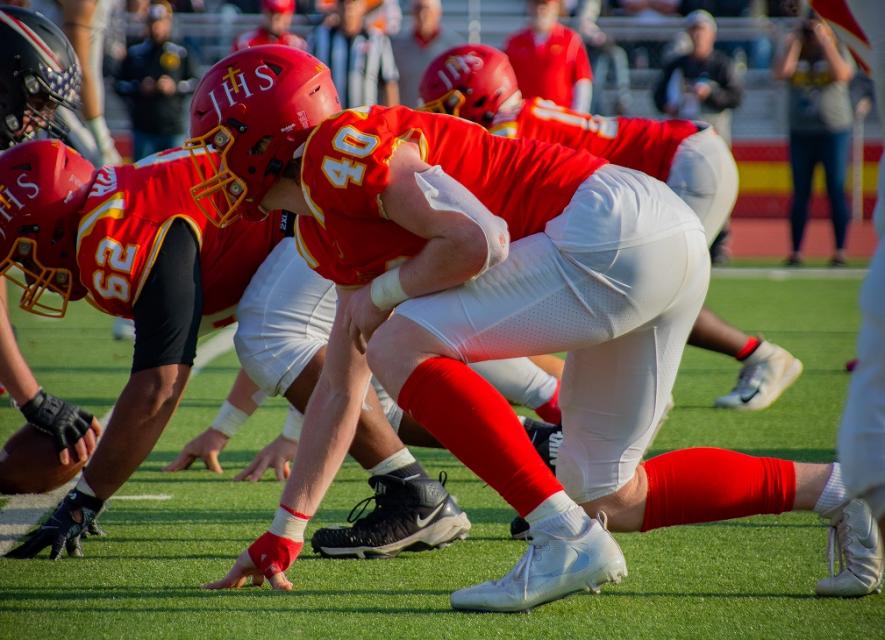 Right guard Blair Horan ’22 believes the team had a good performance and gained momentum throughout the game.

“The team played well,” Blair said. “Things were off to a slow start for the offense but our defense played lights out per usual. Once the offense got rolling there was no stopping us.”

In the second quarter, Jesuit’s offense bounced back thanks to a rushing touchdown from running back Garret McGriff ’22, and a touchdown pass from quarterback Trenton Dewar’23 to wide receiver Reed Datwyler ’22. Jesuit ended the first half up 21-6.

After a slower than usual first half, running back Brenden Sands ’22, who finished with 19 yards, noted the tenacity and heart shown by DOHS.

“Del Oro [High School] was a physical team that didn’t want to have their season end,” Brenden said. “In the first half we definitely had some mistakes but after the half our defense really adjusted and shut them down and our offense really got rolling.”

In the second half, Jesuit shutout DOHS and continued the offensive rhythm they found at the end of the first half. With less than a minute left in the third quarter, Garrett McGriff ’22 got a pick six and returned a 66 yard touchdown. In the fourth quarter, linebacker Alexander Benham ’22 got the team’s second pick six and returned a 34 yard touchdown. Jesuit ended the game with a resounding 40-6 victory.

Once again, Jesuit’s defensive unit held the opponent to under 10 points, which is the fifth time they’ve done so this season. The team also had five sacks and three interceptions. Assistant Coach Jonathan Isaac highlights the team’s execution on the defensive end.

“Defensively we were sound, our run-fits were pretty good, we were physical at the point of attack,” Coach Isaac said. “Special teams did a really good job this week in terms of both corralling those guys on the kick-off team and getting us big plays on the return game.”

“[Luke Desimone] has been battling a wrist injury all season,” Brenden said. “But he came out with his wrist in a cast and absolutely dominated at D-end. He had 3 sacks and multiple tackles as well.”

Blair Horan thinks teamwork was the key to victory in this game and will be the deciding factor in the games to come.

“Our team was really able to rely on each other,” Blair said. “From the first play where Jackson Hagopian returned a kick to the opponents 3 yard line and our defense held Del Oro to 6 points while our offense was getting started. In the coming weeks our team is going to have to really rely on each other and we will have a lot of success.”

Jesuit’s next game will be on Saturday, Nov. 20, on the Marauder’s home field. They will play Folsom High School who are the 3rd seed in the playoffs and finished the regular season with a record of 8-3. FHS was Jesuit’s first opponent of the season and only loss of the season. The winner of that game will go on to play in the Sac-Joaquin Section championship.