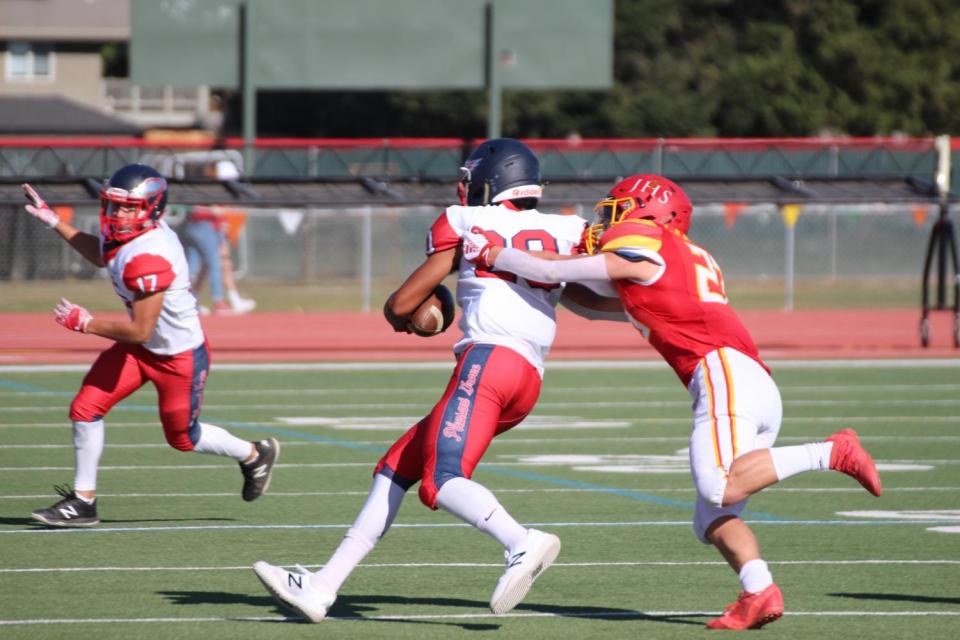 When a loss could have ended their season, the Jesuit High School Marauders defeated the Pleasant Grove High School Eagles 42-21 last Saturday in the final game of the regular season.

Running back Ace Saca ’21 scored on runs of 6 and 75 yards, and Jackson Hogopian ’22 returned a kickoff for a 91-yard touchdown.

PGHS couldn’t get anything going on offense as senior quarterback Nathan Valencia threw two interceptions to Jesuit defensive backs, one to Roman Canaan ’21 and another to Garrett McGriff ’22. He also gave up a fumble to defensive end Noah Clay ’21 which was recovered by linebacker Matt Bettencourt ’21.

The Eagles resorted to the run but were unsuccessful as junior running back Chris Weinberg didn’t gain more than 4 yards on any rushing attempts.

Head Varsity Football Coach Marlon Blanton is proud of his seniors for the dedication they put into turning their season around.

“I told these guys I respect what they’ve done,” Coach Blanton said. “I loved the fact that these guys stuck with it, showed some fortitude, and didn’t quit.”

Jesuit’s first playoff game will be at home on Saturday, Nov. 16, and will be against the winner of the game between No. 5 seeded Central Catholic High School and No. 12 seeded Tracy High School.