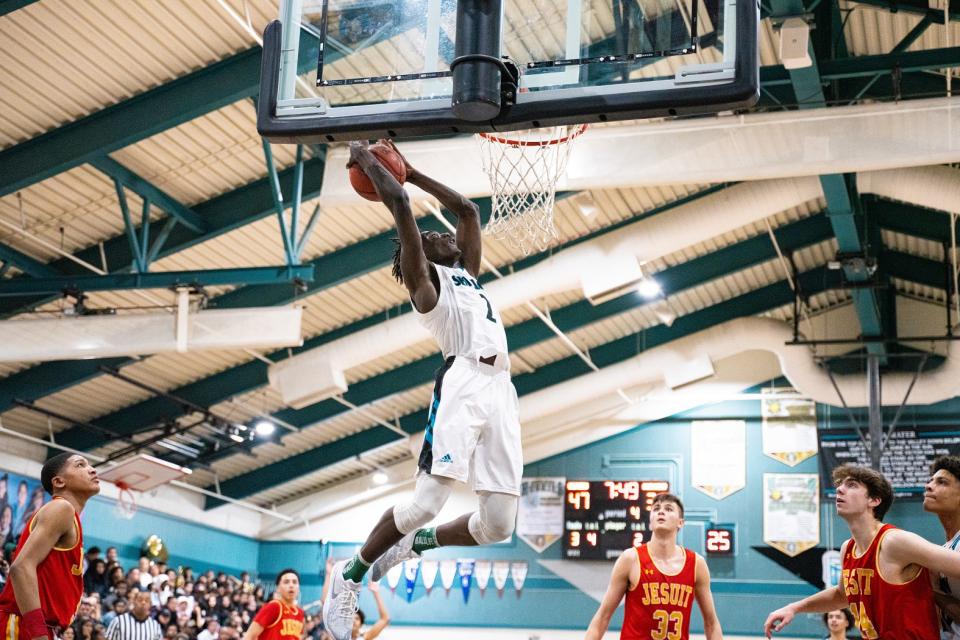 ELK GROVE — When a member of the Sheldon High School basketball team steals the ball from an opponent, it usually results in one outcome: a highlight-reel dunk on the other end, sometimes over a helpless defender. Even without 4-star recruit and 6-foot-8 senior wing Marcus Bagley, who was in a walking boot, the Huskies’ 65-48 home win over Jesuit High School Sacramento on Saturday was no exception.

With a seemingly never-ending stockpile of high-flying dunkers and multi-positional defenders, SHS was propelled by a second-half surge, in which they outscored Jesuit 37-26 after halftime.

While Bagley’s absence gave the Marauders a significant size advantage, they were still outrebounded, even by the Huskies’ guards, who grabbed rebounds over Jesuit’s 6-foot-7 and 6-foot-11 centers.

“We made too many mistakes to beat [SHS] on Saturday,” said Varsity Basketball Head Coach Tim Kelly. “[We had] too many turnovers, and [we] allowed too many offensive rebounds. There is very little room for error against a team that has collected that many talented players.”

Jesuit will have another chance at defeating SHS when the two teams meet up again on Wednesday, Feb. 12. Coach Kelly believes it will be difficult to play SHS and the rest of the Delta League teams for a second time this season.

“Our league is tough and challenging,” Coach Kelly said. “It is always a battle to play everyone a second time during the second half of [the] league [season].”

After losing to SHS, Jesuit lost again on Monday to Cosumnes Oaks High School 63-49. With three consecutive losses, Jesuit is 4-3 in the Delta League, setting up a pivotal game against Franklin High School this Wednesday, Feb. 5.