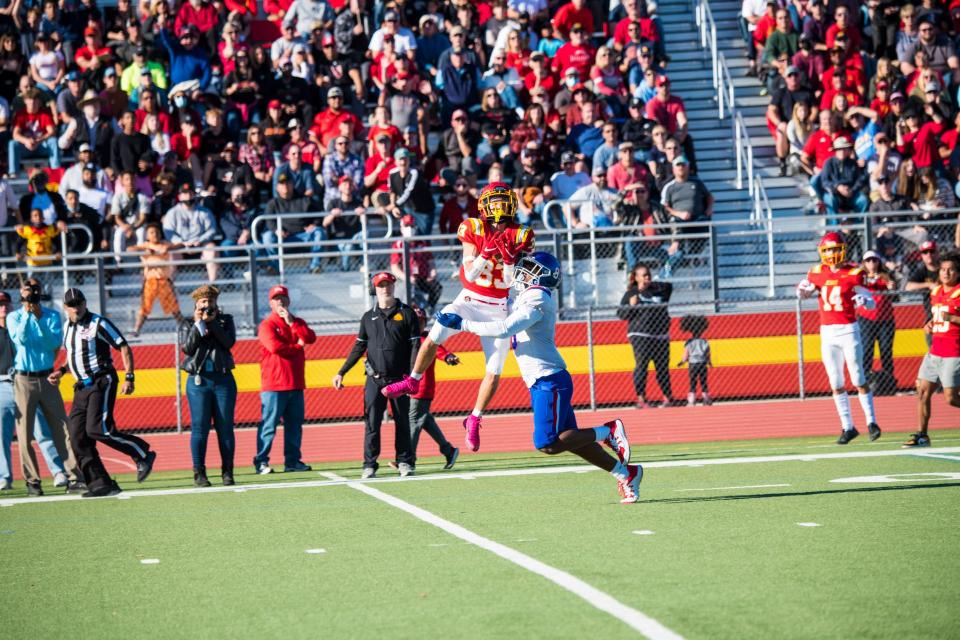 On Saturday, Nov. 20 the Jesuit High School Sacramento varsity football team faced Folsom High School in the Sac-Joaquin Section Semifinals. Jesuit came short of FHS by one point in a 21-22 loss marking their first loss in eleven games and the end of their season.

At the beginning of the game, the defenses were hot, holding the score to 0-0 for the first 11 minutes. With less than one minute left in the first quarter, Kai Santos ’22 ran for a 25 yard touchdown. In the second quarter, Jesuit’s defense allowed a 35 yard rushing touchdown making the score 7-7 at halftime.

In the third quarter, Jesuit was forced to punt, but they fumbled the snap and FHS recovered the ball in Jesuit’s endzone bringing the score to 14-7.

In the fourth quarter, Jesuit moved past the unrelenting defense of FHS and scored a rushing touchdown from running back Kai tying up the score 14-14 with 10 minutes to go.

Jesuit’s stellar defense prevented FHS from scoring on their first drive in the fourth quarter. Jesuit offense responded by scoring a passing touchdown from quarterback Reed Datwyler ’22 to tight-end Kai Wallin ’22 making the score 21-14 Jesuit. This would be Jesuit’s 14th straight point and brought them into the lead with only five minutes left in the game.

But, with a minute left in the fourth quarter, FHS scored a passing touchdown which made the score 20-21. FHS didn’t play for a tie, choosing to attempt a two point conversion for the win. Unfortunately for the Marauders, the attempt was successful, ending the game and Jesuit’s season with a 22-21 victory for FHS.

Despite the loss, right guard Blair Horan ’22 believes that the team played their best.

“The game itself went really well,” Blair said. “I think we played our best overall football game of the season. Our defense really stepped up and so did our offense considering how our first game against Folsom went.”

Defensive back Jackson Hagopian ’22, notes that the effort for Jesuit was high, but a couple of special teams errors cost Jesuit greatly.

“I think we played really well,” Jackson said. “Our effort was there … just a few minor mistakes cost us, special teams errors in specific.”

Assistant Defensive Coach and Film Coordinator Coach Jonathan Isaac, highlights the challenges that Jesuit football players went through prior to and during the game.

“[Our players] were up to the task,” Coach Isaac said. “They really made some huge strides since we played [FHS] in week one. They are championship material, the Folsom program, and we had to play mistake free football, and we made one too many mistakes which Folsom was able to capitalize on. That was tough.”

Beyond the game itself, the crowd and atmosphere were remarkable, despite the game being during a holiday break. Coach Isaac was impressed with the fans that showed up.

“I was really enthused by the crowd,” Coach Isaac said. “I know it was a holiday break, but our crowd was live. It was electric. It felt like football; it felt like playoff football. I want to thank our fans for the support: all the alumni that came back, all the teachers that were there, all the faculty and staff. It was great.”

Although the season was tough, Jackson really enjoyed the journey.

“This was probably one of my favorite seasons I’ve had, especially at Jesuit,” Jackson said. “It was a fun group to be a part of. The senior class was super fun. I mean we have been together for four years, so it’s fun. It was tough. The season was tough; it was a long season. After that initial Folsom game, we improved a lot.”

Even though the season did not end the way the team had hoped, the postseason accolades have confirmed that this was a special team made up of many special players and coaches.

Overall, this year’s Jesuit football team was one of the best the program has experienced. It was great not just because of Jesuit’s impressive record and list of awards but also because of the growth that the players experienced in all aspects of their lives. Coach Isaac expresses how he saw Jesuit players grow.

With many senior players graduating this year, the Jesuit football program looks to continue to show its excellence and dominance in the Delta League in the years to come.