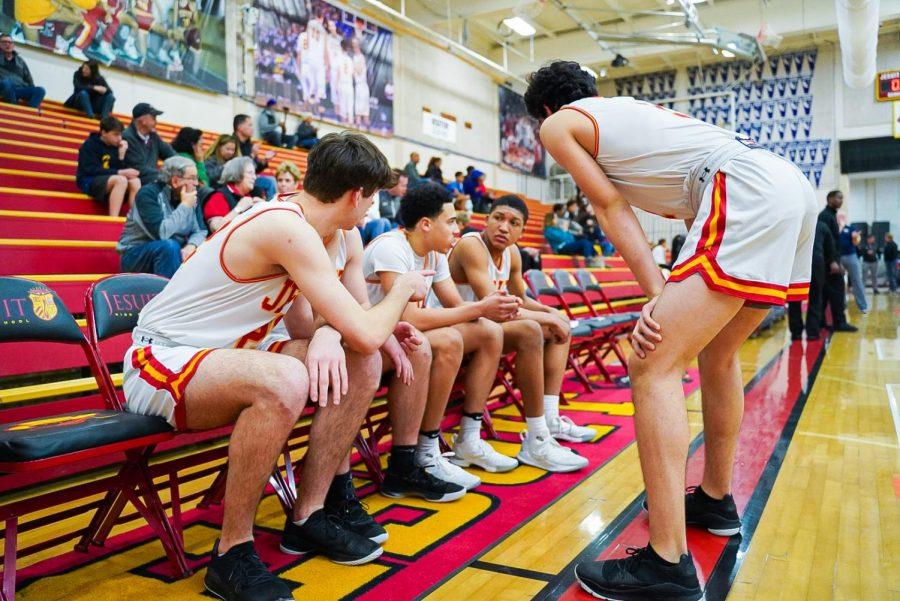 After winning 8 of its last 11 games, the Jesuit High School Sacramento basketball team is on a roll entering the Division II Sac-Joaquin Section Playoffs as the No. 1 seed.

The Marauders finished the season with a 20-8 overall record, 8-4 against Delta League opponents.

Jesuit will play its first playoff game on Wednesday, Feb. 19, against the winner of the game between No. 16 seeded Pitman High School and No. 17 seeded Buhach Colony High School, who will play on Tuesday, Feb. 18.

Jesuit is led by its backcourt pairing of Isa Silva ’21 and Chris Holley ’21. The two guards combined for 52 points in Jesuit’s recent 60-59 win over Sheldon High School.

Chris believes the key to Jesuit’s success will be sharing the basketball.

“On the offensive end, we need to get everyone involved, especially our bigs Jack [Andre ’20] and Alex [Horiuk ’20],” Chris said. “We know by now teams will be focusing on trying to stop me and Isa. What they don’t know is we have some great spot up shooters like Gabe [Dirksen ’21], Jayden [Teat ’23] and Matt [Hoffman ’22]. If we can get them good opportunities to knock down the 3, it will open up the paint to allow us to get it to our bigs if the defense adjusts to extend to stop the 3.”

On defense, Chris wants his teammates to be aggressive and run the floor following each rebound.

“We can’t allow teams to get easy baskets or second chances to score,” Chris said. “We need to crash the boards, secure the rebound, and push the ball up the court.”

While the Marauders enter the playoffs as the No. 1 seed, a section title is far from a guarantee. Jesuit hasn’t faced most of the teams in the bracket this season, leaving some uncertainty on how they will match up against each team.

“We gather film and try our best to get a grasp on who the good players are and what type of game they like to play,” Coach Kelly said. “Then we make a defensive game plan based on the film.”

Assistant Coach Jon Rotz ’92 believes it’s more important for his team to focus on what they’re already good at, rather than attacking opponents’ weaknesses.

“We do game plan for each team, but our game plan is based on what we do well and how we can use what we already do well to gain an advantage,” Coach Rotz said.

Jesuit will host either PHS or BCHS this Wednesday, Feb. 19. The game will tip off at 7 p.m.