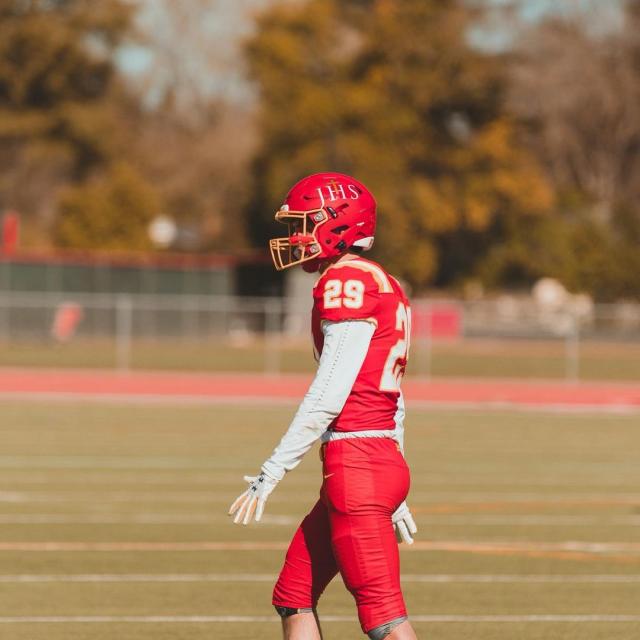 While it was a lopsided loss, Jesuit lineman Peyton McDonald ’21 still took some positives away from the game.

“Our line played really well, way better than I thought we were going to do,” Peyton said. “Up until the third quarter, we could have won that game. After that, we kind of lost it and we had like four straight turnovers.”

“Our strengths were our offensive line,” Coach Isaac said. “They did a good job of creating run lanes and protecting our ball carriers. Our weakness was focus and conditioning. We need to find a way to be more resilient.”

As they did in their scrimmage against Rocklin, the Marauders used multiple quarterbacks against St. Mary’s. Preston Vukovich ’22 was the most effective of Jesuit’s three quarterbacks — completing 12 of his 18 passes for a total of 162 yards.

His sole touchdown pass was to tight end Kai Wallin ’22 just before the end of the first half. Preston also showed some mobility, rushing the ball four times for 25 yards, including a one-yard rushing touchdown in the fourth quarter.

While the Rams had a fairly strong passing attack, they heavily relied on senior running back Tyrei Washington, who rushed for 111 yards on 19 carries and had two touchdowns.

As Jesuit prepares to play its longtime rival Christian Brothers High School this week, Coach Isaac wants his team to practice with a purpose.

The game will be at Christian Brothers on Friday, March 26, at 7 p.m. Due to COVID-19 regulations, only players immediately family will be allowed in the stands. Details and capacity will be communicated directly to players.

Although this year’s matchup was originally set up to be the 50th annual Holy Bowl, the celebration for the 50th rivalry game will take place next season when fans are hopefully allowed to pack the stands at Hughes Stadium to watch the big game.

While this game won’t be the 50th Holy Bowl, Jesuit will mark all the players, especially the Class of 2021, in the history books – and during the 50th celebration next year, Holy Bowl alumni from all years will be welcomed and celebrated at Hughes Stadium.