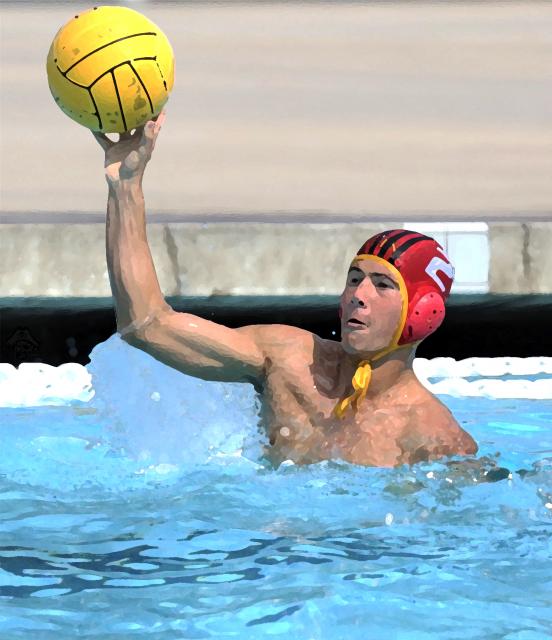 The 2021-22 Jesuit High School Sacramento Marauders water polo season was a memorable comeback season after a 2020 season that was heavily impacted by the COVID-19 pandemic.

The Marauders had a phenomenal beginning of the season opening against Lodi High School with a 16-8 win, but shortly thereafter, Jesuit was handed their first loss of the season in a close contest against Bellarmine College Preparatory, losing 13-14.

The Marauders were captained by Chuck Jolly ’22 and Ethan Smith ’22 of whom teammate Keegan Moore ’23 gives high praise.

“Chuck Jolly and Ethan Smith really helped our team with morale by keeping us focused and having great leadership qualities,” Keegan said.

After a close 10-12 loss to Stevenson High School at the S&R Sport Cup tournament, the Marauders were soon set to play Delta League opponent Franklin High School. Fueled by the  upsetting loss to SHS, Jesuit beat FHS by a margin of 28-2.

Strength and conditioning Coach Jay Nacionales complemented the work ethic of the team and added how the determination to get better in the weight room positively impacted the team’s performance in the pool.

“The non-traditional offseason was difficult to navigate,” Coach Jay said. “But Coach Koerner and the players insisted on putting in more time in the weight room, even though it takes time away from the pool; it definitely had a major impact on the players this year, and paves the way to more success next year.”

After falling to rival Davis High School, by a score of 7-11 in their final game of the regular season, Jesuit had earned the 4th seed in the Division I Sac-Joaquin Section Championship tournament. The Marauders used the loss against DHS to ignite their hopeful run to the Section Championship.

Jesuit won their first game of the Section Championship tournament against Kennedy High School due to forfeit, and powered past St. Mary’s High School in a high-scoring shootout of 15-14. After finding success in the first two rounds, the Marauders finally got their chance to play DHS again in the section semifinal match.

Jesuit and DHS took the game down to the wire with the Marauders finishing on top, walking away with a 10-9 win, ending DHS’s season. The players were ecstatic to complete the revenge win against the DHS Blue Devils. For Ethan, this win was one of the highlights of the season.

“We had been preparing for a long time for Davis, so it felt good to beat them,” Ethan said. “Also, we had lost to Davis about 2 weeks earlier so we wanted to beat Davis even more. Davis had a good team this year and it was an awesome win and experience.”

The Marauders continued on after the devastating loss and entered the Division II NorCal Regional tournament as the 7th seed and were set up to face 2nd seed Clovis North High School in the first round. The Marauders defeated Clovis North with a 11-7 win, advancing them to the next round against the 3rd seed Buchanan High School.

Against BHS, the Marauders played one of their best games of the season as they were able to complete a comeback when down 7-8 at halftime, defeating Buchanan 14-13 and securing a spot in the NorCal championship game.

The Marauders were defeated in the NorCal Finals 7-14 against Redwood High School, but Jesuit’s effort was not a disappointing one, as they performed well in the underdog role by defeating multiple opponents who were seeded higher and took home the 2nd place trophy.

Despite the campaign’s tough ending, when asked about the season, Ethan reflected about his team and the way they performed.

Even though Jesuit was not able to secure a Section title this season, the team had a memorable campaign ending with a 18-15 record and a trip to the NorCal Finals game. Nothing but success is expected in the future, with standouts like Keegan and Dante Nocetti ’24 looking to fill the roles vacated by the graduating senior class.