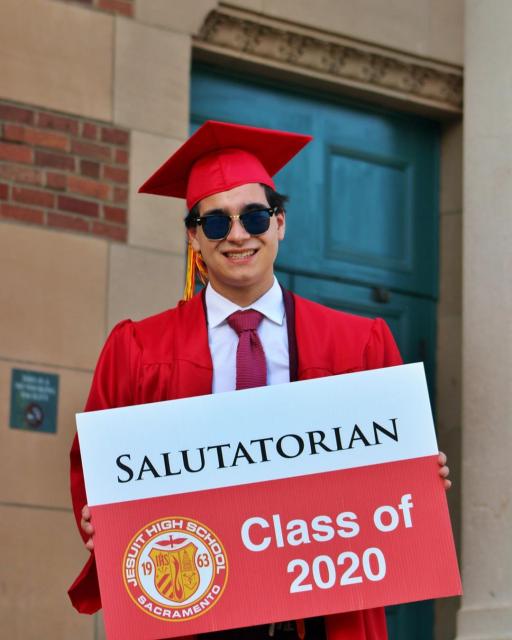 At Jesuit High School Sacramento, students are taught to model their lives after the Grad-at-Grad principles in the ultimate expression of being a “man for others.” Throughout his time at Jesuit, Jonathan Fong ’20 has done just that — applied himself to the callings in his life, a journey that has led him to become the Class of 2020’s Salutatorian.

Self-described as a “naturally competitive spirit,” Jonathan seeks to attain “excellence in all things.” Around campus, he is an accomplished student — he is the president of the Speech and Debate team, French Club, and the Political Dialogue and Advocacy Club (PDAC); a member of Liturgy Workshop and the Senior Retreat Team; the high school representative to the Bishop’s Council for the Diocese of Sacramento; the diocesan pastoral council student representative; and actively involved in Campus Ministry. Outside of school, Jonathan’s pastimes include cycling, golfing, playing piano, leathercrafting, and eating poke.

A man of many passions, Jonathan discovered through his time at Jesuit that his service work has had the most profound impact, a realization that reset his life’s calling.

“I obsessed over trophies and winning, even before my time at Jesuit,” Jonathan said. “It was not until about junior year that I realized that trophies were not the glory that I wanted, but that I was called to something much bigger: service to my Jesuit community.”

This revelation of his greater calling translated into action. Teaming up with his “dream partner in crime,” Jonathan worked with Grant Houle ’20, the religious coordinator, to recentralize the Grad-at-Grad principles in the Daily Examen.

From his experience working alongside Jonathan, Grant only had esteem for his friend and peer’s work ethic and character.

“Working with Jonathan is truly a blessing because he is the kind of person who makes everyone else around him better,” Grant said. “Whether it’s working on the Examen or prepping for an upcoming Mass, Jonathan makes sure everything is squared away. Apart from the business aspect of our relationship, he is a great friend. He is constantly checking in and cracking jokes. He embodies the motto, ‘Work Hard. Play Hard. Pray Hard.’”

Jonathan’s vocational work has brought him to be actively involved in Campus Ministry. Assistant Director of Campus Ministry Mrs. Kelly Barnes describes his commitment to his work and how the nature of his work has impacted the Jesuit community.

“Jonathan has given selflessly of his time, talents and energy to his brothers at Jesuit,” Mrs. Barnes said. “He is passionate about social justice issues (represented Jesuit at the Ignatian Family Teach-in in D.C.), mental health and wellness (presented his story during the Social Justice Summit last year), and faith (outstanding Senior Retreat Team Leader this year). He has also been a leader in Speech & Debate, not only earning accolades for his participation but also inspiring others on the team to rise to a higher level. I believe we are a better community because Jonathan Fong has inspired and challenged us to rise to a higher level.”

Taking initiative to reach out to the Jesuit community after the closure of the school due to the coronavirus, Jonathan continued his leadership of the morning prayer and Daily Examen on Jesuit’s YouTube channel. In addition, Jonathan felt compelled to record a supportive message to his fellow Jesuit brothers.

When reflecting on his four years at Jesuit, Jonathan has found that his most formative and riveting experiences have been in roles of leadership.

“Experiences in leading the school have been what has fueled me,” Jonathan said. “Leading one thing drove me to want to lead others. In a way success beget[s] success, and my call to service has been the most fulfilling experience of my life.”

Recently, it was announced that Jonathan would be the Salutatorian for the Class of 2020 — an honor that came to him as a surprise.

“The news was an utter surprise,” Jonathan said. “I am shocked, and it is an absolute honor to represent the Class of 2020 in this way. It had always been a dream of mine to speak at Graduation, and I just thank everyone at J-High who have given me the opportunities that I dreamed of, and so, so, so much more. I wouldn’t say that being Salutatorian means everything to me because it is kind of like an award so to speak. What I am really proud of is the memories, work, and service that is behind it.”

As Jonathan finishes his time at Jesuit, he will be remembered as an outstanding leader, a passionate advocate, an accomplished student, and a compassionate friend and brother. His dedication and service to the Jesuit community is a testament of his character, embodying what a true “man for others” is and inspiring future leaders to come. Jonathan’s Salutatorian Address will be a part of the Drive-In Graduation Celebration on June 3.