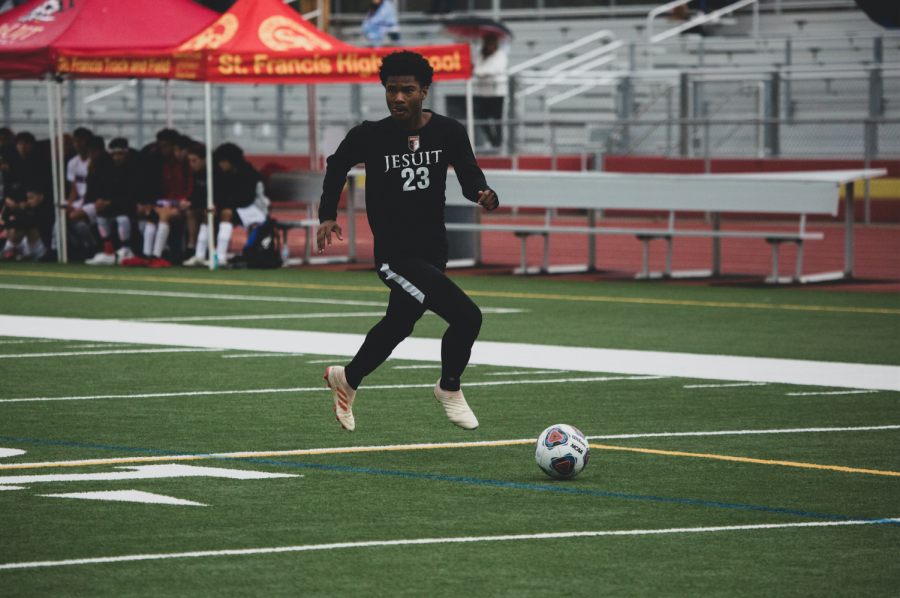 Losing only once this season, the Jesuit High School Sacramento soccer team is ranked No. 2 in the state by Maxpreps.

While the team is led mostly by seniors, one of Jesuit’s main contributors won’t be graduating in 2020.

Jesuit striker Elijah Beverley ’21 is one of the team’s most exceptional scorers with 21 goals this season, averaging almost a goal a game. He is second only to Matt Kahn ’20, who leads Jesuit with 25 goals.

Elijah has seen an increase in goals from last season, his first on varsity, an improvement he credits to hard work.

“This season, I’ve definitely put a lot more work in, especially regarding my touches as well as finishing,” Elijah said.

On top of being a lethal goal-scorer, Elijah is a tremendous athlete, running the fastest 100-meter dash and having the farthest long jump on Jesuit’s track and field team last year.

“His size, speed, and strength are a perfect combination for the 9 (center striker) position,” said Varsity Soccer Head Coach Paul Rose. “He is an excellent target, and he is very difficult for defenders to handle.”

Coach Rose also recognizes that Elijah’s influence is greater than his physical abilities.

“His impact is greater than just numbers,” Coach Rose said. “He exemplifies leadership, sportsmanship, and work ethic on this team. It is a privilege to coach Elijah. He is never a problem in practice and is very coachable. He works hard and always has a great attitude.”

Beyond high school, Elijah hopes to continue his soccer career in college and aspires to play professionally one day.

“I am working to receive a scholarship to continue playing at the collegiate level,” Elijah said. “If the opportunity presents itself, I would love to play pro overseas and showcase my talent on the big stage.”

You can see Elijah play when No. 1 seeded Jesuit hosts No. 4 seeded Turlock High School in the semifinal game of the Division I Sac-Joaquin Section Playoffs. The game is Tuesday, Feb. 25 at 3 p.m.