Lives joined in service for and with others 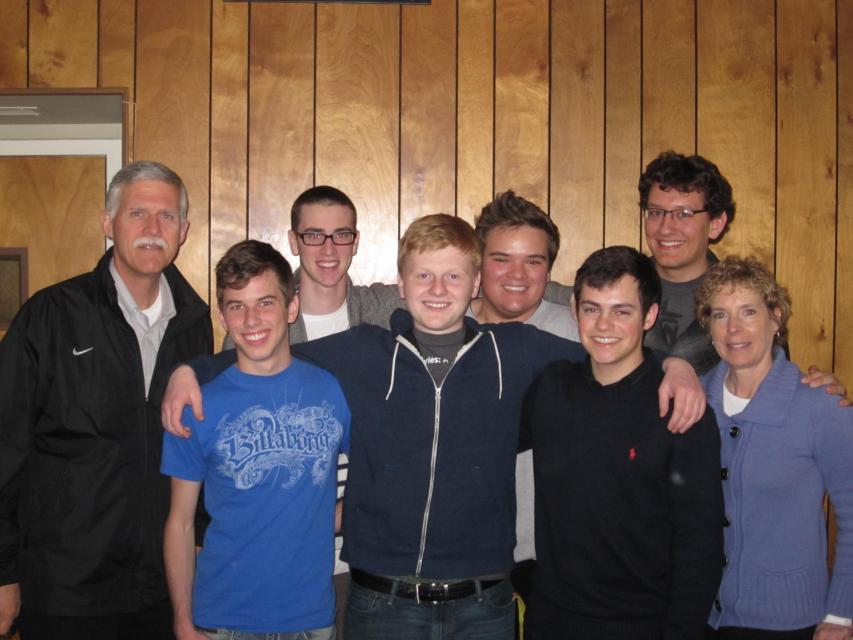 Two longtime fixtures at Jesuit High School Sacramento, Mr. Tom McGuire and Ms. Cleann McGuire, will be retiring this year after over 50 combined years of serving Jesuit — the former as a teacher and coach, and the latter as a counselor and assistant registrar.

With a desire to work in Catholic schools, Mr. McGuire began his career in education by teaching, coaching, and serving as the Boys Dean at St. Paul High School in Santa Fe Springs. After Mr. McGuire spent five years at St. Paul, he and Ms. McGuire moved to Northern California when Mr. McGuire was hired at Jesuit.

Mr. McGuire was hired and started working at Jesuit in August 1981. Since then, Mr. McGuire has worked as a social sciences teacher and track and field coach.

During this time, Mr. McGuire has gained the respect and friendship of his fellow faculty members, including Head Varsity Soccer Coach and Social Sciences Department Chair Mr. Paul Rose.

“It has been an incredible honor and privilege to work, pray, and play with Tom McGuire for the past 39 years,” Mr. Rose said. “We have worked in the same department since his arrival in the early 1980’s and we have taken turns mentoring each other as department chairs. We worked in Campus Ministry and Christian Service together. We coached track together in the early-mid 1980’s. We played faculty basketball after school, on weekends, and during the summer. Mr. McGuire and I even played soccer in an adult men’s league in Folsom.”

While Mr. McGuire is known as a great teacher and coach, it is his character that sets him apart, as Mr. Rose attests.

“Mr. McGuire is one of the kindest, most sincere, intelligent, and dedicated individuals that I have had the honor to work with,” Mr. Rose said. “He always goes out of his way for others and in terms of his commitment to Jesuit, he has always given 110%.”

Teaching at Jesuit for nearly four decades, Mr. McGuire has taught and coached many students, but he still wants to hear what each Jesuit alumnus is up to and is always willing to make time for each of them.

“Class always stops when an alum pays us a visit – it’s an opportunity for them to share their successes and failures from college — to encourage and challenge the next group coming up,” Mr. McGuire said. “I am always most proud when alums make a drop at the trailer during the Christmas Food Drive.”

Mr. McGuire has given much to Jesuit, but he recognizes that also has been given much by Jesuit. As his career comes to a close, Mr. McGuire is grateful for many teachers and coaches he has worked with.

“Over the course of my career I’ve had the privilege to coach with many of my colleagues: Walt Lange who encouraged me to join him, though I knew very little about the sport, on his track staff in 1983; Ross Evans, Paul Rose, Tim Beers, David Zielke, Phil Nuxoll ’83, Ted Hornback ’83, Mary Friedman, Bernie Bernardi, Tom Witzgall ’98, John Badovinac ’97, Dave Badovinac, Nick Lai and Rod Jett,” Mr. McGuire said. “I am grateful for all the nudges, insights, and gifts each of these remarkable people shared and continue to share with me.”

After arriving in Sacramento with Mr. McGuire, Ms. McGuire initially worked as a social worker. While aiding families, she found she was called to help teens transition into young adulthood, so she went back to college and earned her master’s degree in educational counseling. When a counseling position opened at Jesuit in 2003, she applied and was hired.

Ms. McGuire finds that her time at Jesuit has fundamentally changed her. She especially remembers the counseling department who “mentored, challenged and helped [her] develop the skills and care needed to assist our students as best [she] could.” However, that isn’t to say that they were the only people who brightened her time at Jesuit.

“The people at Jesuit will always be my brightest memory!” Ms. McGuire said. “The numerous students I worked with as a counselor who shared with me their challenges, goals, and accomplishments, the students who greeted me with smiles and ‘Hiya, Ms. McGuire’ daily as we passed each other on campus, the staff and faculty, those who have left and those who have remained — each welcomed me and enriched me in ways they will never really know.”

For the last four years, she has been in a kind of “retirement” from counseling and worked as assistant registrar under Registrar and Admissions Assistant Ms. Debbie Case, who is very grateful for her help and the opportunity to spend time with her.

“She is always dependable, and honestly, there isn’t anything she can’t or won’t take on,” Ms. Case said. “I learned a lot from her with her knowledge and life experience in counseling.

Personally, there isn’t a better person out there who I would call a more caring friend than Ms. McGuire. She is just an altogether great person.”

In their retirement, the McGuires plan to visit and catch up with family and friends as well as travel. Mr. McGuire hopes to continue officiating track and cross country meets. Ms. McGuire hopes to use her social work degree once more by volunteering to help homeless and struggling families.

Let us close our farewell to the McGuires by hearing once again from those who know them best.

“[Mr. McGuire] is the role model of a man for others and has lived the Jesuit vision his entire career,” Mr. Rose said. “People like Tom do not come around very often, and Jesuit has been blessed with his talent, humor, and hard work for nearly four decades.”

“My fondest memories are going to be the compassion and care [Ms. McGuire] has for others!” Ms. Case said. “She has a special gift for that. Just watching how she approaches others with her words and actions, I strive to be more like her each day.”

Thank you Mr. and Ms. McGuire for showing us all how to live a life in the service for and with others.