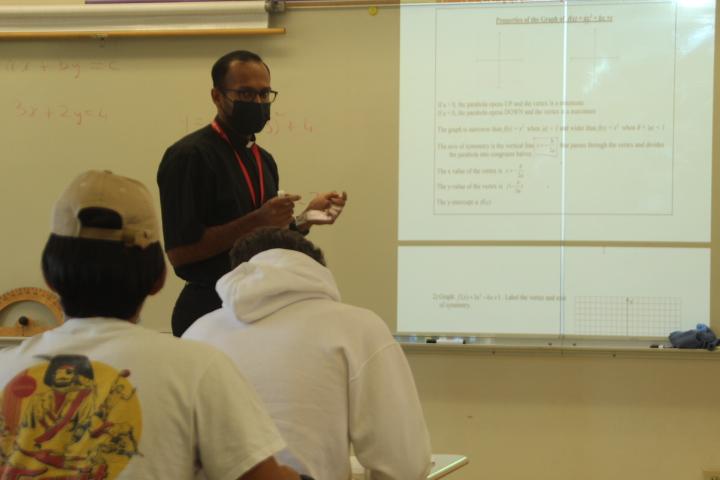 Mr. Daniel Mascarenhas, S.J. is a Jesuit scholastic who came to Jesuit High School Sacramento this year as part of his path to priesthood. After studying philosophy at St. Louis University in Missouri, Mr. Mascarenhas was assigned to the Golden State where he had previously worked as a mechanical engineer in Silicon Valley.

Mr. Mascarenhas was born and raised in Western India where he attended a Catholic school from 1st to 10th grade. His normal routine in India does not sound much different than what students at Jesuit experience every day.

“Once you finished homework, after a couple of hours like 3 PM -5 PM, we would play some sort of soccer or cricket in the nearby fields,” Mr. Mascarenhas. “Another pastime was fishing or swimming in our nearby river.”

Academics was a big part of his life growing up. Mr. Mascarenhas always had an idea of what his future profession would be.

“Where I grew up, if you are smart, or at least if you’re good at school, you either become a doctor or an engineer,” Mr. Mascarenhas said. “I couldn’t stand the sight of blood, so I decided to become an engineer.”

He went to school to become an engineer and then decided to go abroad like many of his classmates. He enrolled at the University of Minnesota to further his pursuit of engineering. Soon after graduation, he found himself moving into Northern California’s Silicon Valley to start his new career.

But one day while worshipping at church, Mr. Mascarenhas had an epiphany.

“I had this thought; what would I be happiest doing?” Mr. Mascarenhas said. “And for some reason the thought came as a priest. I guess it was a reflection of the things that were exciting to me. I really liked talking about aspects of faith, whether God exists, or the meaning of life.”

“The fact that [Mr. Mascarenhas] does math and theology I think is a really cool overlap that I have in my own background,” said Mr. Strawn. “There is kind of a cool left brain, right brain science, philosophy kind of mesh between those two.”

Mr. Mascarenhas strives to teach his students by relating math and theology to real world examples.

“I often try to talk about things that are a part of life,” Mr. Mascarenhas said. “Today we were talking about slope in Algebra II. Hopefully people were able to apply the idea and say ‘Oh I saw a seven percent gradient sign on the I-80, I now know what seven percent gradient means in terms of slope.’ Something like that.”

Most importantly, Mr. Mascarenhas’s teaching philosophy is one of hope and true belief in his students’ potential.

Mr. Mascarenhas’s unique background as a Jesuit and an Engineer gives him a dynamic quality, making him a great addition to both the Theology and Math departments.