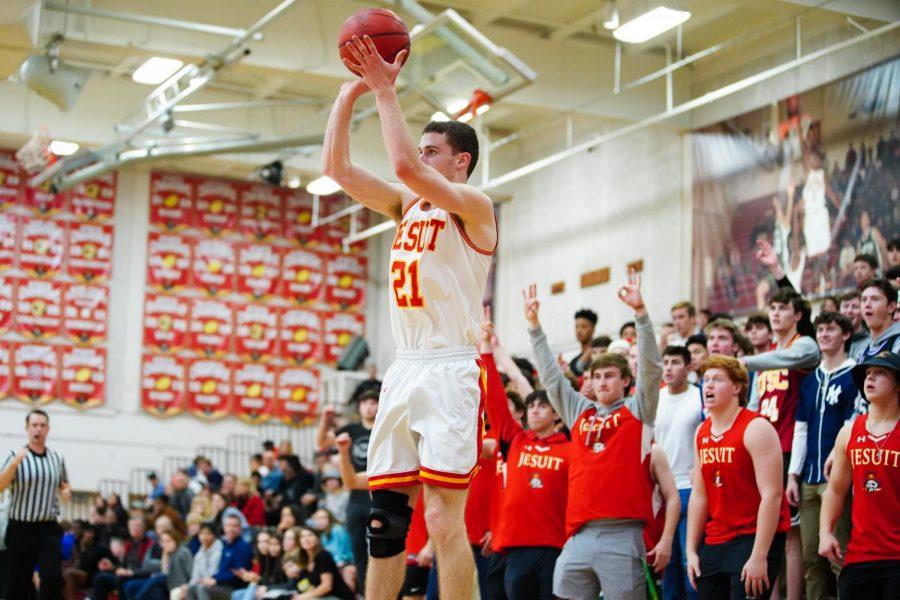 After defeating St. Paul’s High School in round one, Jesuit was eliminated from championship contention after a 40-38 loss to Brophy College Prep in the semifinal game. Jesuit then played Cathedral Catholic to decide third place.

With a tall, talented man like Anyanwu occupying the paint, Jesuit’s relied on its perimeter shooting as the team hit six three-pointers in the first half. Jesuit’s long-range assault was led by guard Chris Holley ’21, who nailed four three-pointers and finished with 24 points along with 6 assists.

Chris’ dominance from outside the arc was enough to propel Jesuit to a 71-66 victory and 3rd place in the tournament.

Chris attributes his success to his coaches and teammates believing in him.

“I take the trust my coaches and teammates have in me to do what I can to help our team by facilitating, getting everyone involved, and scoring,” Chris said.

“He works really hard, and he helps us push the tempo,” Isa said. “He’s going to continue to get better, and that will only make our team better.”

After getting 3rd place, Isa wants his teammates to pay closer attention to the little things that make a team successful.

“We have to continue to focus on the details and stay together,” Isa said. “Details win championships.”