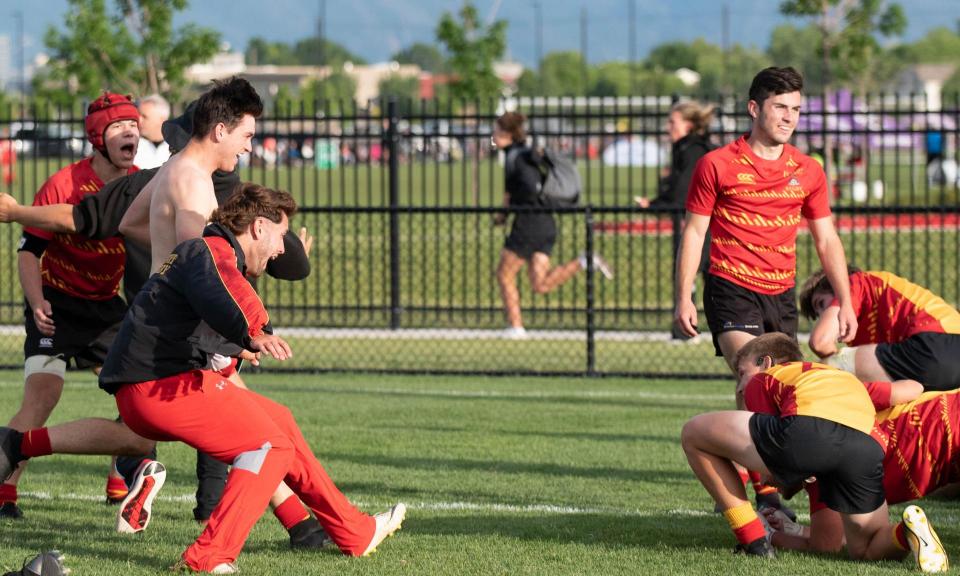 There is no way we can lose, or so I thought as I awaited the whistle that would signal the start of our second rugby game that day. Our first had been in the morning when we won the semifinal game against our longtime rival Gonzaga High School.

Our final opponent would be Herriman High School, a team we had already defeated in a friendly game. The whistle came, and as the half played out, I was seriously beginning to question my earlier confidence.

At the beginning of the second half, Herriman tied the game with an early try, leaving us scrambling to regain the lead. Herriman had learned from their early-season defeat and had adjusted their defense to our attacking scheme.

Our chance to pull ahead came midway through the half when we got a lineout near their goal line. I started to call for a maul, but I was interrupted by Laiatu Latu ’19 who called, “England.”

Laiatu was easily our best ball carrier, but I didn’t know if he could execute “England” against a team who had adjusted to us so well. I hesitated but then committed. If anyone could pull it off, it was Laiatu Latu.

We stepped up to the lineout as a forward unit. Just then, I shouted and pointed at Aiden Goveas ’20, who was standing right next to me, “Wait no, you’re supposed to be over there!” Aiden and the Herriman forwards stared at me, incredulous.

Then Aiden, pointing at nowhere in particular, shook his head violently and shouted, “No, you’re supposed to be over there.” From the sideline G.H. Miller ’19 added to the chaos shouting random commands, leaving the opposition to look on with a mix of confusion and amusement.

Still shouting, I tripped, fell face-first into the ground, and tasted grass and dirt, thus adding the cherry to the top of the pandemonium. But I smiled through the dirty mess; Herriman had bought our ruse. I looked over just as Laiatu, who had run over the oblivious defender unfortunate enough to be in front of him, scored the try that put us ahead.

We managed to hold on to a narrow lead to the last few minutes. All we had to do was run down the clock and then kick the ball out to win. We did just that: we ran the ball into their defense, secured it, and kicked it out, thereby winning us the game.

Except we hadn’t won, apparently.

The clock on the scoreboard had read that no time was left but the official game time is kept by the referee, and he said there was still time for one more play. The ref called for a Herriman lineout, sighs of relief emanated from our opposition; cries of disbelief came from us. But there is a rule that rugby holds in high regard: players don’t argue with the referee.

We prayed that our dominant throw-ins would continue for one last time, but it didn’t; they caught the throw-in. We spent the rest of the match defending for our lives.

The game went on several minutes longer than the allotted time as Herriman slowly but relentlessly punched their way closer to our try line. Suddenly, they switched tactics, quickly shipping the ball across the field to their wing who had an open path to a try that would win them the game.

The Harriman wing was met by David Hause ’21, a sophomore at the time and easily the smallest guy on the field, who wrapped him up and held on.

Herriman’s wing kept going, though, past the fifteen, the ten, the five-yard line until he was met by more of our defenders. His momentum was still carrying him forward, and I observed in horror as I ran towards the pile that the sideline referee still hadn’t raised his flag signaling that the Harriman player had been out.

Time seemed like it had stopped in those moments. The sideline referee looking down at the pile of people below him. The head referee was trying to see if the ball had been grounded. The hopeful faces of both teams lined the opposing sidelines.

Finally, after what seemed like forever, the sideline referee slowly, hesitantly, raised his flag signaling the end of the game and no try for the Herriman winger who had been one yard short of winning it all for his team.

As the referee blew the whistle, we all collapsed in a heap. But I didn’t lose awareness;in fact, for the second time that game, I was smiling. Smiling because while winning that game had probably been the most difficult experience of my life, in just those few moments lying there before parents and players rushed the field to congratulate the new 2019 National Champions, a season’s worth of work was repaid in full, and with interest.