Spikeball spikes in popularity at Jesuit 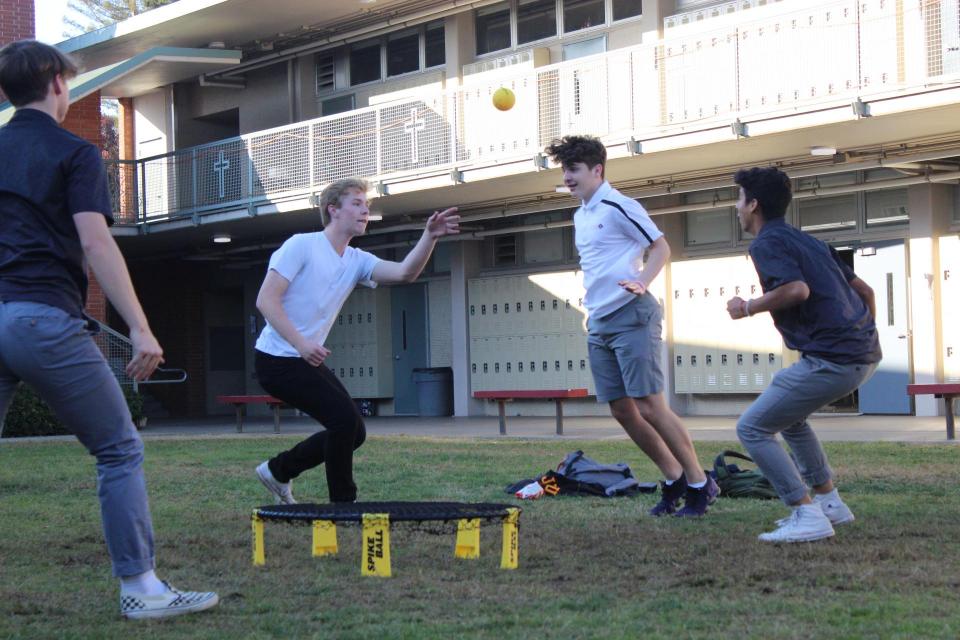 Spikeball has been on Jesuit High School Sacramento’s campus for multiple years. Even today, there are students playing Spikeball daily at lunch and during community periods.

Spikeball is an outdoor game that requires four players and it involves vollying a small ball. Players spike the ball down onto a circular net as the players rally for a point.

Mr. Paul LeBoeuf, the director of campus ministry, has seen the sport of spikeball at Jesuit evolve and thrive year after year.

“Spikeball has been around on Jesuit’s campus for years,” Mr. LeBoeuf said. “I even remember the days of Mr. [Adam] McGrew ’15  and his friends tearing up the grass in the senior quad.”

Joshua Dietz ’22, the president of the Spikeball Club, is running the club for the first time this year, and is looking forward to the competition.

“It helps students come out and show their competitive side while creating a bond and chemistry with your partner,” Joshua said.

Spikeball Club is offering a competitive environment for all types of players. So students can expect competitors with similar skill levels.

“Students do not need any experience to join this club,” said J.P. Leatherby ’22. “We are happy to teach new players how to play.”

Spikeball has had a boost in popularity on campus thanks to the community period, which has helped connect students and been an outlet to make new friends. Spikeball is a great way to blow off some steam during normal school hours.

“I usually play every lunch in the senior quad and whenever I have time after school during community as long as I have no other school or sports to do,” Joshua said.

Spikeball on campus has quickly turned into a tradition among peers, and hopefully the younger classes can pass the torch on for years to come.