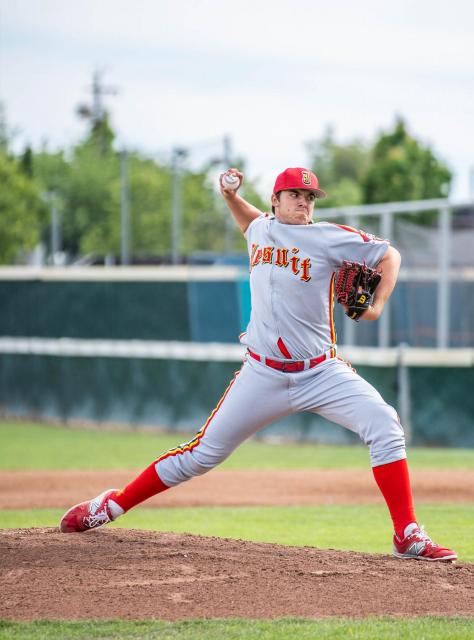 In the afternoon of March 12, 2020, pitcher Tonko Susac ’21 had just finished one of the best performances of his young baseball career — pitching six innings and striking out nine hitters to lead Jesuit High School Sacramento over the nation’s No. 1 ranked team, De La Salle High School.

With a star-studded team that featured a collection of future college athletes, an undefeated record, and now an unthinkable upset win, the Marauders seemed poised for a section title run.

But almost as soon as Tonko and his teammates could celebrate their victory, the COVID-19 pandemic forced Jesuit to suspend all athletic events indefinitely. On April 3, the California Interscholastic Federation followed suit and canceled the spring sports season.

Suddenly, the team with limitless potential couldn’t play. Luckily for Tonko, a junior at the time, there was always next season.

But during the offseason, Tonko suffered an arm injury that would cost him his senior baseball season.

“My arm was in lots of pain and I knew something was wrong, but diagnosing the injury and getting the right treatment was very hard,” Tonko said. “In late November, I decided to go forward with UCL Primary Repair surgery. I felt this was the right choice for the longevity of my career, but I was very upset because I was really looking forward to this season.”

During his recovery, Tonko’s been helping out with the team, something Jesuit Head Varsity Baseball Coach Joe Potulny ’76 appreciates.

“It’s been neat to see him this year where he’s injured — he’s a team leader even though he’s not playing,” Coach Potulny said. “He’s in the bullpen helping the pitchers, and if he decides to coach somewhere down the road, he’d be excellent.”

While his high school career ended much quicker than anticipated, Tonko’s baseball journey is far from over. This fall, Tonko will be pitching for the University of Arizona where he will join his cousin Daniel Susac ’20, a catcher on the team.

The pair of cousins are both highly-touted prospects, but they aren’t the only successful athletes in their family. Andrew Susac ’09, Tonko’s cousin and Daniel’s brother, is a catcher in the Pittsburgh Pirates organization. Daniel’s other brother Matt Susac ’10 pitched at the University of Nevada, Reno and Tonko’s older sister Sophia Susac is a synchronized swimmer at Stanford University.

For Tonko, having other athletes around helped him see what it takes to reach a high level. He also credits a lot of his success to his dad John Susac, the pitching coach for Jesuit until this year.

“Growing up in a baseball family has helped a ton,” Tonko said. “My dad taught me everything and started it at a very young age. My older cousins helped me a lot and gave me lots of tough love along the way. I’ve been able to see a lot at multiple levels with Andrew. He’s given me tons of insight and knowledge about what it takes to get to the next level.”

“Tonko has always been very into baseball, even as a little kid,” John said. “He’s been in the environment — watching his cousin Andrew play. I introduced the game to him, I never forced it on him, but I introduced it, and he always loved it. It’s been a complete blast as far as me being able to do something with my son everyday that we both enjoy.”

According to outfielder Carsen Keim ’21, Tonko’s love for the game is most evident in his advanced knowledge of pitching.

“He knows more about pitching than most pitching coaches,” Carsen said. “He evaluates pitching to a level that is absurd for a high school athlete. He has learned a lot with statistical data and learns a lot as he’s followed Driveline baseball through his years before even high school. He’s one of the best pitchers around because his intelligence of the game and how to get hitters out is top notch.”

Even after losing his final two high school seasons due to COVID-19 and an injury, Tonko remains poised to be the latest Susac to play collegiately and hopefully professionally one day.