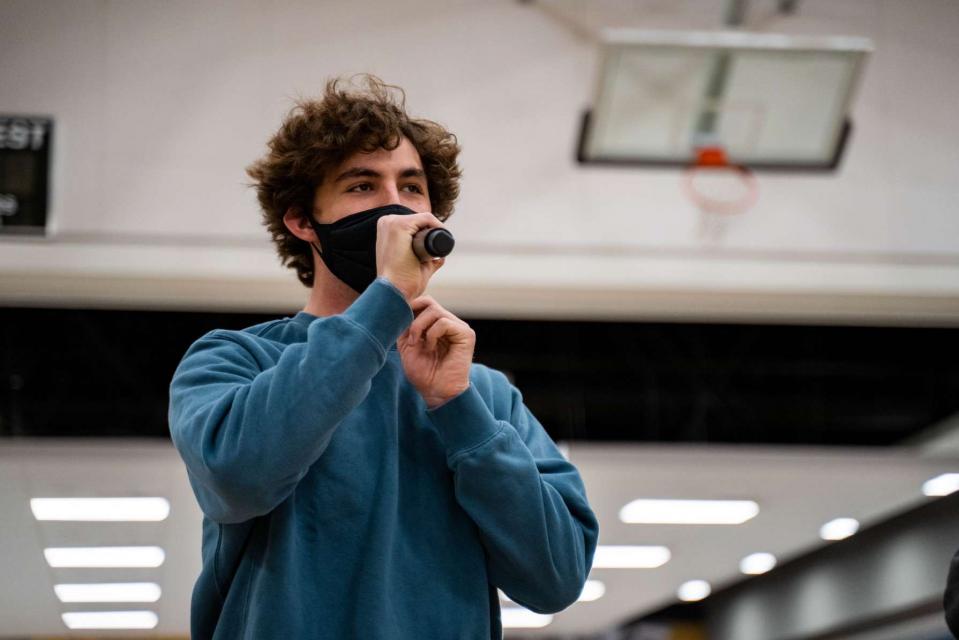 Each year, the Salutatorian Award is given to a Senior who is recognized as an outstanding representative and religious leader of his class. For the Class of 2021, the recipient was Jake Hall ’21.

Being a member of the Campus Core Ministry Team, the Student Executive Council Vice President, and a star athlete, Jake seems to have a lot going for him as he prepares for his first year of college in the fall. While that might be the case, Jake’s journey to get to where he is now has been anything but smooth.

For Jake, no obstacle was more significant than when his father Justin Hall died by suicide on Nov. 27, 2017.

It was a death that not only rocked Jake and his family, but the entire Jesuit community as Justin was a History teacher and football coach at the school.

Following his father’s death, Jake felt he had a choice to make.

“At first, my grades suffered a little bit, and then I realized it was my choice of whether I wanted to let sadness and grief define me, or continue on with my life and use my dad’s death as a way of being a better person, and using it as a way to help others rather than just be sad with myself,” Jake said.

Jake chose the latter and became a leader among his classmates through his work in Campus Ministry, the Student Executive Council, the football team, and his role as Big Brother mentor to freshmen. He has shared his story numerous times, including when he spoke at Jesuit’s 2019 Social Justice Summit, which is focused on mental health and wellness.

“I looked at it as a way to be better for myself and others,” Jake said. “I gave a speech on mental health, and the main message was seek help, or don’t be afraid to talk about it.”

As he pushed through the pain of his father’s death, Jake excelled on the football field. He was a three-year starter on the varsity squad and his skills earned him the chance to play college football at Carleton College in Minnesota.

But shortly after he made his college commitment, Jake endured a career-ending injury in a rivalry game against Christian Brothers High School on March 26, 2021. Jake dislocated his left shoulder, which has already been surgically repaired. In the words of Jake, the injury was “my body’s way of telling me it’s time to hang the cleats up.”

Unable to continue playing football, Jake is set to attend Cal Poly San Luis Obispo where he will major in business.

“Jake is a strong leader who knows how to lead from the front and the back,” Coach Blanton said. “Growing up is already difficult, Jake has had a lot of difficult challenges thrown at him and to his credit he has dealt with them, with grace, with emotional honesty, and the utmost maturity. I am grateful that Jake has allowed me to be a part of his journey.”

Jake is equally grateful for what Coach Blanton taught him on and off the field.

“Coach Blanton has just been an incredible mentor for me, and someone who I don’t just talk about school with or football with, but life in general,” Jake said. “He taught me the importance of football being a parallel for life in the future, and how to be the best person I can be and show others how to do that.”

“I knew Jake before this year began, but I have definitely gotten to know him better through our time together with the Student Executive Council,” Mr. Kelly said. “Jake is a natural leader. He appears to be comfortable in the spotlight and not afraid to stand out from the crowd.”

Jesuit has been a place for Jake to learn and be a role model for students. He is thankful for this opportunity and for those who believed in him.

He is also very appreciative of his teachers and friends.

An exemplary student and a leader, Jake will surely find new opportunities to continue impacting others as he begins his college experience this fall.