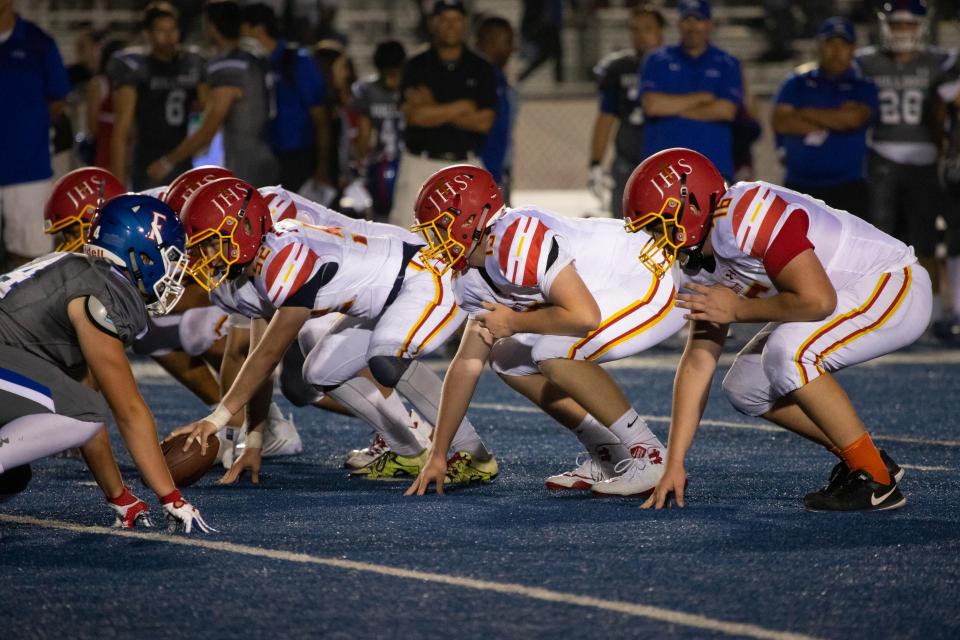 After lots of rescheduling and hoping for good air quality, the Jesuit High School Sacramento Marauders and Folsom High School Bulldogs were finally able to play against each other to open the football season on Monday, Aug. 30.

The game ended with the Marauders losing by a landslide in a 7-56 loss against the Bulldogs. Jesuit lost 3 fumbles which was a leading factor in the lopsided defeat.

Despite the difficult loss, the Marauders had some notable plays. Quarterback Preston Vukovich ’22 completed a 10-yard pass to Tight End Kai Wallin ’22 in the first quarter and a 15-yard pass in the second quarter. Running back Jackson Hagopian ’22 led all receivers with 2 receptions and a total of 35 receiving yards.

Linebacker Alex Benham ’22 expressed his disappointment with the turnout of the game.

“I’m definitely very disappointed,” Alex said. “I didn’t think we were gonna get blown out like that at all. It’s definitely not what I wanted it to be at all.”

Offensive lineman Blair Horan ’22 shared what he thinks the team could do better during their next game.

“I think we need to improve on doing the little things, improve on executing our plays, and just executing overall,” Blair said.  “We got blown out, which is not alright. This is not what Jesuit football is about. We have enough talent and we should be better than that. We have the talent to go really far and do really good things. We’re gonna be really good, it’s just ‘when?’”

Despite the disappointing loss, the atmosphere at the game was vibrant, even when the Marauders were losing by a lot. Jesuit Varsity Football Scout and Film Coordinator Coach Jonathan Isaac shares his appreciation for the student section and Galley Crew for their constant support of the Marauders.

“It was hot, but the atmosphere was still reminiscent of football before COVID,” Coach Issac said. “The student sections were really good and fans were really supportive. It was good to feel a little bit of normalcy in today’s world.”

With the support of the students and more practice, Coach Isaac is determined to move on from this loss and not let it affect him and the team.

Blair is also optimistic about the next game at Granite Bay this Friday and thinks that good preparation will help them win the game.

“I think if we have a good week of practice, if we can figure some things out, then I am confident,” Blair said. “The game itself had a lot of flaws in what we were doing, but I think we can come back from it and turn things around.”

The next football game is against Granite Bay High School today, Sept. 3, at GBHS at 7:00 p.m.. Students and parents can buy tickets here by scrolling down to Boys JV and Varsity Football vs. Jesuit High School.

If you would like to watch the game but cannot make it to GBHS, live streams are available on the NFHS Network via a subscription.