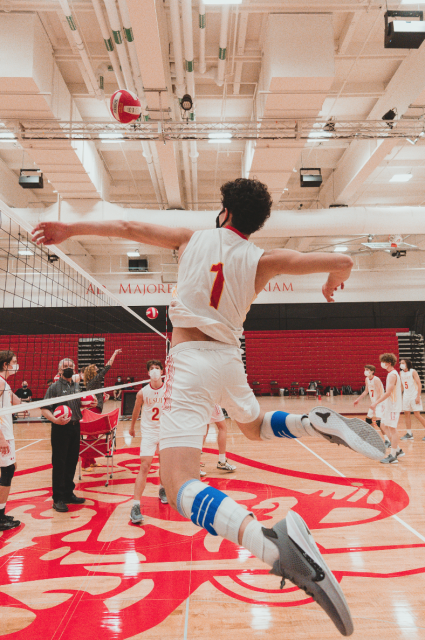 While it has been common for Jesuit High School Sacramento volleyball teams to be atop the Delta League standings, the 2020-2021 squad is on another level. This year’s team features a number of highly skilled athletes, but one player stands out among the rest.

Jesuit setter Taylor Marks ’21 is the star of the school’s nationally-ranked volleyball team, which hasn’t lost a match since 2019.

Being the setter, Taylor is the main contributor to the offense, something he does exceptionally well according to outside and right-side hitter Sam Oshita ’21.

“The best part about Taylor’s game is his ability to take a bad pass and turn it into the best possible set for the hitters up front,” Sam said. “He’s hands down the best setter I’ve ever played with.”

While teammates like Sam have been impressed with Taylor’s talents, college recruiters have also taken notice. Recently, Taylor announced he would continue his volleyball career at Cal Lutheran University.

For Taylor, playing volleyball at the next level is a dream come true.

“A big part of my decision came from completing my dream of becoming a collegiate athlete regardless of the division,” Taylor said. “Ever since I was a kid, I’ve always dreamed of competing at the next level against top-caliber athletes.”

Choosing a college to compete at wasn’t a tough decision for Taylor, given that his brother Logan Marks ’20 plays at CLU now.

“Walking on campus, I had a gut feeling about the school; it was everything I wished for in a school,” Taylor said. “Another big part of why I chose CLU was because I am able to play alongside my best friend and brother, Logan Marks. Since the beginning of my career playing volleyball, we have been on the same team regardless of the age. [When I was] a 15 year old, he was two years older, we both decided to play for the best team in the Sacramento Area, [Northern California Volleyball Club] with all the top dogs. Many of them now have continued on to play Division 1 or Division 2 volleyball. We have formed a bond that is nearly inseparable.”

“I want Taylor to have a wonderful college experience,” Ms. Marks said. “I know he is going to have that at California Lutheran University. Coach [Kevin] Judd is exactly the type of coach we want coaching our boys. He is a great role-model for young men, fair and honest.”

While Taylor is excited to compete in college, he doesn’t believe that a professional career is the right path for him.

“Unfortunately, there isn’t much more of a career in volleyball inside the United States,” Taylor said. “In order to play professional Men’s Volleyball, you need to travel to a different country and try out for a team overseas. With that being said, it doesn’t sound like something I would like to pursue. After college, I’m planning on moving back to the Sacramento Area, possibly working for our family business (real-estate) and best of all watching my younger siblings grow up and attend most of their athletic events.”

As Taylor graduates, he looks back at his four years, thankful for his experiences and the people he’s encountered.

“I wouldn’t have wanted to change anything about my journey at Jesuit,” Taylor said. “I’ve learned so much about myself, how to persevere during hard times and many life lessons from upperclassmen and faculty around campus. Coming into Jesuit, you always hear about ‘The Brotherhood,’ [this] is the best part about Jesuit: being side by side with your brothers, classmates and life-long friends. I have made so many lifelong friendships it is UNREAL.”