When one door closes, another one opens 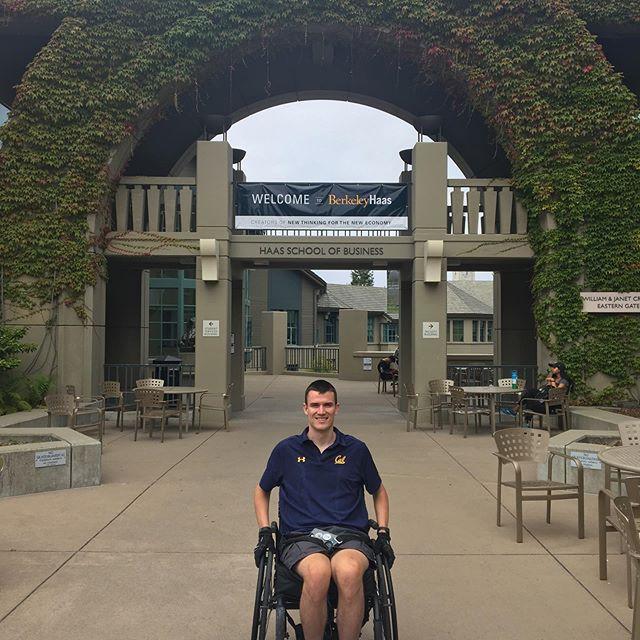 On May 6, 2017, a doctor from the Santa Clara Valley Medical Center uttered these words to Robert Paylor ’15, then a sophomore on the UC Berkeley rugby team. Paylor had sustained a spinal cord injury in the Varsity Cup Championship match against Arkansas State University.

“Now if there was a door in front of me, a metaphorical door, and beyond this door was opportunity, optimism, and hope – this doctor slammed this door in my face and he locked it,” Paylor said.

Fast-forward more than 1000 days and Paylor is doing what doctors told him was impossible, standing up into his walker and even walking on the field he was injured on.

On his journey towards walking on his own, Paylor became a public speaker. On April 21, the Executive Council of Jesuit High School Sacramento hosted Paylor on a Zoom webinar that students and faculty members could attend. The talk was part of the school’s speaker series.

At Jesuit, Paylor was the captain of the football and rugby teams as a senior, a Kairos leader, and the school’s first student band director.

Paylor began his Zoom webinar by discussing his time playing rugby at Cal, specifically his sophomore season, his first as a starter.

“My life was awesome,” Paylor said. “So much of my worth, so much of my accomplishments came from simply being a rugby player – being a pretty good one. Our team also was having a pretty successful season. We had worked our way up to compete for a national title – my first collegiate national championship match.”

While Cal won the national title 43-13, the outcome is not why the game was unforgettable for Paylor.

Competing in a maul early in the game, Paylor felt pressure from the side and an arm lock around his head. With his head pinned to his chest, Paylor was illegally rode all the way to the ground. Despite many tries, Paylor was unable to get up.

“I immediately can’t feel or move anything below my neck,” Paylor said. “I’m lying there, I’m screaming as loud as I can, doing everything I can to get up, but I just can’t move. It’s hard to explain that terror, and you can feel it in your bones when you’re in a living nightmare and there’s absolutely nothing you can do to wake up.”

Paylor was stretchered off the field and rushed to Santa Clara Valley Medical Center where the doctor told him he would never walk or move his hands again.

“After this horrific prognosis, my doctor also recommended surgery to me,” Paylor said. “He says it’s my best chance at stabilizing my spine, but it’s a potentially life-threatening surgery. I’m laying there, my back on this hospital bed, thinking I woke up today thinking it was going to be the best day of my life right, D1 athlete, everything is going my way, and now after this surgery, I might not open my eyes ever again.”

Paylor chose to undergo surgery and while it was successful, the six weeks following the procedure were difficult. Not able to swallow, having pneumonia and difficulty breathing, Paylor was fighting for his life.

“I just remember looking at my body, it just withered away in front of my eyes over that month,” Paylor said. “All those years I put into building up my size, building up my physical strength – it was just shot. I lost 60 pounds in that first month.”

Once Paylor was medically stabilized, he began rehabbing at Craig Hospital in Denver, Colorado.

Expecting to find himself surrounded by sad people in similar situations, Paylor saw the opposite.

“This place was magical,” Paylor said of Craig Hospital. “People have smiles on their faces. The doctors, they looked at me and they saw potential, not some broken body.”

Paylor worked eight to nine hours a day, saying it was the hardest he had ever worked in his life. Over the next few months, Paylor went from no movement to being able to twitch a finger and a toe.

He would spend nearly a year rehabbing in Colorado. Paylor was ultimately able to walk out of his hospital room and return to Cal.

Paylor credits a large part of his success in recovery to his relationship with God.

“If I didn’t have my faith, I would’ve had nothing,” Paylor said. “When I was weak I was able to lean on God, and He carried me through all these challenges. I believe that God has a plan for us, and that plan is good.”

“Robert is a young man of incredible faith,” Mr. LeBoeuf said. “At Jesuit, he excelled in athletics and was a great witness of faith to his peers. His faith stood out among his peers. He not only talked the talk but definitely walked it.”

Mr. LeBoeuf believes members of the Jesuit community can learn from Paylor’s story.

“God gives us all gifts and the strength to persevere,” Mr. LeBoeuf said. “Robert’s faith life is a testimony to what faith in Christ is all about. He doesn’t blame God, but rather has used his experience as a platform for something greater. If any one person [could] doubt God, it is Robert. However, he relies on God and has grown in his faith through all of this. Our challenge is the same as Robert’s . . . no matter what happens, never give up on your faith or your hope.”

“I think the take away from Robert’s story is that faith in God and the faith inside each one of us can help us to overcome hardship,” Coach Shorey said.

While some at Jesuit remember Robert for being an outstanding athlete, many saw him as more than that. Jesuit rugby teammate and friend Nick Econome ’15 recalls Paylor as being an incredible leader.

“Robert was a leader,” Econome said. “As our team captain our senior year, he led both with his voice and actions, on and off the pitch. Between his ability to encourage the entire team and his relentless will to succeed, he was a phenomenal leader and teammate.”

On May 16, 2020, Paylor graduated from UC Berkeley’s Haas School of Business and gave a commencement speech for Cal athletes.

Paylor also received the Wilma Rudolph Student-Athlete Achievement Award, given to those who overcome great obstacles to reach success.

While the injury has brought about many challenges for Paylor, he doesn’t view himself as a victim. In fact, Paylor believes the injury helped him discover his purpose.

“There’s no doubt that if I didn’t get injured my life would’ve had its share of joy and successes, but I don’t think there’s any way that I would have the meaning in my life that I have now,” Paylor said. “I never thought my purpose would be this significant because I now have an ability and a desire to make a positive impact on the lives of others.”

To fulfill his newfound purpose, Paylor has decided to pursue public speaking at this time, rather than attending graduate school after graduation like he initially planned.

As he continues to tell his story as a public speaker, Paylor will have a chance to impact many communities the same way he impacted those at Jesuit. Members of the Jesuit community are extremely thankful for Robert’s zoom webinar and wish him the best as he carries on with his journey toward walking independently again.