Accomplished past leads Valedictorian Donovan Jasper ’21 towards the future 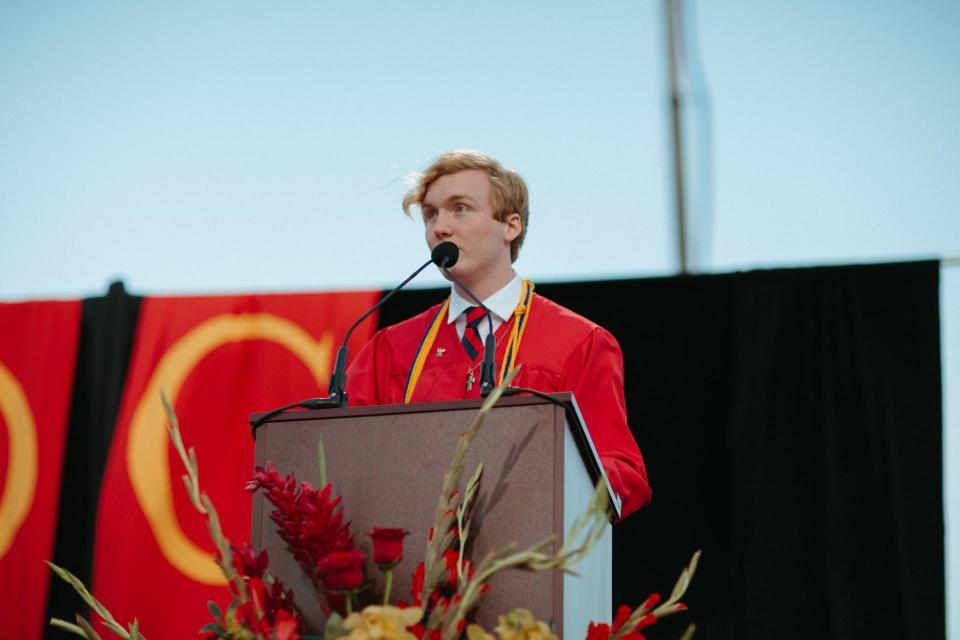 Given to a senior in recognition of his outstanding achievements during his high school years, the Valedictorian award is among the most prestigious awards that are handed out at graduation each year. For the Class of 2021 at Jesuit High School Sacramento, Donovan Jasper ’21 took home the award.

While many associate being Valedictorian with having the highest grade point average, Donovan’s impact on Jesuit went far beyond his excellence in the classroom.

Math teacher and moderator of Jesuit’s Cybersecurity Team Mr. Justin Tsai has been impressed with Donovan’s dedication to the team’s success.

Donovan has also dedicated his time and efforts to help younger kids learn about cybersecurity, as he and his teammates created their own non-profit organization to do so.

“Donovan is very headstrong and a natural leader,” Connor said. “He is not afraid to take risks. Donovan views situations from many different perspectives to find the optimal solution.”

Mr. Tsai has also been impressed with Donovan’s brilliance in the classroom and his commitment to helping others share in his successes.

“Since his freshman year in my Algebra Two Honors class, I have always been impressed with his constant pursuit of excellence and his humbleness and willingness to share,” Mr. Tsai said. “Again and again he answers the call to lead and to bring people together.”

When it was announced that Donovan had been named the Valedictorian of the Class of 2021, he took that as a moment to reflect on his time at Jesuit and he felt proud of his fellow brothers for what his class has achieved as a whole.

“I was honored and pleased [when I found out],” Donovan said. “Honestly our class is so gifted that I think there were a lot of good fits for the title. I’m proud that I was chosen, but in the end I’m happier about everything our class has accomplished these past four years.”

Next fall, Donovan will be attending Stanford University. Although he’s not fully decided on his major, he is still very excited about what his time at Stanford will hold for him.

“Stanford has been my goal for quite a long time because it is excellent and close [to home], but not too close,” Donovan said. “Since I’m not entirely sure of my major, it is good to know that such a broad array of majors are so beautifully supported. The opportunities actually boggle the mind, or at least they boggle mine.”

Donovan’s aspirations for the future are inspired by what he’s learned from others at Jesuit High School.

“My goal is to grow as a man for others from within a loving, mutually supportive family,” Donovan said. “My experience with Mr. Tsai and Echelon Catapult causes me to be thinking just now in terms of starting a company that would take on a societal need that hasn’t been adequately addressed. I seek a meaningful career.”

Regardless of what Donovan pursues in the future, it is certain that he will continue to impress and make a positive impact on others with his excellence, humbleness, and integrity as he has done during his four years at Jesuit.