Behind the camera: how Damian Brunton ’21 became a TikTok celebrity 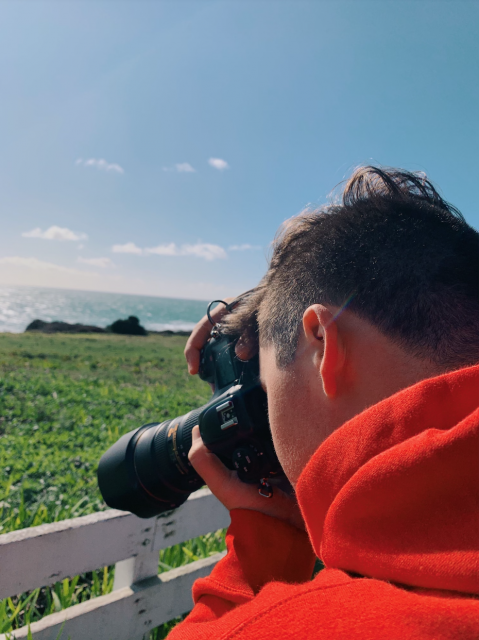 After tearing his ACL while playing club soccer his freshman year at Jesuit High School Sacramento, Damian Brunton ’21 was at his lowest point — unable to pursue his passion of soccer for an extended period of time.

“I felt like I had hit rock bottom because all I was doing was playing soccer, and that’s all I wanted to do with my whole life was just soccer, soccer, soccer,” Damian said. “When I tore my ACL, I couldn’t play for nine months to a year and so I was like, ‘What do I do? I can’t move, I can’t do anything.’”

While Damian was unsure of what to do, his father, a professional photographer, had the perfect idea.

“My dad was always like ‘film something with your camera for Tiktok’ and I was like ‘dude that’s stupid, why would I do that? That’s so dumb. You literally have the worst advice for me,’” Damian said. “And he was like ‘no trust me’”.

Fast forward to his senior year and Damian has more than 500,000 followers on TikTok, a social media platform where users can upload short videos that typically involve dancing, comedy, and a variety of other genres.

Damian’s TikToks fit into a number of different categories, but most of his content involves a well-known TikToker dancing to a popular song before a montage of photos comes in. Much of the attention he’s received comes from the ridiculously high quality of his videos.

“The camera work sticks out because that’s the first thing people notice about [his videos],” said Sam Oshita ’21, Damian’s friend and classmate. “It’s more like his insane videography work and how clear the camera is. [People] are amazed about the insane camera quality.”

Through working with countless creators, Damian has built many work-like relationships and even friendships in some cases. These relationships benefit both parties as the heavily-followed TikTokers generate more views to Damian’s page while Damian’s camera skills and creativity have improved the content of the people he’s filmed. In other words, Damian’s videos benefit all involved.

Probably the closest relationship Damian has formed through TikTok has been with Dylan Overstreet, who goes under the handle “thattkiddylan.” A running back at Casa Roble High School and one of the best football players in the Greater Sacramento Area, Dylan reached out to Damian to shoot a video of him playing football.

But after seeing a viral dancing video filmed by Damian, Dylan said “we don’t have to film a football video, we can just film one of these” according to Damian.

Before Damian filmed him for the first time, Dylan had roughly 116,000 followers. As of May 7, Dylan has 1.6 million followers with Damian shooting and editing almost all of his videos.

The pair have essentially blown up together, and on January 6, 2021, Damian and Dylan traveled to Los Angeles to collaborate with some of TikTok’s biggest stars.

“We collaborated with [Sharlize True and Gabriella Saraivah] on the sixth,” Damian said.  “On the seventh, we collaborated with Gabriella again, and later that day we went over to [Just A House] with Anna Shumate and those videos literally got 2.4 and 2.3 million likes. It was just crazy filming with all of them.”

Damian’s work has even gained the attention of his teachers. Jesuit Yearbook and Math Teacher Mr. Chris Chandley ’93 is proud to have taught Damian.

“I’m thrilled that Damian’s talents are being recognized and that he has blown up on TikTok,” Mr. Chandley said. “And I’m not surprised. He has a great eye for photography and videography, and he has a knack for video editing. I’ve watched a few YouTube videos about Content Creator houses in L.A. and elsewhere, and it’s so cool to think, ‘Damian’s actually doing that!’”

Looking to continue his work after high school and be near Los Angeles, Damian will be attending college at California Lutheran University in Thousand Oaks. He will major in business marketing.

Going from an injured soccer player who felt he was without a purpose to a TikTok star, Damian has grown a lot during his four years at Jesuit. As he starts a new chapter of his life in college, he’ll look to continue growing his skills and building productive relationships through the work he does.