Michael Chambers ’21, a true embodiment of the Grad-at-Grad values 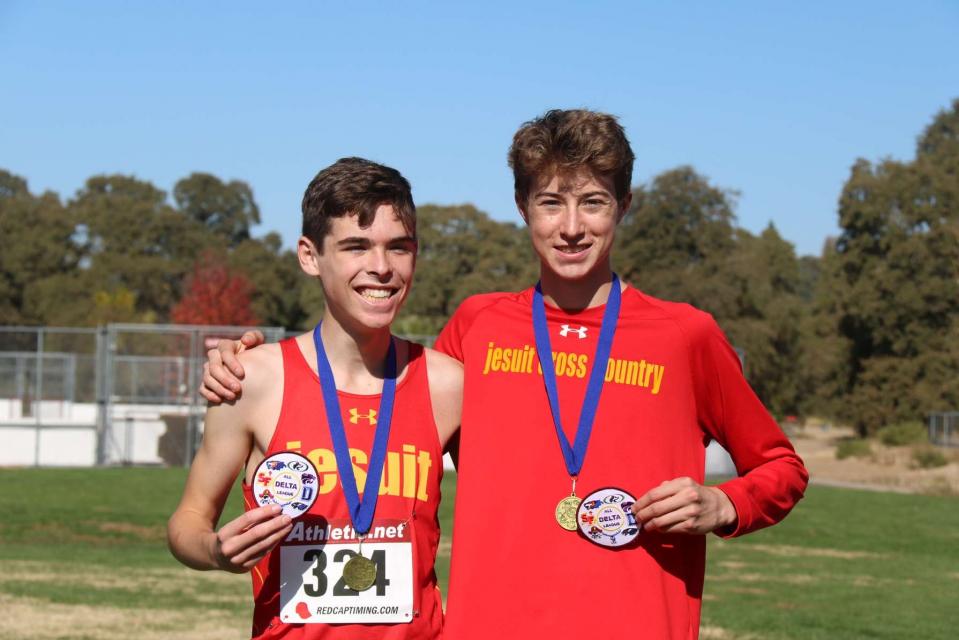 An exceptional student, athlete, and religious leader, Michael Chambers ’21 is a remarkable example of the hope that Jesuit High School Sacramento has for all its students.

Michael’s living embodiment of Jesuit’s educational mission was reflected and honored when he was given the Ignatian Award, which recognizes a Senior who has been deemed most outstanding in all phases of school life. For those who have worked with Michael, his reception of the award was predictable.

“Michael epitomizes what Jesuit expects of its students and graduates,” said Cross Country Coach and Science teacher Mr. Nick Lai. “Michael is a leader across campus. You can hear it in the sincerity of his morning prayers and afternoon Examens. You can see it on the track and in cross country. He motivates his teammates to be better athletes and better people. His work ethic is unmatched. He is a role model that other students can look up to.”

According to Mr. Lai, Michael’s leadership abilities were extremely evident during the pandemic.

“During the lockdowns, Michael encouraged his teammates to continue training and stay in shape through Zoom meetings and runs along the bike trail,” Mr. Lai said. “He has been instrumental in providing guidance for our new and younger runners and he was motivated to implement a big brother program on the cross country team. He always puts his team ahead of himself.”

Mrs. Kelly Barnes, the assistant director of Campus Ministry, has spent a lot of time with Michael. Like Mr. Lai, Mrs. Barnes believes Michael fits the Profile of a Jesuit Graduate.

“When I look at the list of attributes we hope to nurture in our students, Michael is the embodiment of all 5 Grad at Grad qualities: Loving, Committed to Doing Justice, Open to Growth, Religious and Intellectually Competent,” Mrs. Barnes said. “He uses his gifts and talents to serve others and accomplish his goals in a remarkably humble manner.”

Michael credits Jesuit for teaching him the importance of getting involved in the community and helping others.

“It can be easy to focus on myself, but Jesuit has taught me to think on a broader scale and try to make the lives of others better,” Michael said. “Whether through service projects or simple acts of kindness, serving others has become second nature to me.”

Michael also believes that practicing good habits has contributed to his success.

“What has helped me the most at Jesuit has been developing a routine,” Michael said. “It can be tough to get work done sometimes, but having a good sleep schedule, going to school and practice and then coming home and doing homework has allowed me to be productive.”

With his time at Jesuit now over, Michael offers up some guidance to current students.

“The main piece of advice that I give to Jesuit students on how to be successful is to get involved in as many aspects of campus life as possible,” Michael said. “Jesuit has so much to offer including clubs, sports, student outreach, and ministry. I did my best to join every club and team that I thought would be fun and it helped me find what my interests were and also grow as a person. I didn’t end up liking everything, but I found what I do truly enjoy and I’m thankful that I did.”

While doing so much for his peers as a leader, Michael has left a clear mark on Jesuit. Michael plans on continuing to lead and be a role model as he heads to Cal Poly San Luis Obispo for college.