Mid-Week Support Wednesdays, a multi-purpose day that gives the Jesuit Community a break from screens 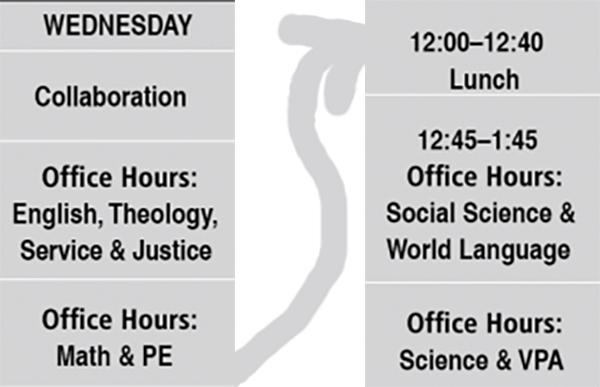 At the start of the second quarter at Jesuit High School Sacramento, a schedule change was made. The new addition was Mid-Week Support Wednesdays, a day off from classes breaking up  the school week to provide students a break from the hard work they have been doing and to take time to recuperate.

At the end of the first quarter, Jesuit sent out a survey to students and parents to get feedback on how classes had been going. Dr. Fadia Desmond, the assistant principal for instruction and student life, said that the feedback from the surveys was one of the main driving forces behind the schedule change, as well as reaching out to other Jesuit schools to learn about what their schedules were like.

“The need for a little less screen time and along with that the need for extra support and extra resources came through to us in the survey data we got,” Ms. Desmond said. “[We also] reached out to other Jesuit schools both in our province but also all around the United States.”

The extra resources being offered to students on Mid-Week Support Wednesdays include rotational department office hours being held by all teachers for their classes.

“I think it’s great having office hours, [and] deliberate time which students can take advantage of and it’s nice and organized in one place which I think is super advantageous and really helpful,” said Physics Teacher Mr. Lawrence Simon. “It’s a great opportunity to get caught up where you need to.”

Mr. Nick Lai, another teacher in the science department, also thinks that these new Mid-Week support Wednesdays will be helpful to students.

“I think [Mid-Week Support Wednesdays] can be really helpful for students who have a lot of other things going on in their lives outside of school,” Mr. Lai said. “For some students, it’ll be a nice time to catch up on everything that’s going on for the week. For others maybe it’s a chance to get ahead, a chance to talk to their teachers, or a chance for them to take some time for their own mental health and well-being.”

Along with using the day off from classes to get caught up on schoolwork, students are encouraged to use the day to relax and take some time off from the computer screen.

“I’ll definitely take it as a time to relax,” said Michael Chambers ‘21. “I like the asynchronous day, it’s nice to have a break from staring at a screen for a couple [of] hours a day.  . I think overall it will help the wellness of the school and the kids’ grades as a whole.”

Mr. Simon also emphasized the importance of taking a break from classes and spending time doing things other than school.

“[Students should] carve out some time to take a break,” Mr. Simon said. “I literally go home and play FIFA; it’s the best. From the student’s standpoint, I think it’s nice to have that day to just chill, play PlayStation, things like that.”

Also, the implementation of Mid-Week Support Wednesdays helps allow Jesuit to follow the COVID-19 guidelines that are in place to ensure that students and faculty members are staying safe when they are on campus. Jesuit’s student body is split into a Red group and a Gold group, and the new four-day school weeks allow the two groupings to have the opportunity to be on campus for two days each.

“There’s a part of the schedule that has to do with the new Red and Gold groupings that works quite nicely,” Ms. Desmond said. “There’s that kind of logistical part of the new schedule that works very well for reducing the number of students on campus and in classes which allows us to follow all of our virus mitigation procedures and all the details laid out in our safe return plan.”

Whether it’s giving students an opportunity to seek help during office hours, allowing teachers to catch up on grading and other tasks, or a chance for all to get away from the screen and do other activities, Mid-Week Support Wednesdays have been much appreciated by the Jesuit community.